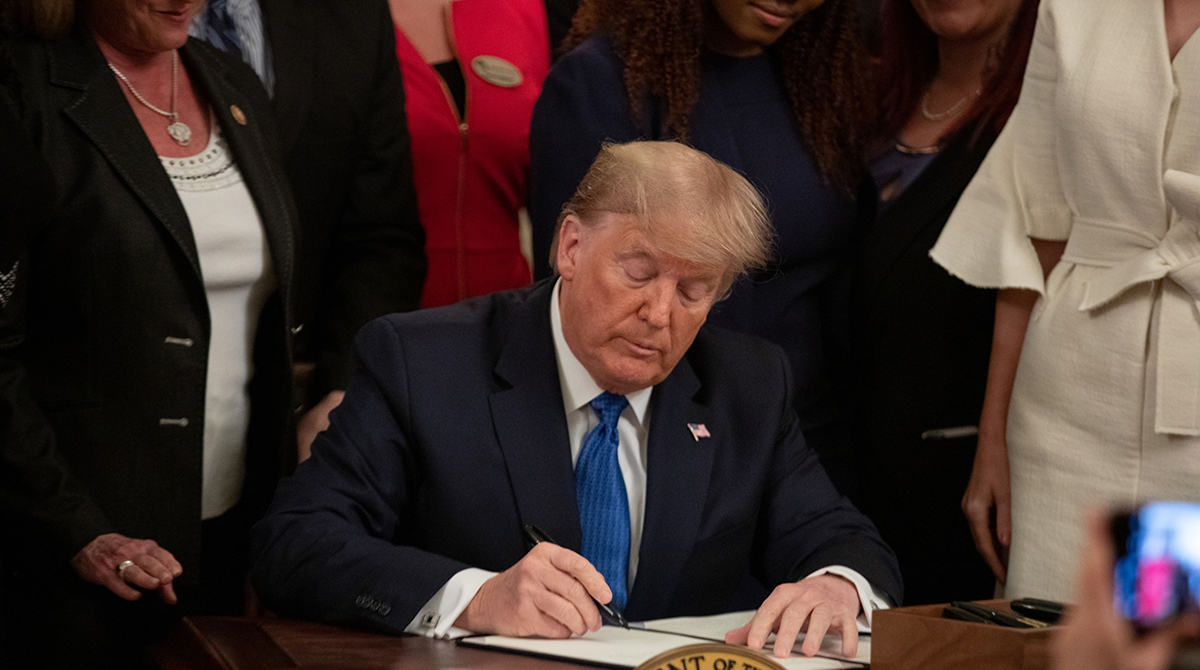 U.S. President Donald Trump signs an executive order during a summit on the 20th Anniversary of the Trafficking Victims Protection Act of 2000. (Amanda Andrade-Rhoades/Bloomberg News)

President Donald Trump has signed an executive order that is meant to help fight human trafficking and sexual exploitation, which is one of the trucking industry’s biggest initiatives.

The “Executive Order on Combating Human Trafficking and Online Child Exploitation in the United States” dedicates a full-time position at the White House to fighting these crimes. The Domestic Policy Council will commit one employee to fill this role. This person will coordinate with staff members in other White House offices, such as the National Security Council and the Office of Economic Initiatives.

Human trafficking is believed to be one of the largest criminal activities in the world—with an estimated 24.9 MILLION people trapped in forced labor, domestic servitude, or commercial sex trafficking. pic.twitter.com/rZZFyEj9Tp — The White House (@WhiteHouse) January 31, 2020

Human trafficking, which involves the use of force to obtain labor or a commercial sex act, exploits about 25 million people, according to the Department of Transportation’s Advisory Committee on Human Trafficking.

The order also tasks Attorney General William Barr and Acting Secretary of Homeland Security Chad Wolf to work with other agencies to create a list of actions to help overcome barriers to information sharing and present that list to the president within the next 180 days.

Leaders from the Departments of Health and Human Services and Housing and Urban Development are charged with developing a working group to craft strategies for state and local government agencies and community organizations to expand housing options for victims of human trafficking.

“This order will build on the incredible work that’s being done,” Trump said.

During an event at DOT’s headquarters Jan. 28, Chao emphasized an agency initiative to fight human trafficking before a mass of industry representatives and state transportation leaders.

Specifically, Chao placed a renewed focus on the Transportation Leaders Against Human Trafficking pledge, which calls on participants to educate employees on how to recognize signs of human trafficking, raise awareness about the issue through outreach campaigns and measure the industry’s impact on human trafficking by sharing data. Chao asked the transportation industry to commit to 100 pledges in 100 days.

DOT’s Transportation Leaders Against Human Trafficking initiative, which was formed in 2012, is a group of transportation and travel industry representatives who connect groups to resources on training, policy development and public awareness.

Several transportation industry representatives, including Kendis Paris, executive director of Truckers Against Trafficking, were represented at DOT’s event. Paris served on DOT’s Advisory Committee on Human Trafficking this past year. The committee’s final report, submitted July 2, indicates that, from 2007 to 2018, people identifying themselves as truckers made 2,250 calls to the National Human Trafficking Hotline.

“Truckers Against Trafficking is very proud to partner with DOT in combating this heinous crime,” Paris told Transport Topics. “We also salute Secretary Chao’s leadership in harnessing the power and potential of transportation in closing loopholes to human traffickers and the valuable role professional drivers especially have to play in this effort.”