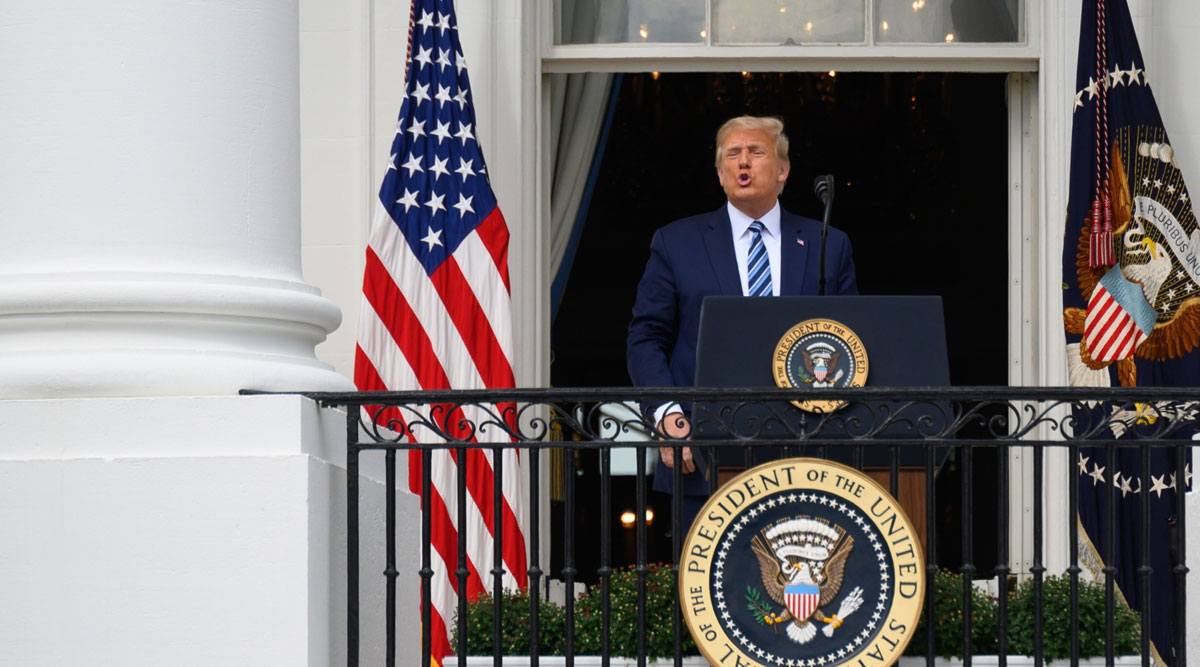 President Trump speaks from the Truman Balcony of the White House during a campaign event on Oct. 10. (Erin Scott/Bloomberg News)

McConnell’s proposal to vote next week on just one provision — replenishing funds in the Paycheck Protection Program for small businesses — appeared to stoke opposition even from President Donald Trump, who tweeted “Go big or go home!!”

Pelosi told House Democrats on a call Oct. 13 that McConnell’s proposal was a nonstarter, according to participants. She warned that Democratic priorities would be cut in any deal based on such an agreement, they said. In the wake of Trump’s “go big” tweet, she told colleagues that the Democratic side has more leverage than ever, three participants said.

McConnell made the argument Oct. 13 that some deal is better than none, saying Democrats are ignoring areas of bipartisan agreement to hold out for a bill that includes measures unrelated to the virus response.

“Republicans do not agree that nothing is better than something for working families,” McConnell said in a statement. “The American people need Democrats to stop blocking bipartisan funding and let us replenish the PPP before more Americans lose their jobs needlessly.”

The latest positioning followed talks between Pelosi and Treasury Secretary Steven Mnuchin over the weekend on the Trump administration’s new $1.8 trillion proposal that failed to yield a compromise. The two plan to continue talking, according to a person familiar with the negotiations.

“Tragically, the Trump proposal falls significantly short of what this pandemic and deep recession demand,” Pelosi said in a letter to colleagues earlier Oct. 13. “Significant changes must be made to remedy the Trump proposal’s deficiencies.”

With three weeks to go until Election Day, Trump has tried to re-energize the stimulus talks, upping his offer from an earlier $1.6 trillion. While the president is pushing Republicans to a spending level closer to the $2.2 trillion bill from House Democrats, the two sides remain far apart on several issues of policy, including how to deploy health care aid and apportion tax credits.

“A fly on the wall or wherever else it might land in the Oval Office tells me that the President only wants his name on a check to go out before Election Day and for the market to go up,” Pelosi wrote in the letter.

The speaker noted that Trump had sent his team back into stimulus negotiations last week after his withdrawal on Oct. 13 triggered a sell-off in the equity market.

McConnell, who previously warned that some in the GOP won’t back another large stimulus package, has said there probably isn’t enough time to get any large-scale deal passed before the election.

Mnuchin and White House Chief of Staff Mark Meadows briefed some Senate Republicans on aspects of the president’s offer on Oct. 10, but they were told any deal that ends up around $2 trillion is too much, according to people familiar with the discussion. One person said the proposal would get few GOP votes without major changes.

While Pelosi’s top deputy, Majority Leader Steny Hoyer, said members could return to Washington before the election if there’s a stimulus deal to be voted on, he said on the caucus call that the chamber’s post-election plan is to return Nov. 16, according to a call participant.

The speaker is seeking to tamp down any restlessness among Democrats to take what the White House is offering after Trump enlarged his proposal. On Oct. 11 she called the administration’s offer a “miserable and deadly failure.” Trump accused her of dragging out talks in an attempt to “influence the election.”

The speaker has been deploying her lieutenants to explain why the White House’s proposal isn’t worth accepting.

Five committee chairs in recent days released statements supporting Pelosi’s bargaining position, detailing topic-by-topic what they view as wrong with the offer — including failure to adopt the Democrats’ child tax credit, insufficient childcare help and not enough support for some small businesses.