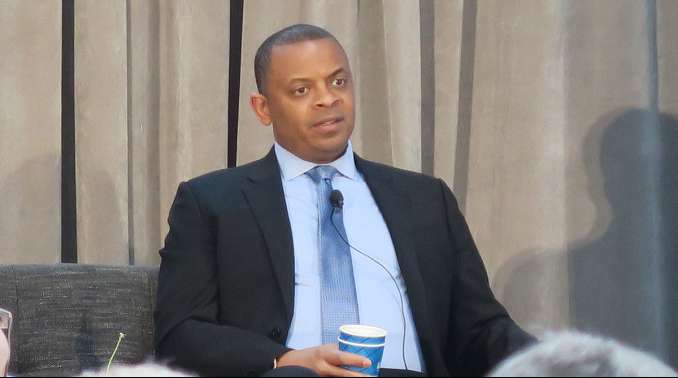 “If transportation gets whizzed out by technology, we forget that it’s still about people,” said Anthony Foxx, former Transportation Secretary and now chief policy officer of Lyft. (Eleanor Lamb/Transport Topics)

WASHINGTON — As cities continue to grow and infrastructure rapidly incorporates more technology, former Transportation Secretary Anthony Foxx cautioned industry leaders and experts to remember the humans who will be affected.

Infrastructure should be the connective tissue that links communities rather than alienates them, said Foxx, now chief policy officer at transportation and ride-sharing company Lyft.

“If transportation gets whizzed out by technology, we forget that it’s still about people,” Foxx said May 13 while addressing an Infrastructure Week kickoff event. “It is a fact that we need to build more, and better, infrastructure, but we also need to imagine it in a better way than we had in the past.” 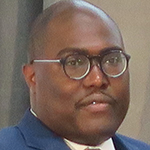 Frank Scott Jr., mayor of Little Rock, Ark., agreed, citing for example how Interstate 630, an 8-mile east-west connector in Little Rock, creates an economic dividing line in the city. The population south of the interstate is largely comprised of lower income communities, he said.

The kickoff event was attended by trade associations, policy groups and government leaders, although current Transportation Secretary Elaine Chao was not present.

Many leaders at the state and local levels have expressed the need for increased funding from the federal government. President Donald Trump and congressional Democrats agreed in April to work on a $2 trillion infrastructure package. The plan still lacks details about fundraising. 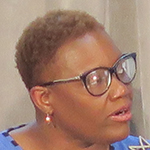 Karen Freeman-Wilson, mayor of Gary, Ind., said cities and counties can benefit from a federal partner that is motivated and willing to listen.

“Sometimes you can be removed from what’s going on at the local level when you’re in Washington,” said Freeman-Wilson, who also serves as president of the National League of Cities. “There has to be a clear commitment, and it has to get beyond politics as usual.”

Robert Puentes, president of the Eno Center for Transportation, emphasized the need to consider the entire lifecycle cost of transportation projects rather than just the initial costs. He urged audience members to move away from thinking of the ribbon-cutting ceremony as “the cool thing” that marks the sole definitive point of a project’s life.

Gary Moore, judge-executive of Boone County, Ky., highlighted the dilapidated Brent Spence Bridge, which has issues that have spanned multiple political terms. The Brent Spence Bridge carries interstates 71 and 75 over the Ohio River. Moore said three presidents, including the current one, have stood on the bridge and vowed to fix it.

“We’re hopeful that whatever happens with the infrastructure bill, that there is attention given to these projects of national significance,” said Moore, who also serves as vice chairman of the National Association of Counties.

Early iterations of the federal infrastructure package stressed the importance of public-private partnerships (P3s) for transportation projects. Freeman-Wilson mentioned her administration is working on a P3 to improve intermodal access to Buffington Harbor, home to restaurants, hotels and casino boats.

Congressional Democrats have supported the idea of a stronger federal partner. House Speaker Nancy Pelosi has said that an infrastructure package should stipulate that about 20% of the funds would stem from nonfederal contributions.