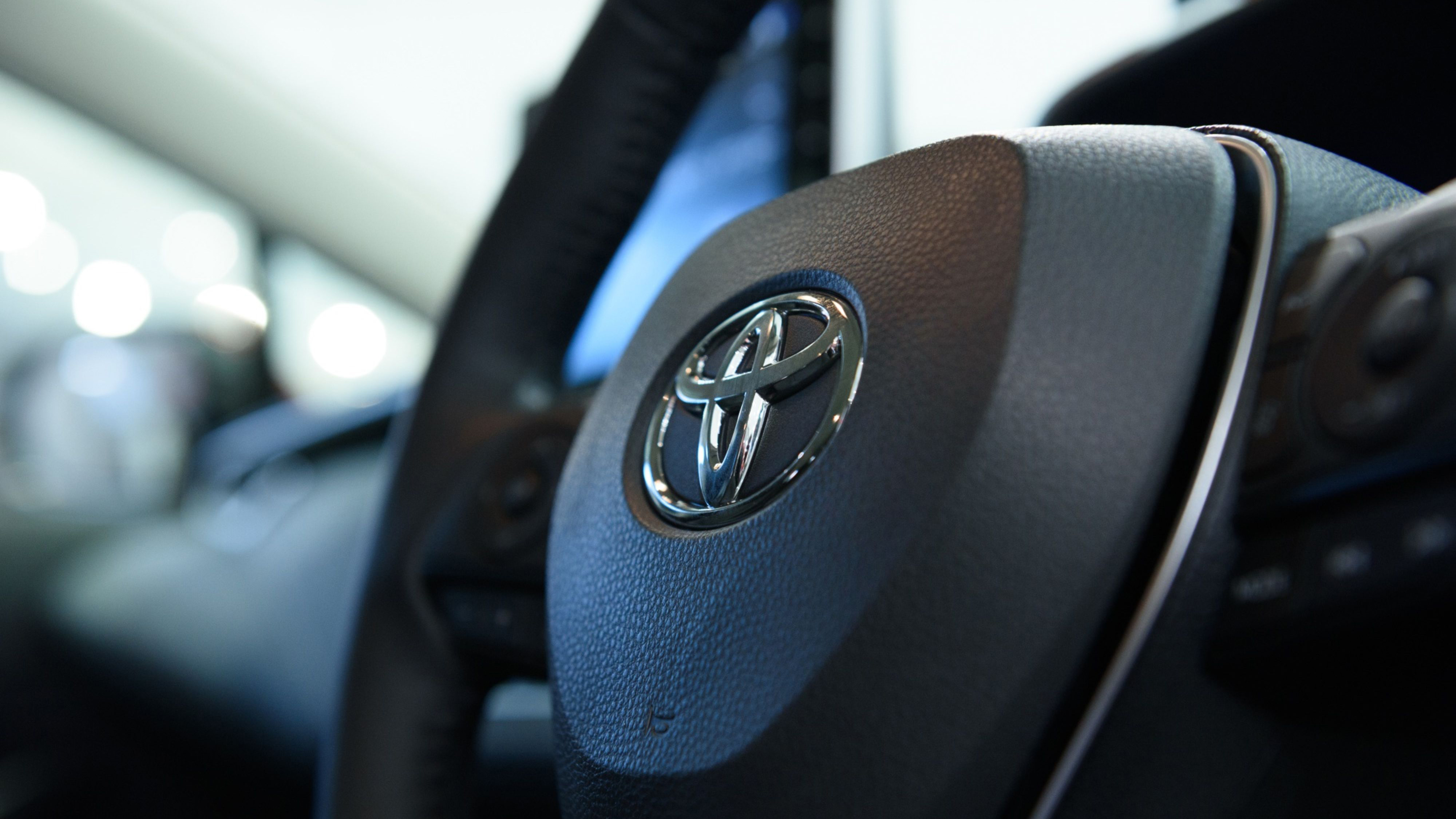 The Toyota Motor Corp. badge sits on a steering wheel of the company's Corolla Touring vehicle during an unveiling event in Tokyo, Japan. (Akio Kon/Bloomberg News)

Toyota Motor Corp.’s efforts to stockpile enough chips and other key components to ride out supply disruptions only protected the company so long before it too succumbed to the shortages eviscerating automakers.

The manufacturer will suspend production at 14 plants across Japan for various lengths of time through next month. The impact of these cuts will be harshest in September, with Toyota slashing its production plan by 40%, though risks will carry forward beyond next month.

It is the latest sign even the best supply chain planning is proving no match for a pandemic that virtually ground the auto industry to a halt a year ago and has plagued efforts to restore production. Toyota and BMW AG — two manufacturers least scathed by the semiconductor shortage in the first half — now have warned of significant blows to their operations in the coming months.

“This isn’t a Toyota-only problem,” said Tetsuo Seshimo, a fund manager at Saison Asset Management Co. “But the fact that this is happening at Toyota means that recent worries about the supply chain in Asia being disrupted by the spread of the coronavirus are materializing. There are a lot of companies manufacturing goods in Asia that could be impacted.”

Toyota said 27 production lines in Japan will be impacted, affecting production of models including the RAV4, Corolla, Prius, Camry and Lexus RX. The news — first reported by the Nikkei — took the market by surprise, with investors sending Toyota shares down 4.4%, their biggest daily drop since December 2018.

“Especially in Southeast Asia, the spread of COVID and lockdowns are impacting our local suppliers,” Kazunari Kumakura, the chief officer of Toyota’s purchasing group, said Aug. 19. Going forward, the company will look at ways to further diversify its supply chains to not focus on one region and is attempting to find replacement parts from suppliers in other regions.

Production cuts had been factored into earlier forecasts, so Toyota is maintaining its plan to produce 9.3 million vehicles for the fiscal year ending in March. The company maintained its annual operating profit projection earlier this month at 2.5 trillion yen ($22.7 billion) for the fiscal year through March, below analysts’ average projection for 2.95 trillion yen.

Early on in the chip shortage that began late last year, Toyota was lauded for its supply chain savvy. The company has an intricate system in place to monitor its vast network of suppliers and has an early warning system for shortages.

That may be no match for a pandemic that’s confounding scientists, governments and public-health officials, sparking fresh lockdowns around the world and wreaking more havoc on a vast array of industries.

BMW recently warned of uncertain months ahead as the global chip shortage worsens. After saying early this year it had ordered enough semiconductors and expected its suppliers to deliver, the luxury-car manufacturer now expects production restrictions in the second half.

Volkswagen AG also has flagged worsening supply woes, while Daimler AG dialed back its delivery expectations due to the shortage.

According to research by Susquehanna Financial Group, the amount of time it’s taking for chip-starved companies to get orders filled has stretched to more than 20 weeks, indicating the shortages that have held back automakers and computer manufacturers are getting worse.

“Companies were saying it was a problem for the first half, but it’s astonishing what kind of strong figures they reached,” said Frank Schwope, an autos analyst at NordLB in Hanover. “But now, the chip shortage is coming in dramatically, showing that there must be some serious problems.”