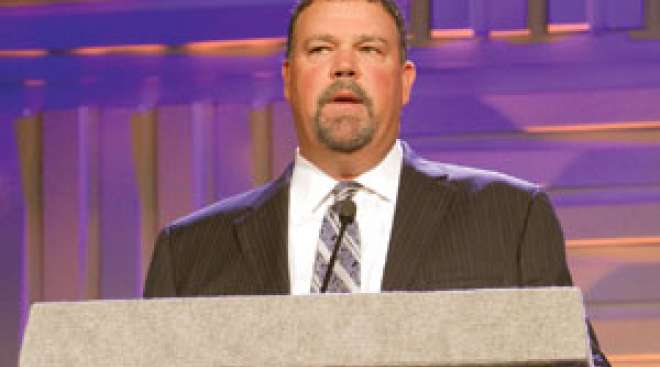 This story appears in the March 14 print edition of Transport Topics.

LAS VEGAS — The Truckload Carriers Association has changed its truck weight policy, breaking with American Trucking Associations on the issue and putting the groups at loggerheads for the second time in several months.

TCA’s board decided to endorse the existing 80,000-pound limit on five axles, with the provision that its Highway Policy Committee would be convened to consider changes if there is any indication Congress will take up the issue again. The vote took place at its annual meeting here last week.

The two trucking groups in 2011 heralded the unification of truck size and weight, settling on 88,000 pounds on five axles and 97,000 pounds on six as a common goal, designed to offer greater productivity than the existing standard. For more than two decades, federal truck weight has been frozen at 80,000 pounds, except in states with grandfathered higher limits.

“This [80,000 pounds] is the law of the land, and we are going to support that,” said Russell Stubbs, the new TCA chairman and CEO of FFE Holdings. “If something comes up that makes sense, we will look at it. TCA will be collaborative with other organizations when it makes sense but it will never put TCA’s goals at risk.”

The new differences on truck weight emerged several months after an initial split between the two groups over a policy debate in Congress that would have allowed 33-foot trailers, offering an 18% productivity increase to benefit package and less-than-truckload carriers. TCA opposed that ATA initiative.

Policy differences between the two groups aren’t new. TCA, with a diverse membership that includes some carriers seeking higher weight limits and others that prefer no changes, and ATA supported different standards for more than a decade prior to 2011.

“The action by the Truckload Carriers Association board of directors continues to highlight the difference of opinion within the trucking industry about improving truck productivity,” ATA President Bill Graves told TT. “We should not expect our public officials to find solutions to problems the trucking industry doesn’t agree upon.”

While the policy stances differ, there currently is no size-and-weight legislation pending in Congress that could either prompt a TCA review or provide a vehicle for ATA to pursue its agenda, including a 97,000-pound limit, 33-foot trailers and harmonizing of size-and-weight rules.

Stubbs noted the two organizations still have much in common. For example, former TCA chairmen Barry Pottle and Kevin Burch are both in line to become chairman of ATA. Stubbs previously was on ATA’s policy committee.

Stubbs, whose grandfather Stoney became TCA chairman in 1967 and whose father Mit headed the group in 1996, praised outgoing chairman Keith Tuttle for a “wonderful, monumental effort” in leading the organization during its transition that led to the arrival of new president John Lyboldt in December.

Lyboldt, a former National Automobile Dealers Association executive, replaced Brad Bentley, who left in August after less than a year on the job.

“I have learned that trucking, my friends, is often measured in capacity. It can be low or it can be high, but for the association it must be limitless,” Lyboldt said.

Both Stubbs and Lyboldt said that they are going to emphasize new membership, using a peer-to-peer approach that focuses on the personal touch and face-to-face interaction to increase the current 700-plus members.

“We are on a mission to double down with the basics,” Stubbs said.

The issues remain the same, Stubbs said, including regulatory and legislative concerns, such as hours of service, the Federal Aviation Administration Authorization Act, electronic logging devices, wellness and education.

Lyboldt stressed his intention to run TCA like a business, consistent with a focus on helping members to improve their profitability. He also said TCA is evaluating whether it is trying to do too much.

One area that is being expanded is benchmarking, including the Web-based service known as InGauge. Benchmarking has helped participants to lower their operating ratio by 6.2 points on average, while more than doubling gross profit.

“We are going to talk about truckload again and again,” Lyboldt said, stressing the fact that truckload freight is two-thirds of all freight moved in the industry.

“Trucking is trucking to the average Joe — it’s not understood,” he said. “They may think of UPS, FedEx or YRC. They don’t know truckload because it’s so fragmented with the largest carrier accounting for just 1% of the industry.”

UPS, FedEx and YRC Worldwide rank Nos. 1, 2 and 5, respectively, on the Transport Topics List of the Top 100 largest U.S. and Canadian for-hire carriers.