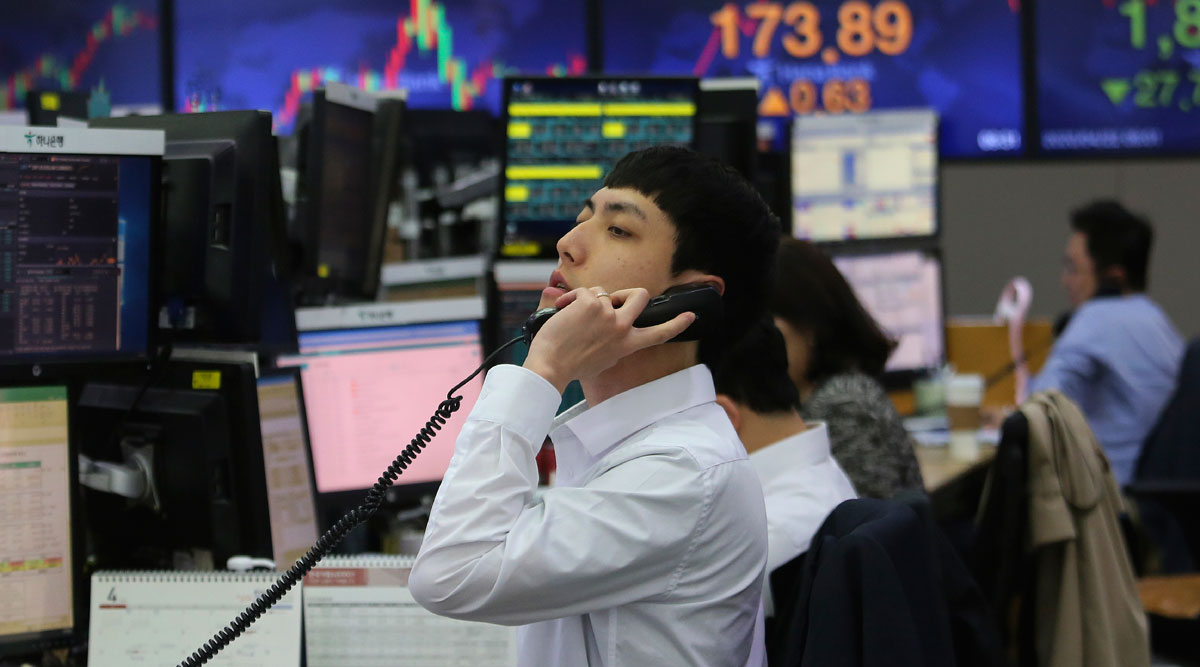 A currency trader talks on the phone at the foreign exchange dealing room of the KEB Hana Bank headquarters in Seoul, South Korea, on April 22. (Ahn Young-joon/Associated Press)

Stocks around the world are clawing higher on April 22, and the S&P 500 climbed toward its first gain of what’s been a dismal week.

Even the oil market gained ground. Prices for crude have been turned upside down because of how much extra oil is sloshing around following a collapse in demand. U.S. oil jumped 23% after President Donald Trump threatened the destruction of any Iranian gunboats that harass U.S. Navy ships, raising the possibility of a disruption to oil supplies.

The S&P 500 was up 1.9% in midday trading, following up on milder gains in Europe and Asia. Treasury yields also inched higher in a sign of a bit less pessimism in the market.

U.S. stocks, though, are still down about 3% for the week as a rally that had been carrying the market since late March threatens to lose steam.

Energy stocks jumped to the market’s biggest gains, riding the ripple of strengthening oil prices. Energy Halliburton jumped more than 10%, while Diamondback Energy and Occidental Petroleum both added more than 6%. All three, though, remain down more than 60% for the year so far.

A barrel of U.S. oil to be delivered in June jumped to $14.24. It had zig-zagged overnight and was close to flat earlier in the morning, before Trump’s tweet. The big gain, though, means it’s recovered just a fraction of its steep losses. It was at nearly $30 at the start of last week and $60 at the beginning of the year.

Brent crude, the international standard, climbed 5% to $20.30 per barrel.

Other companies that have been big losers due to the coronavirus pandemic also rose after offering some slight hints of hope.

Chipotle Mexican Grill, for example, said that a key sales figure plunged 16% in March on widespread stay-at-home orders. But it hit a bottom during the week of March 29, down 35%, and has since improved a bit. Declines the past week were “in the high teens.” Its shares rose 9%.

Stocks of companies that have been winners in the new stuck-at-home economy, meanwhile, are also telling investors just how much they’ve been benefiting.

With people hunkered inside and craving communication, Snap said that the number of active users on Snapchat each day jumped 20% in the first three months, versus a year ago. They created more than 4 billion Snaps each day, on average. Revenue beat Wall Street’s expectations, and Snap shares jumped 27%. 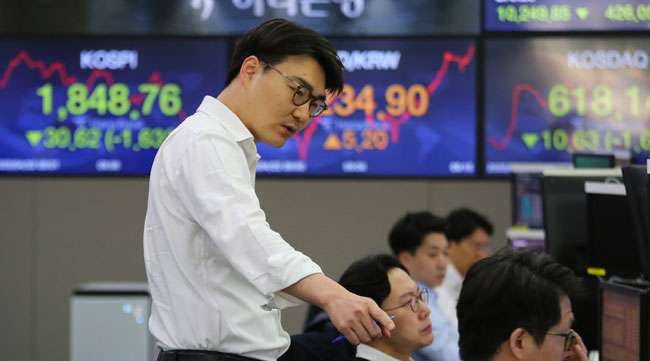 Netflix has also been a big winner as people look to fill their time, with shares recently hitting a record. It said late April 21 that it added nearly 16 million global subscribers in the first three months of the year. But shares slipped nearly 2% April 22 after its profits didn’t quite live up to Wall Street’s lofty expectations.

Toilet paper has also been hugely in demand, and the maker of Cottonelle said its sales benefited in the first three months of the year as customers stocked up on that and Kleenex tissue, among other items. But shares of Kimberly-Clark flipped between gains and losses after it retracted its financial forecasts for 2020 given how uncertain the global economy is due to the COVID-19 outbreak.

It joined a lengthening line of companies pulling their guidance, and it also suspended its stock buyback program until at least the end of June.

The Senate late April 21 approved a $483 billion proposal to deliver more loans to small businesses and aid to hospitals. The House is expected to vote on it April 23.

The new bill would come on top of more than $2 trillion in aid that Congress has already approved. That, plus massive support for markets from the Federal Reserve, have helped the S&P 500 to rise more than 24% since a low in late March. The index has roughly halved its loss from its record set in February, which at one point was roughly 34%.

The global economy has come to a virtual standstill amid widespread stay-at-home orders, and economists expect a report on April 23 to show that another 4 million-plus workers filed for unemployment benefits last week. That would be on top of the roughly 22 million workers who had filed in the earlier four weeks, as layoffs sweep the nation.