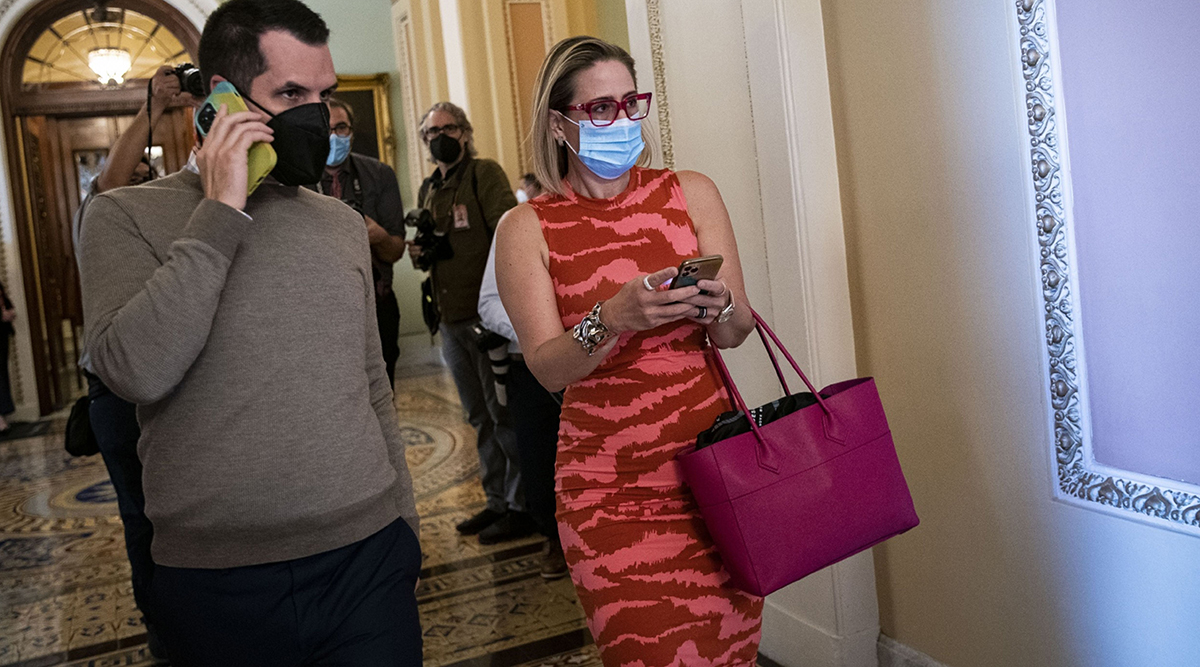 Sen. Kyrsten Sinema, a Democrat from Arizona, departs following a vote in the U.S. Capitol on Sept. 30. (Al Drago/Associated Press)

Sen. Kyrsten Sinema criticized House liberals on Oct. 2 for delaying a vote on the bipartisan infrastructure bill she helped negotiate, blaming them for eroding trust in elected officials.

The unusually withering public statement from the Arizona Democrat, who has sought to keep her negotiations with President Joe Biden private, shows the depth of mistrust that has developed between factions of the Democratic Party.

“I have never, and would never, agree to any bargain that would hold one piece of legislation hostage to another,” Sinema said.

Speaker Nancy Pelosi, faced with demands by progressives to link the plan’s fate to a bigger reconciliation package of social spending and tax increases, on Oct. 1 backed off a pledge to bring the infrastructure bill to a House vote this week. The Senate passed the plan in August.

The House’s failure to vote on the infrastructure bill “is inexcusable, and deeply disappointing for communities across our country,” Sinema said. It also “betrays the trust the American people have placed in their elected leaders,” she said.

Pelosi on Oct. 2 provided House Democrats with a new Oct. 31 target date to pass the stalled bill, saying she didn’t bring the measure to a vote because it would have been defeated. Biden, who intervened on Oct. 1 to reset the timeline on the two bills, told reporters he’s confident that both will pass.

Sinema, a first-term U.S. senator, also hit out at her party’s leadership.

“Democratic leaders have made conflicting promises that could not all be kept — and have, at times, pretended that differences of opinion within our party did not exist,” she said.

Sinema led negotiations with Republican Sen. Rob Portman on the infrastructure bill in the Senate. She has favored the quick passage on infrastructure after withholding support for the bigger package.

While that bill started out with a top-line number of $3.5 trillion, Biden said Oct. 1 that the upper limit of the social-spending plan has ranged as high as $2.3 trillion over 10 years in his talks with Sinema and West Virginia’s Joe Manchin, the other key holdout among Democratic senators.