Robots Take On the Final Mile 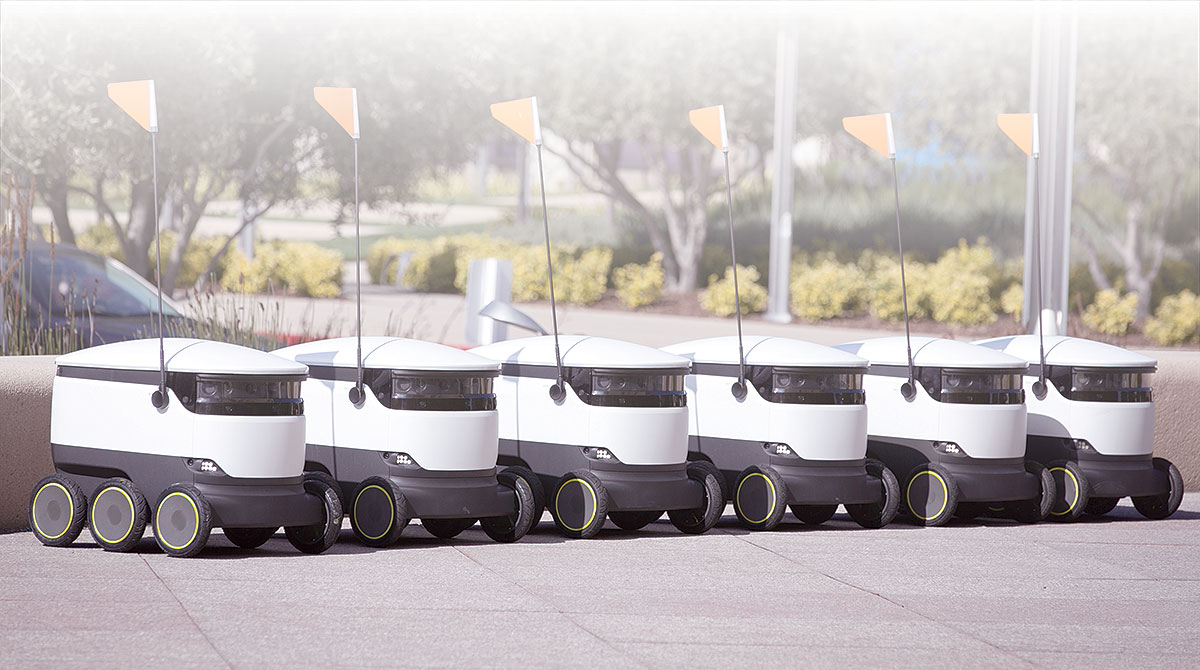 The delivery of food and small packages in urban areas has been identified as a potential application for sidewalk robots. (Starship Technologies)

Imagine if the next time you place an order for delivery from your favorite local restaurant, you’re greeted at your door not by a person but by an urban delivery robot.

It’s an odd-looking little vehicle that resembles a cooler with wheels, but with an antenna and sensors. The top of the box pops open, and you retrieve a bag with your Mongolian beef, cashew chicken and pot stickers. The top closes, and the little robot putters away on the sidewalk.

Such autonomous delivery services are fast becoming another potential disrupter in the landscape of new technologies trying to redraw the map for final-mile urban delivery.

Sidewalk delivery robots already are a reality in some cities, on college campuses and large corporate business parks. The development of these robots is led by a passel of startup companies such as Starship Technologies, Marble, Robby Technologies and Dispatch, and has big-money backing from major players including Mercedes-Benz and ­Amazon.com.

But is it innovative, disruptive technology that’s here to stay, or just a flash in the pan? And how will it affect the way today’s trucking and logistics companies operate in congested urban environments?

That depends on whom you ask. 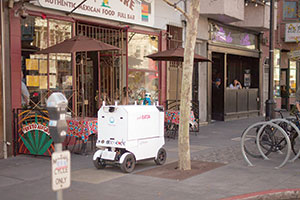 Delivery robots must be capable of navigating numerous obstacles in urban environments. (Marble)

“Our focus is on delivering essential common goods in an urban environment, whether from a local store or an e-commerce platform,” said Matt Delaney, CEO and a co-founder of Marble, a San Francisco-based startup.

Marble has built and deployed a small fleet of urban sidewalk delivery robots. It has conducted trials with firms such as Yelp Eat24 and Door Dash, delivering mostly local restaurant orders in an urban setting where the robots operate typically within a 1- to 3-mile radius.

The company last spring closed a $10 million funding round and has raised a total of $15 million, all in a quest to “reimagine last-mile logistics.”

“Traditional delivery supply chains are getting rearchitected,” Delaney said. “The model of a big truck driving around town all day dropping off packages in congested urban corridors ... doesn’t scale for small-package, e-commerce deliveries.”

Instead, Delaney envisions an emerging two-stage system of “micro hubs” combined with urban sidewalk robots. The micro hub can be a fixed location such as a store front or a warehouse, or it can be a roving hub operating out of a panel truck or step van, he said.

The smaller truck brings multiple shipments into the urban corridor and then hands them off to robots for final delivery. In this scenario, the goods could already be loaded into multiple robots, which the van or truck then delivers to a staging location. The driver then dispatches the robots, which go off on their own to make their appointed deliveries and return to a predetermined location for pickup or reloading. In theory, a driver directing a team of sidewalk robots would be able to complete more deliveries in less time.

Today, the main urban delivery options for businesses are U.S. mail, ground package delivery, courier, vehicle, bike or scooter. But the ease and ubiquity of online ordering is ratcheting up demand for speedy delivery, which is putting a strain on traditional transportation methods. For short deliveries in high-density urban areas, sidewalk robots represent an alternative that could reduce costs and improve service while also reducing inner-city truck congestion.

But not all are convinced that delivery robots will solve the growing challenges associated with urban final-mile delivery.

While the robotics technology seems solid and the initial execution in certain urban environments has been good, the potential application of this technology is limited, said Bart De Muynck, a research vice president at Gartner Inc.

“It’s all about the [return on investment],” he said. If the autonomous delivery vehicle can hold 50 orders and cover a small, dense urban area to make those final deliveries to the door, then maybe it makes sense.”

But De Munyck questioned the viability of a smaller capacity robot that might hold only one or two orders while negotiating all the challenges of a dense urban environment. “If you [have a robot] going only 3 to 6 miles per hour, how effective is that? How many deliveries can that robot do in an hour?”

He cited an anecdotal example of a pizza delivery driver who, with a personal vehicle, can make three to four stops in half an hour at a low cost to the pizza shop.

De Muynck said he believes the best opportunities for delivery robots are on college campuses and corporate business parks and offices that have large concentrations of employees and offer a more controlled operating environment.

In fact, Starship Technologies’ sidewalk robots deliver meals and other goods to employees of software firm Intuit at the company’s campus in Mountain View, Calif.

One potential application for delivery robots is to deploy them from step vans for urban deliveries. 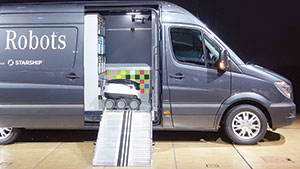 Mercedes-Benz Vans, in fact, is a lead investor in Starship Technologies, which has one of the larger deployments of sidewalk delivery robots in the United States and is expanding.

Mercedes-Benz believes the combination could hold significant potential for improving the efficiency of last-mile logistics in the future.

“The robot can only travel short distances under its own power and until now has had to return to the warehouse to be reloaded after each delivery,” Volker Mornhinweg, head of Mercedes-Benz Vans, said in a statement announcing the collaboration. “The introduction of the van as a mobile hub widens the operating radius of the robots significantly, while also rendering superfluous the cost-intensive construction and operation of decentralized warehouses. We see the combination ... as an opportunity to give our van customers access to some completely new service and business models.”

According to a Mercedes-Benz Vans spokesperson, the company completed the pilot and is analyzing the results. The next step is to begin widespread testing of the joint concept with logistics partners.

Some third-party logistics firms that already use delivery robots in the warehouse environment believe the next logical step is to apply the technology to short-route deliveries in dense urban areas.

“It makes sense,” said Rock Magnan, president of Silicon Valley-based RK Logistics Group. “There is a dearth of people willing to do the difficult work of delivering goods in congested urban areas. It’s a shortage that extends from Class A truck drivers all the way through to local couriers.”

RK uses autonomous delivery vehicles built by Fetch Robotics to move orders across a 500,000-square-foot warehouse. The robots are equipped with proximity sensors and are programmed to navigate their way around people, pallets, forklifts and a variety of other obstacles. Warehouse workers who assemble the orders no longer spend time traversing the warehouse several times a day, are more productive and enjoy a higher quality workplace experience.

Transitioning such delivery robots to an urban environment presents different challenges. The obstacles are more unstructured and random than in a warehouse. “But it’s not insurmountable given the capabilities of the technology,” Magnan said. “And there is definitely a need.” 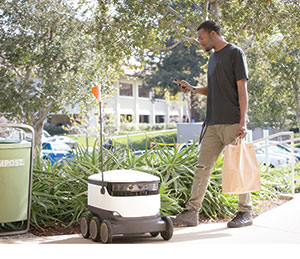 The human handler in the truck could help facilitate the deliveries by viewing each robot’s progress in real time on a map on his tablet, which also could have a chat or text feature allowing the driver to communicate directly with the customer. That handler also can intercede if there are problems or delays.

“The real challenge, whether it’s a robot or a human delivery person, is the same as it’s always been — maximizing stop density,” Magnan said. “Ideally, you don’t want to send the robot out making one delivery. You need the capability to store 10 or more shipments in the robot’s cargo bay, set up the route and monitor each delivery.”

The concept also potentially extends delivery windows since robots can operate in the evenings after people are home.

“As the driver shortage worsens and cities get more congested, there will be a need for innovation and new approaches,” Magnan said. “And as industry players and technology companies collaborate and experiment, creative ways will be found to reinvent for the better how we work today — in the warehouse and on the streets. It’s really coming up with an economic model that makes sense.”

Urban delivery robots generally operate on sidewalks, where they can encounter any number of unstructured obstacles: pedestrians, curbs, dogs, trees, baby strollers, construction detours, people on bikes and scooters, even homeless people living on the streets. 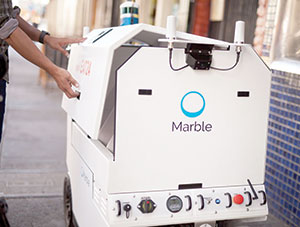 The machine intelligence, software and hardware systems required to operate autonomously in this urban setting — negotiate obstacles safely and efficiently, communicate with handlers and customers, share public spaces effectively and be as inconspicuous as possible — are complex.

And then there’s local government. While some cities have embraced urban sidewalk delivery robots, others have soured on them. San Francisco late last year passed regulations limiting the number of delivery robots that can operate, citing congestion and safety concerns, as well as the complaints of pedestrians who dislike sharing sidewalks with yet another tech entrepreneur’s idea of progress.

Marble’s Delaney and other tech visionaries, however, are undeterred. Many are convinced that the technology is advanced enough to be able to recognize and successfully navigate urban encounters, although this next level of “human and robot interaction” is requiring Marble and others — in the best tradition of Silicon Valley — to develop cutting-edge hardware and software that goes where none have been before.

“We came from Carnegie Mellon with lots of pioneering work ... in how to build these systems,” Delaney said. “Those learnings are in our DNA as a team — learning from crazy city environments and how to navigate them.” 