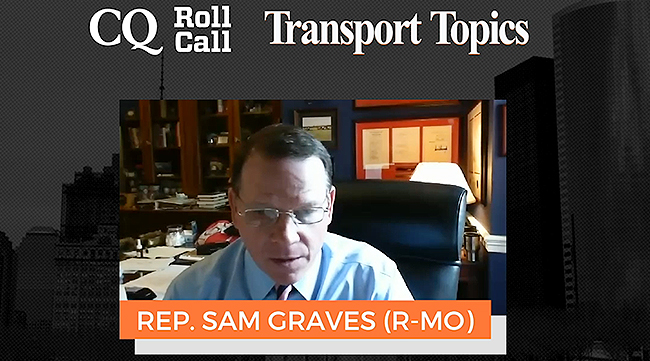 “It gives us kind of a restart,” he said of the extension of the FAST Act highway law during the Oct. 8 Future of Freight and Supply Chain Management Symposium, co-hosted by Transport Topics and CQ Roll Call. “Obviously a lot depends on what happens in the election, but it gives us some time to work on a new bill and come up with something that’s bipartisan. Nothing will pass if it isn’t a bipartisan bill, and that’s always been the tradition of the committee — right up until this one.”

Graves said the extension stretches the window of opportunity policymakers have to address longstanding concerns about the country’s transportation system, and he expressed hope that negotiations on the next bill will focus primarily on surface transportation infrastructure while streamlining permitting regulations and addressing rural infrastructure priorities.

Click to watch interviews with both Rep. Sam Graves and Sen. Ben Cardin

Graves is the ranking member on the House Transportation and Infrastructure panel.

Obviously a lot depends on what happens in the election, but it gives us some time to work on a new bill and come up with something that’s bipartisan.

Sam Graves, on the benefit of the yealong extension of the FAST Act highway law

The Highway Trust Fund’s viability also would need to be part of the measure, he said, as well as severe-weather resilience policy. Also, the adoption of technology designed to promote safety and efficiency would have a place in the new law.

“We need to be thinking about these things and what needs to be incorporated as we either build or repair or maintain the systems out there,” Graves said.

He also restated his endorsement of a vehicle-miles-traveled fee as an approach for funding surface transportation systems. He argued VMT technology is capable of immediate deployment. 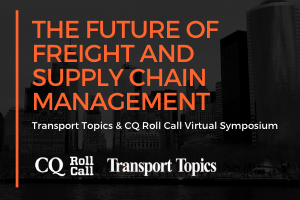 A VMT fee consists of charging motorists for their actual driving rather than relying on the fuel purchased. Graves and other proponents, including some senior Democrats, argue the VMT approach more closely resembles driving habits in the growing landscape of fuel-efficient vehicles.

This summer, House Republicans were unsuccessful in advancing most of their provisions in the Democrats’ infrastructure package. The more than $1 trillion package, which advanced the House on a party-line vote, included a reauthorization of the highway law.

Senate Republicans, in the majority in the upper chamber, did not take up the House-passed bill. The Senate also did not consider a committee-approved measure that updated highway policy. Neither chamber has advanced a long-term fix for the Highway Trust Fund, the central account for surface transportation backed via revenue from the fuel tax. The 24.4 cents-per-gallon diesel tax and 18.4 cents-per-gallon gas tax were approved in 1993.

When asked during the symposium about concerns related to the coronavirus pandemic, Graves insisted the country’s economy needs to return to normalcy.

“We need to get the country open, that’s the answer,” he said. “Open the country back up. And, get air travel moving again. It’s a vitally important part of our economy.”