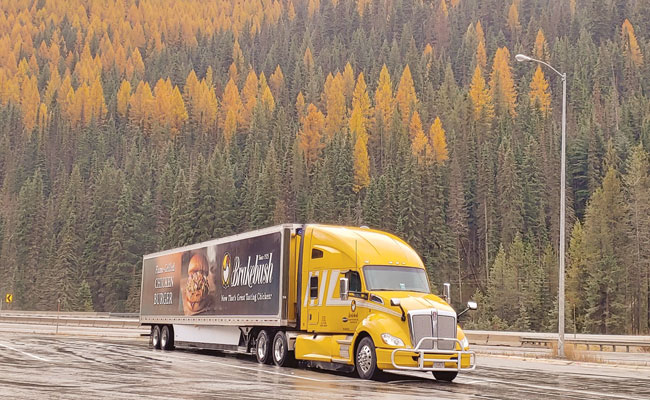 Poultry processor Brakebush Bros. was able to keep its private fleet busy during the pandemic by shifting capacity to support other food manufacturers. (Brakebush Bros.)

Private fleet operators have been riding a roller coaster since the onset of the coronavirus pandemic in March.

Amid this spike in e-commerce demand, some fleet operators found themselves dealing with a rebounding surge in freight that stretched networks and assets to the max.

The pandemic and the resulting boom in e-commerce left no corner of today’s complex transportation networks unscathed, from over-the-road full truckload moves to final-mile deliveries and everything in between. And it’s driving fundamental changes that likely will alter how supply chains are structured and private fleet operators deploy and manage assets going forward.

Panic buying in the early days of the pandemic accelerated replenishment — and pressured private fleet resources — as stores struggled to keep certain goods in stock.

Then, as e-commerce acceler­ated, so did demand for final-mile transportation as consumers increasingly ordered staples for home delivery. Meanwhile, restaurants shifted to takeout orders for on-site pickup and home delivery, further increasing the need for local delivery drivers.

“People stopped going out to the local pizza joint [and instead started] ordering online and getting deliveries,” Petty said.

As an example, he cited Papa John’s, one of the nation’s largest pizza restaurant chains, which operates more than 5,300 stores served by 11 quality control centers in the United States. The company uses its in-house transportation fleet to deliver fresh pizza dough along with sauce, pepperoni and other supplies to its locations.

As demand surged with the pandemic, the company quickly made changes to adjust. 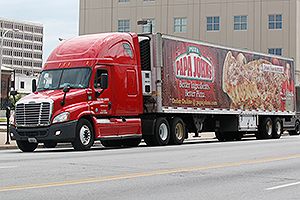 Petty also noted that early in April, at the outset of shelter-in-place orders, some NPTC members were reporting drivers ­waiting in mile-and-a-half-long lines to get to a warehouse. New protocols where drivers were ­given temperature checks, had to fill out health surveys and otherwise were kept outside of shipping docks and in their trucks also created delays. Nevertheless, as private fleets stepped up to the plate, protected their employees and persevered making critical deliveries, “their value was reaffirmed in an unprecedented moment of crisis,” Petty said.

“If you make a great product and you can’t get it to the customer, your brand is diminished,” he ­added. “Private fleets stood strong. The flexibility, reliability and abil­ity to control operations at the customer level [during the pandemic] has been eye-popping impressive for so many of the fleets.”

Brakebush Bros., one of the nation’s largest providers of processed poultry products, adjusted its private fleet operations ­quickly when the pandemic hit, said Mike Schwersenska, director of transportation and logistics.

We didn't have to cut back and were able to keep everyone busy.

Mike Schwersenska, director of transportation and logistics at Brakebush Bros.

“About 50% of our business went away in a two-week period” at the start of the pandemic in April, Schwersenska said. “Fortunately, being in cheese country, over the years we’ve also become a carrier for many other [food] manufacturers, so we could switch capacity over to assist with their freight needs. We didn’t have to cut back and were able to keep everyone busy.”

Then, as restaurants adapted to takeout and delivery, things took off, and Brakebush’s business rode the wave.

“As a company we had an all-time sales and volume record in June,” Schwersenska said. “And our transportation group had record miles traveled and record pounds delivered. It was the craziest thing we’d ever seen. Our team did a tremendous job making sure our customers had product when and where they needed it. And more importantly, they did it ­safely,” he added, noting that the fleet did not have to use the temporary hours-of-service exemption enacted during the pandemic.

Adapting to the Pandemic

Like most private fleets, Brakebush has changed its business processes considerably to keep employees safe from the coronavirus. The company regularly and carefully sanitizes trucks, including high-touch areas such as handles, doors, seats, in­terior switches and dials, and even brake line gladhands. Common areas are wiped down at least once a day, and offices are “fogged” with disinfectant once a week. Receipts for fuel and weigh stations are now paperless. 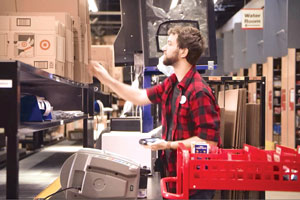 The COVID-19 outbreak has created a surge in e-commerce volumes. (Target Corp.)

Among the biggest challenges, Schwersenska said, has been the loss of personal interaction with drivers.

“I was a driver at one time in my life,” he said. “You are there all alone in the truck, by yourself, looking out the windshield. Having that interaction with the office staff, they’re like extended family. We lost some of that.”

But technology has helped to fill that void. Schwersenska uses FaceTime, Zoom and other collaborative technology tools to stay connected and communicate regularly with drivers.

“That’s made it easier to stay in touch without the physical proximity,” he said.

Brakebush operates a dedicated fleet of 75 trucks and 220 refrigerated trailers. None of the company’s driver workforce has tested positive for COVID-19, Schwersenska said.

He believes, as do many others, that the explosion of e-commerce is not a one-and-done pandemic-­driven event. It has made more and more consumers comfortable with ordering nearly anything online, and either picking it up at a storefront or having it delivered.

Ryder System is one of the nation’s largest dedicated fleet operators. 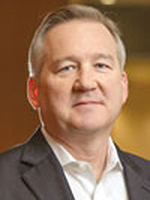 “We do a lot of private fleet conversions for those who want to de-risk or go to an outsourced model,” said Steve Martin, Ryder’s senior vice president of dedicated transportation solutions. “What we have seen through COVID has been a ­pretty strong surge in customers we support who have [increasing] e-­commerce activity either to their stores or store delivery out to the final consumer.”

Much of Ryder’s last-mile business has centered on big and bulky items, Martin said.

The company’s final-mile operations began offering “touchless delivery” by request at the doorstep but still does white-glove, in-home delivery if the customer wants it. In those instances, Ryder follows guidelines for personal protective equipment and social distancing.

With the pandemic, “we are seeing larger volumes from small package” as traditional last-mile parcel carriers have become capacity constrained, Martin said. Running more into major metro areas is an opportun­ity in which Ryder can become a “de ­facto, last-mile parcel delivery service” for its customers. 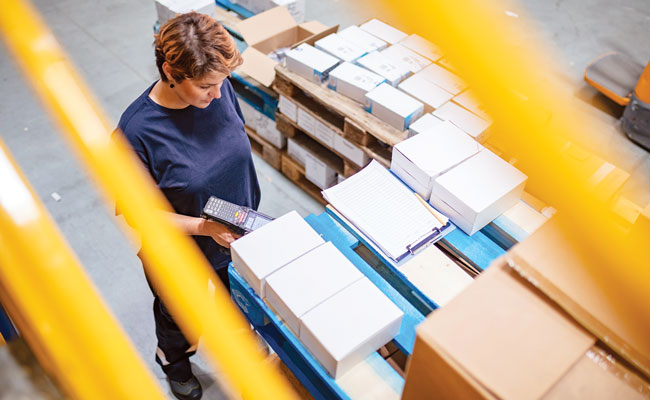 Some fleets have been implementing no-contact delivery processes to help prevent frontline workers from contracting the virus. (Consumer Brands Association)

Prior to the pandemic, Ryder had outfitted its fleet with onboard systems to meet the federal electronic logging device mandate. As part of that effort, the company also introduced Ryder­Drive, a smartphone-based app originally developed to support ELD compliance and trip ­management.

“When the pandemic hit, we were able to leverage that app to connect with drivers, gather their PPE needs in real time, as they were being dispatched, and survey them about their needs,” Martin said.

That information enabled Ryder to respond quickly and fill gaps.

“By using the driver app as a survey tool, they had a direct voice to let us know if they felt unsafe, or didn’t have enough [PPE], so we could act immediately,” he said.

The company also introduced a four-question health check on the RyderDrive app, which drivers complete prior to starting a shift. That helped identify anyone with potential symptoms or if they had been in contact with an in­fected individual. Dispatchers would then speak directly with drivers, and if deemed necessary for ­safety, put the driver into self-quarantine. Decisions were based on “what we need to do to protect employees and customers,” Martin emphasized, adding that those drivers who did go into quarantine were paid for that time.

Like many companies, Ryder scrambled early on to obtain enough personal protective equipment, such as masks, gloves and sanitation products. 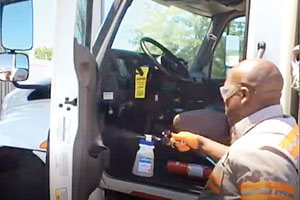 Ryder has been using fogging machines to sanitize trucks in its slip-seating operations. (Ryder System)

“We were able to secure enough right out of the gate, but some came in bulk, so we created an assembly line to break the bulk loads down and configure specific ‘kits’ that were sent out to our 400-plus locations,” he said.

At the same time, Ryder is taking additional steps to sanitize equipment.

“Where we do heavy slip-­seating, the trucks are fogged [with disinfectant] and wiped down before the next driver gets in and continues the route,” Martin said.

The pandemic also acceler­ated efforts to remove paper from workflows. Ryder utilized its ­driver app for electronic dispatch instructions and implemented paperless bills of lading and proof of deliveries for most shipments. While eliminating paper, the move to digital also had the added benefit of improving management of yard and dock density.

Martin said he believes that any new measures adopted in response to the pandemic that enhance safety or improve efficiency are here to stay.

The pandemic and the e-­commerce surge have thrown supply chains out of kilter in a variety of ways, said John Bozec, senior vice president and general manager of van truckload operations at Schneider.

“Whether it is customers starting supply chains back up, dealing with inventory displacement or resetting for contemporary sales cycles from consumers choosing to consume more via e-commerce … all these factors have required [a level of] flexibility that has not been seen before,” Bozec said.

Fleets have adjusted to dis­rupted schedules and have had to rapidly redeploy capacity — and drivers.

“If a dedicated driver was used to running the same schedule, say Tuesday to Saturday … now we’re asking them to shift to Wednesday through Sunday," Bozec said. "They may be resequenced to a different day [or facility] for a whole host of underlying reasons. That [disruption] continues to take place.”

The key to overcoming these challenges, Bozec said, has been frequent communications, sometimes multiple times per day, and ensuring that a “culture of communication” is embedded with the client.

Early visibility into forecasts and gathering as much data as the customer can provide on shifting needs have been paramount for effective planning and execution.

Bozec also cited what he characterized as an astounding display of resiliency throughout the industry as shippers and fleets have managed unprecedented supply chain disruptions caused by the pandemic and the ­e-­commerce surge.

“I don’t think any of us had an operating plan going into 2020 that would have accounted for the delays, reallocations and adjustments that have happened,” Bozec said. “The way in which we as an industry have performed has been nothing short of remarkable.”