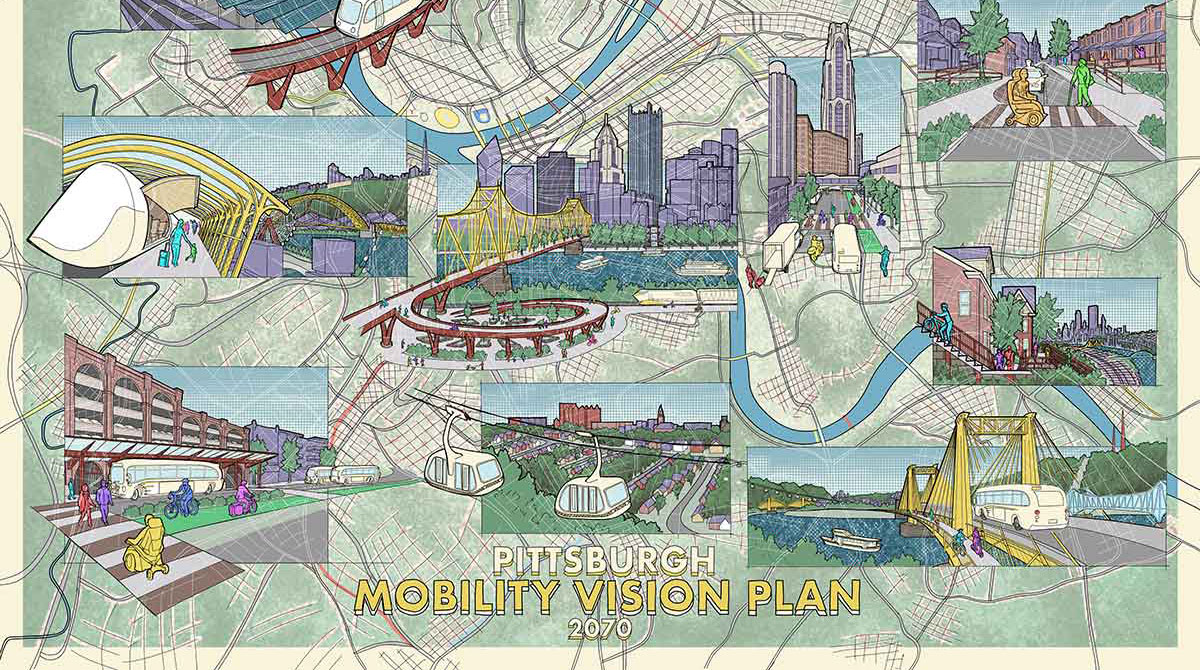 Picture Pittsburgh 50 years from now with these transportation changes: a terminal in a central location to handle a hyperloop system, vehicles for vertical takeoffs and landings, and high-speed trains; aerial trams linking neighborhoods; and new bridges crossing the Monongahela River at Hazelwood for motorized vehicles and at the former Wabash rail bridge piers for bikes and pedestrians.

Those are among the ideas the city says it must consider in a 50-year Mobility Vision Plan released Sept. 23 by Mayor Bill Peduto and Karina Ricks, director of the city’s Department of Mobility and Infrastructure.

“It may be tempting to dismiss the 2070 Mobility Vision Plan as fantastical or audacious,” Ricks said during a news conference, “but that would be a mistake. Fifty years is a long time, and a lot will change. Look back at how much has changed over the last 50.”

Our @PghDOMI has released the 2070 Mobility Vision Plan, a long range plan for the future of mobility in #Pittsburgh.

It provides a roadmap to maintain past investments, address disparities, & meet future needs.

“It is critical we have a plan to guide us.”

The plan has been under development for more than three years and is designed to dovetail with a Downtown Mobility Plan released in May by the Pittsburgh Downtown Partnership, a regional long-range plan unveiled last year by the Southwestern Pennsylvania Commission and Port Authority’s 25-year NEXTransit plan expected to be approved Sept. 24.

The city’s document “brings all of those plans together,” said Ricks, who’s leaving the city after Sept. 24 for a job with the Federal Transit Administration.

A key need in the future could be a multimodal terminal somewhere near the Golden Triangle, which could host stations for potential hyperloop, high-speed train, vertical vehicles and aerial tram systems.

The study noted the city is at one end of two possible hyperloop systems that would link Pittsburgh with Chicago, one through Columbus, Ohio, and the other via Cleveland. Hyperloop is a system that would send pods with passengers or freight through low-pressure tubes at more than 500 mph, making it possible to reach Chicago in less than an hour.

Expanding high-speed train service is a key element of the Biden infrastructure bill working its way through Congress. Pittsburgh could get improved service to New York and Washington.

Travelers in Asia already are using vehicles that land and take off vertically, and they could be coming to the U.S. in the next few years.

Using aerial trams also could be in the city’s future. Port Authority is considering such a system to move riders through a new transit corridor that would link the Strip District with the Hill District, Oakland, Hazelwood and Overbrook-Carrick. The city plan also suggests they could be located between the lower Hill and the Pennsylvanian train station and from Mount Washington to the North Shore.

The new bridge for motorized vehicles crossing the river at Hazelwood was proposed in a Southwestern Pennsylvania Commission study released in February. The bike bridge would utilize the now-vacant piers from the former Wabash rail bridge to create what the study calls a possible tourist attraction and “a pleasant alternative” to the Fort Pitt Bridge for bikers and pedestrians.

The overall goal of the plan is to ease congestion and reduce pollution by encouraging people to use transit, shared rides or bicycles rather than driving alone in a car that has to be parked somewhere. The city already has changed some planning and zoning requirements to reduce the number of required parking spaces to encourage people to use other forms of transportation.

The plan also calls for extensive improvements in city sidewalks, expansion of bicycle lanes and installation of charging stations for electric vehicles throughout the city.

Ricks said the plan will be a “living document” designed to adapt to changes in technology and community needs over the coming years.