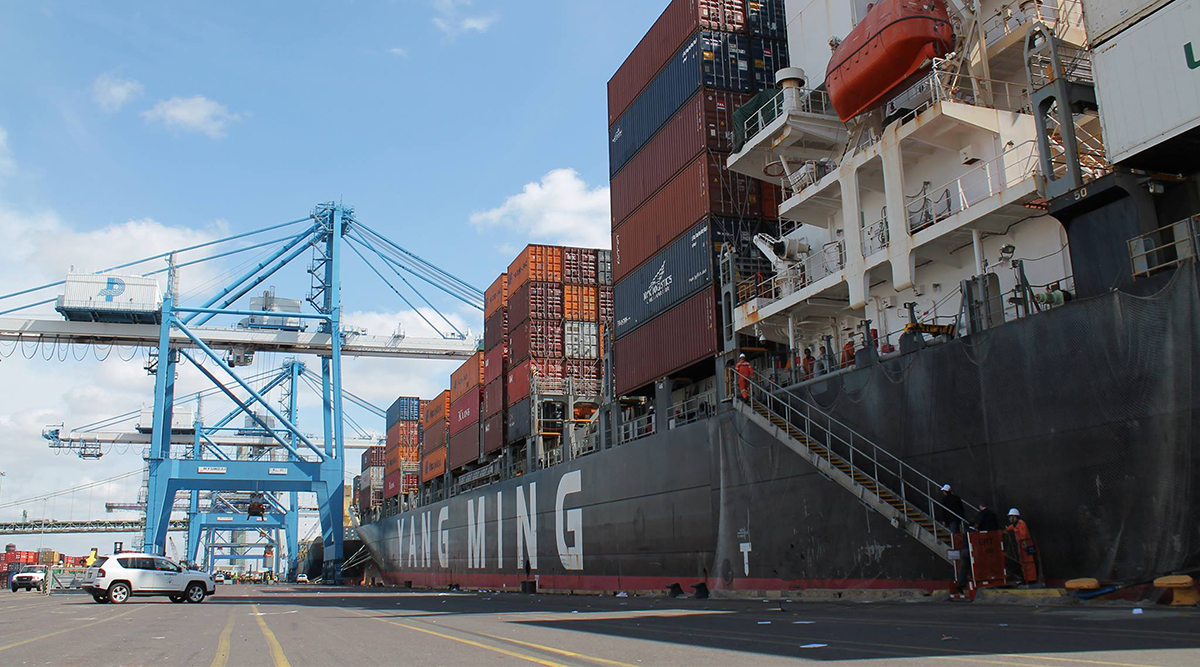 Work will wrap up soon to strengthen ship berths at the Packer Avenue Marine Terminal. The design of new warehouses at the former Philadelphia Produce and Seafood Terminal will be completed and go out to bid. Ground will be broken on a 100,000-square-foot warehouse at the Tioga Marine Terminal in Port Richmond. Building a vehicle-processing center for Hyundai and Kia imports is also expected to begin at the Southport terminal at the Navy Yard.

“Construction of the warehousing improvements will all be done in 2018, a really significant growth expansion process,” said Gregory Iannarelli, senior director of business development and chief counsel for the port, known as PhilaPort.

Sounds like a busy 2018. It follows on the heels of a bang-up 2017 at the port, which saw more containerized freight, more cars, more cargoes such as wood pulp, and the promise of those larger cranes, capable of unloading larger ships.

The first two cranes, as big as any in New York Harbor, are on their way from Shanghai, China. Port officials recently announced the $23.5 million purchase of two additional New Panamax-size container gantry cranes, which will arrive in April 2019 and enable Philadelphia to double container cargo volumes and create jobs.

The changes came after Pennsylvania Gov. Tom Wolf pledged $300 million, the first major capital investment in four decades for terminal improvements, wharves, warehouses, and cranes. The state is landlord and owner of 16 piers and terminals on the Delaware River.

PhilaPort, which leases and manages the piers and terminals, spent $10 million in June to buy the former Produce and Seafood Terminal from Philadelphia Industrial Development Corp. The 29-acre parcel at Third Street and Pattison Avenue will be used to relocate warehouses and increase container capacity at Packer Avenue.

All these improvements at the port are expected to create up to 2,000 waterfront jobs, and nearly 7,000 total jobs for truckers, rail workers, suppliers, and port-related businesses over the next decade.

“Right now, we can’t build fast enough,” said port CEO Jeff Theobald. “We have to get through this construction as quickly as possible to get those jobs going. And then move on to Phase Two. Clearly, we need more warehouse space. We’re trying to look at properties available.”

Holt Logistics, which operates the Packer terminal for PhilaPort, has shifted empty containers, chassis, and other equipment from the main yard to a 45-acre lot next door, increasing space at the dock. Containerized cargoes are up about 20% over last year, said Eric Holt, vice president of sales and marketing.

“The goal right now is to free up as much terminal operating area as possible, because the number of containers has grown to the point where, if we don’t, we’re going to become congested,” Holt said.

For 2017, the port is on track to reach a record in containers handled in one year.

“All forecasts are indicating another exceptional year,” Iannarelli said. “We have topped a half-million containers, which is the first time ever.” Last year, the port handled 459,000 TEUs (20-foot-equivalent units, the standard size of international containers). “This year, we are going to handle roughly 540,000. That’s pretty good growth.”

By another measure, the port expects 6.8 million metric tons of cargo in 2017, up from 6.2 million last year. “We exceeded all of 2016’s cargo by the end of November,” Iannarelli said. The goal is to position Philadelphia to attract shippers that currently go to rival ports in New York and Baltimore.

Instead of retrofitting an existing terminal at Tioga, port officials shifted gears and decided to add 100,000 square feet of “food grade” warehouse space for wood-pulp shipments. Fibria Celulose, the world’s largest producer of eucalyptus pulp, sends 400,000 tons of pulp from Brazil to Tioga annually. A second pulp customer, CMPC Celulosa, also ships to Tioga, and now other wood-pulp producers want to come, too.

“We have a lot of interest from not only expanded Fibria volumes, but also from other customers,” said Robert Palaima, president of Delaware River Stevedores, the terminal operator at Tioga. “This new warehouse will give us a lot more flexibility to really become a premier forest products distribution center in the Northeast.”

With the 103-mile deepening of the Delaware River navigation channel to 45 feet from 40 feet, begun in 2010, nearly completed, bigger ships are coming to Philadelphia through the expanded Panama Canal.

Next month, the largest ship ever to sail up the Delaware — a vessel 11,000 TEUs operated by Mediterranean Shipping Co. — is scheduled to bring cargo from Chile and Peru, port officials said.

More than 154,000 new Hyundai and Kia vehicles arrived at the port from South Korea as of Nov. 30, headed to dealer showrooms. The state will invest $93 million at the Southport site to build a new processing center and provide additional acreage for autos.

In January, a twice-monthly shipping service will take used-car exports from Philadelphia to Tema, Ghana; Cotonou, Benin; and Lagos, Nigeria, Iannarelli said. The first ship, MV Glovis Cosmos, is due to load cars on Jan. 10.

Looking to the future, the port’s chief executive wants to develop a ship berth on 30 to 40 acres and 2,000 feet of waterfront at the eastern end of the Navy Yard. It would be welcome news to the International Longshoremen’s Association and others, who have long wanted a marine terminal at Southport.

In November 2016, the port suspended the bid process for the 195 acres known as Southport. Although six groups initially expressed interest in developing the property, five dropped out. The port required that any developer of the 119 waterfront acres had to build a wharf and two ship berths, making the project expensive — about $500 million.

At that time, the state was looking predominantly for private money.

“I want to have a group seriously look at how we would start developing that additional berthing capability at Southport,” Theobald said recently. “We have a permit already for Southport, adding a berth there. We have the ability to do it, and I don’t want to lose the permitting right.”

Who would finance such a project?

“That’s a tough one, because it’s a lot of money,” he said. “But I think that’s the next step to expand the berth capabilities” between Packer and Southport “just south of Pier 124. It’s about 30 or 40 acres of land that we could use and about 2,000 feet of berth. We’ll probably be dusting off our studies to see what that would cost, and how would we finance it, and who would be interested. We’ll probably go down that path again.

“It’s a challenge, but I think there may be a way to put that deal together again,” Theobald said. “It’s good for the port. It’s good for jobs. That’s the only piece of berth that we actually have available to grow. We’ll have to to try to work our way to make that happen.”