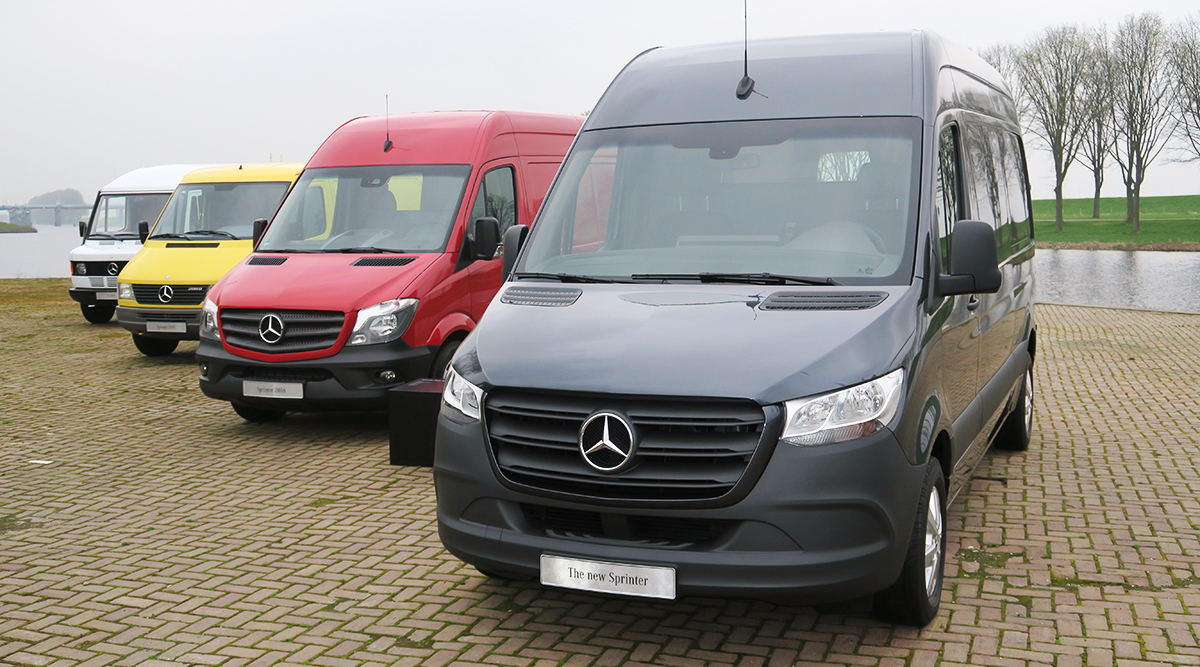 The new Sprinter on display next to its predecessors: the previous two Sprinter generations launched in 2006 and 1995 and the TN introduced in 1977. (Seth Clevenger/Transport Topics)

AMSTERDAM — The updated Mercedes-Benz Sprinter van will offer a multitude of new options and features when it hits the market later this year, but the most significant additions could be its new connected-vehicle services.

The third generation of Mercedes-Benz’s flagship commercial van will be available with an array of digital tools to assist drivers and help fleets better manage their operations, highlighted by the Mercedes Pro telematics platform and a new touchscreen multimedia display with voice command named the Mercedes-Benz User Experience, or MBUX.

Members of the trade press experimented with those systems firsthand during an April 12 test drive that weaved a course through the Netherlands, from Amsterdam to Leiden to Rotterdam and back.

The U.S. launch for the new Sprinter is targeted for the end of this year. 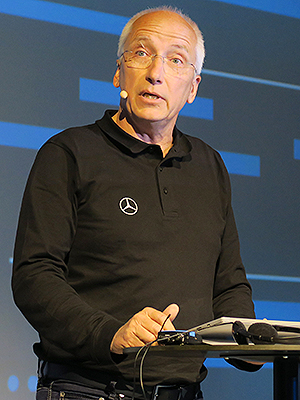 “This new business environment has more complex supply chains and shorter delivery times, and efficiency is more important than ever,” said Norbert Kunz, head of product management at Mercedes-Benz Vans.

By better utilizing vehicle data, operators will be in a better position to respond to modern transportation challenges, he said.

“Day-to-day tasks have to be completed more efficiently to handle the increasing workload. Vans are used mainly in and around the cities, and traffic is getting heavier and heavier every day,” Kunz said.

From their offices, fleet managers can use Mercedes Pro to check the location of each vehicle in the fleet, track fuel-consumption trends and even review digital records of each individual trip, including details such as miles traveled, fuel usage and safety-related events such as harsh braking incidents.

Fleets also can use Mercedes Pro’s geofencing capabilities to receive notifications when a vehicle enters a predefined area, and can remotely check basic vehicle information such as the fuel gauge, whether the engine is on and if the doors are locked. 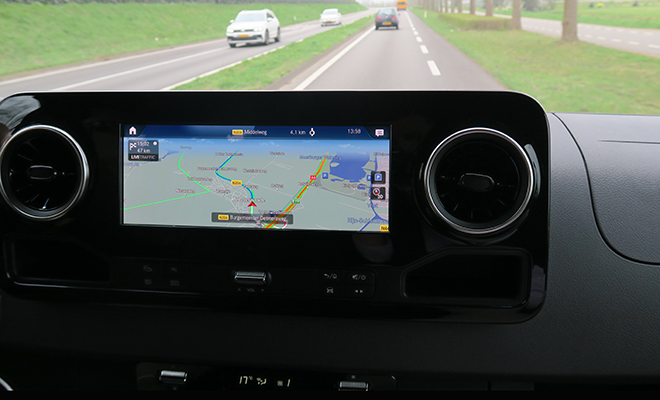 Drivers can use the Mercedes Pro mobile app to check much of this same information while away from the vehicle, or to receive updated information or revised routes from the back office.

While some of these services will be free, others will require a monthly subscription fee, with pricing yet to be announced.

The new Sprinter impresses with several features – one is MBUX, a fully integrated connectivity solution with voice control. check it out in our Snapshots by Mercedes-Benz Vans!

The intuitive navigation software was the standout feature during the test drive. The system provided turn-by-turn voice directions and displayed a large route map with live traffic information, as well as the posted speed limit, all easily viewed at a glance.

However, there was a learning curve associated with using this voice-command feature, which sometimes misinterpreted commands or was activated unintentionally by unrelated conversations during the test drive.

But while the driver is learning how to utilize the voice-command system properly, the system itself is learning at the same time through artificial intelligence.

A prompt to “call my boss” leads to a question about which person in the phone directory is the driver’s boss. MBUX then saves that relationship for the next time the driver makes the same request.

The digital assistant also can offer suggestions if the driver doesn’t have a specific address for the next destination. Saying “I am hungry,” for example, prompts the system to suggest nearby restaurants and show online reviews.

Meanwhile, the van’s adaptive cruise control feature helped relieve the stress of driving in heavy traffic during rush hour on the final leg of the test drive. The vehicle also has an active lane-keeping assist feature.

In the United States and Canada, the new Sprinter will be available with three engine options: a 4- or 6-cylinder diesel engine or a 4-cylinder gasoline engine. The diesels will be paired with a 7-speed automatic transmission, while the gas engine will be mated with a 9-speed automatic. U.S. and Canadian customers will be able to order the van with rear-wheel or all-wheel drive.

Mercedes-Benz also is bringing battery-electric versions of its commercial vans to Europe, starting with the eVito this year and the eSprinter in 2019.

The company has not decided whether to bring an electric-powered Sprinter to North America, but if it does, there likely will be changes from the European version, which is based on a front-wheel drive configuration that the company doesn’t plan to offer in this market.

Company officials said an electric Sprinter for the U.S. market also would require, at minimum, a range of 100 miles on a single charge, but a 200-mile range would be optimum.