This story appears in the Aug. 22 print edition of Transport Topics.

The Obama administration unveiled its long-anticipated Phase 2 rule on greenhouse-gas emissions from heavy- and medium-duty trucks, pushing the industry to make tractors and trailers that are more aerodynamic and fuel-efficient, yet still safe and durable.

The final rule announced Aug. 16 by the Environmental Protection Agency and the National Highway Traffic Safety Administration is built on a proposed version issued in June 2015. While trucks and their engines have long been regulated on their emissions — especially Phase 1 on greenhouse gases, now in force — this rule marks the first time trailer makers will face federal mandates on aerodynamics and low-rolling- resistance tires. (Related story.) 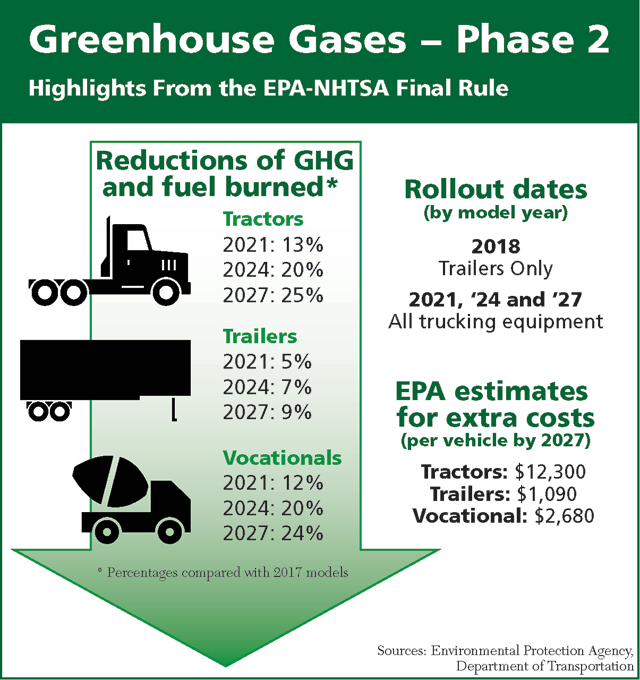 When fully implemented in 2027, the rule seeks reductions in CO2 output and fuel use of 25% by highway tractors, including engine improvements, and 24% by vocational vehicles — compared with 2017 vehicles.

“These standards are ambitious and achievable, and they’ll help ensure the American trucking industry continues to drive our economy — and at the same time protect our planet,” EPA Administrator Gina McCarthy said during a press briefing where she was joined by Transportation Secretary Anthony Foxx.

The vehicle efficiency is forecast to save 1.1 billion metric tons of CO2 emissions, 2 billion barrels of crude oil and $170 billion worth of fuel over the lifetime of the vehicles built under the provisions of Phase 2.

“We expect these will drive innovation as well as protect the air that we breathe,” McCarthy said of the new rule’s provisions.

Joining Foxx and McCarthy for the conference call briefing was Mary Nichols, chairwoman of the California Air Resources Board. CARB endorsed the new rule, meaning that truck and trailer makers will be able to manufacture to hit a single, nationwide standard.

Equipment manufacturers had been concerned that CARB might enact a supplementary standard on top of the federal rule.

Phase 1 and Phase 2 are part of the Obama administration’s effort to reduce greenhouse-gas emissions, which are seen as contributing to global climate change.

“DTNA is pleased that the EPA and NHTSA chose a nondisruptive implementation of the standard, thereby allowing the industry over a decade to phase in technical changes,” the nation’s largest heavy-duty truck maker said.

“This ensures that no unrealistic cost of acquisition pressure will be placed on our valued customers and, in the end, will avoid unnecessary burden on the cost of transportation, which is essential for the prosperity and competitiveness of the economy,” according to the DTNA statement.

“We are pleased that the rule builds on the Phase 1 regulatory framework that recognizes the diversity and complexity of the commercial vehicle sector,” said Srikanth Padmanabhan, president of the company’s engine business.

American Trucking Associations President Chris Spear said the federation has “worked closely with both the Environmental Protection Agency and the National Highway Traffic Safety Administration over the past 3½ years to ensure these fuel-efficiency and greenhouse-gas standards took into account the wide diversity of equipment and operations across the trucking sector.”

ATA energy and environmental counsel Glen Kedzie added that lab tests and computer simulations are not as important as highway experience.

“While the potential for real cost savings and environmental benefits under this rule are there, fleets will ultimately determine the success or failure of this rule based on their comfort level purchasing these new technologies.”

Owner-Operator Independent Drivers Association spokeswoman Norita Taylor said her group’s members worry the rule is “forcing a standard, which can lead to problems with reliability and maintenance [and] ultimately has no benefits to the environment if no one wants to buy the product. We recommend allowing OEMs to innovate on a more common-sense timetable that benefits the industry and the environment.”

Two days before the release of the rule, Kevin Baney, chief engineer of Kenworth Truck Co., said he did not anticipate any surprises, as there has been “a lot of industry input” considered in crafting the final rule.

“The biggest challenges are the levels we have to achieve, but they are the same for everybody and will drive a lot of good change,” Baney said.

“Improved fuel economy is a goal all stakeholders can unite around. The new targets represent a real challenge for our industry, and we are focused on meeting these very ambitious goals,” he said.

Analyst Michael Baudendistel told clients of Stifel, Nicolaus & Co. that the rule is not a great danger for manufacturers. Truck and component OEMs should be prepared to meet the standards largely through technology currently available, he said.

“We continue to believe Phase 2 will have less impact on the industry than Phase 1,” Baudendistel said.