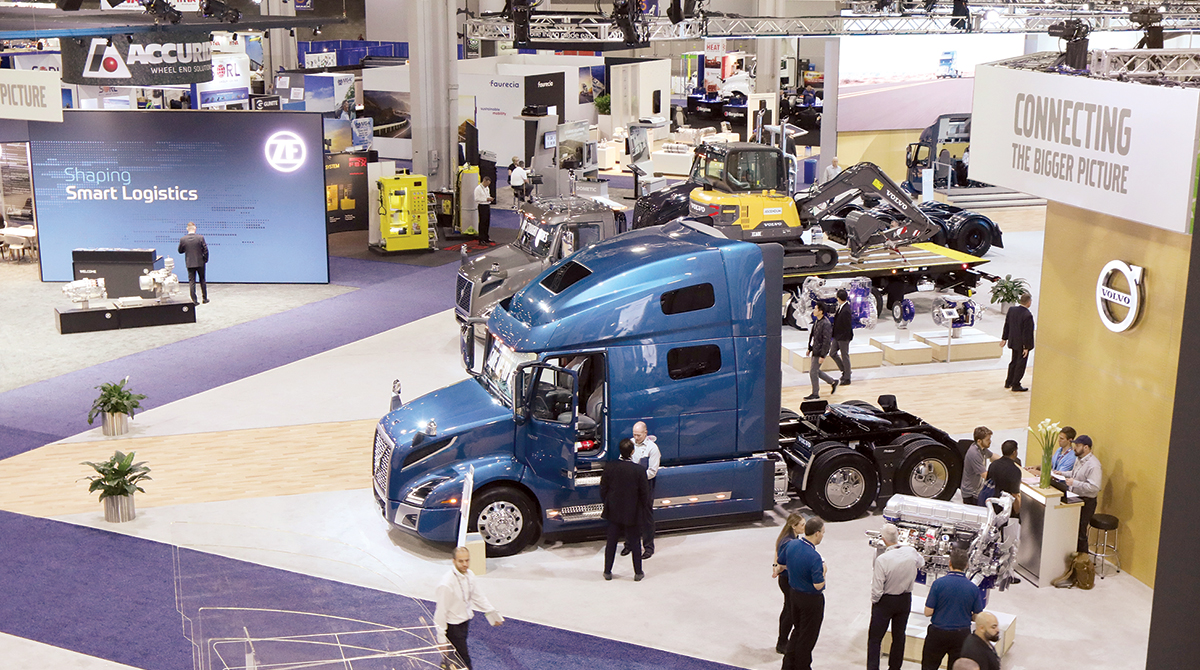 ATLANTA — Truck, trailer and component manufacturers unveiled their latest innovations and outlined visions for the industry’s future here at the second edition of the North American Commercial Vehicle Show, while simultaneously preparing for an expected downturn in the equipment market next year.

Casting their gaze toward the future, truck makers and major suppliers continued to showcase their investments in battery-electric trucks, but a growing number also presented another zero-emission technology — hydrogen fuel cells — as an intriguing future option for trucking.

The show floor also featured a hydrogen fuel cell truck developed by Nikola Motor Co., and Kenworth Truck Co. discussed its partnership with Toyota to develop fuel cell trucks of its own.

Bosch, which is supporting Nikola’s efforts to produce heavy-duty fuel cell trucks, highlighted its investments in the technology.

“Last NACV, there weren’t too many people that were talking about this, but that small band of believers has turned into a large band of implementers,” said Jason Roycht, vice president for commercial vehicles at Bosch North America.

Navistar, meanwhile, unveiled a battery-electric model — the medium-duty International eMV Series — and announced the formation of a new business unit to support electrification.

Daimler Trucks North America and Peterbilt Motors Co., meanwhile, had their own lineups of electric trucks on display.

And Volvo Trucks and Mack Trucks both highlighted for the media their plans to deploy battery-electric models.

The transportation industry’s trend toward big data and connectivity also was on full display at NACV.

Great Dane Trailers, for one, introduced a telematics platform that remotely tracks the condition of the trailer’s components.

The focus on next-generation technology came against a backdrop of caution from original equipment manufacturers, who expect the commercial vehicle market to return to normal business levels after historically high new-truck sales in 2018 and 2019.

During an Oct. 28 media briefing, Randall noted that while Mack has raised its projection for total North American Class 8 truck sales to 340,000 vehicles in 2019, up from previous guidance of 325,000, the company forecasts an overall market of 240,000 for next year.

That forecast mirrors the outlook from Volvo Trucks North America — both manufacturers are owned by Volvo Group — but VTNA president Peter Voorhoeve sees no cause for alarm. 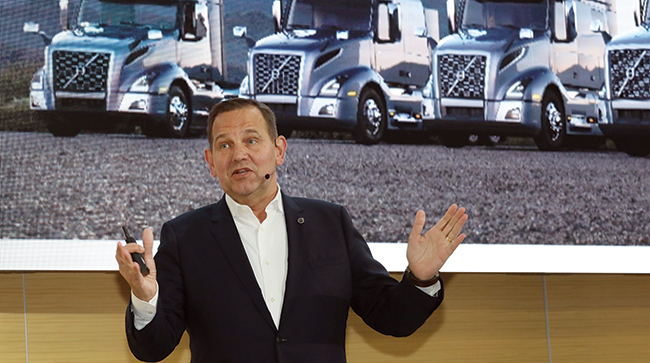 Voorhoeve speaks about the market at NACV. (John Sommers II for Transport Topics)

“Is that reason to panic? No. In our opinion, no,” he said during an Oct. 28 presentation. “The market is correcting to a significantly normal level.”

Within that normalized market will be vocational demand from an area of interest to many trucking fleets, Randall said.

“We still see a lot of good infrastructure things happening across the country,” he said. “While there may be nothing from the federal government, the states are still spending their money.”

And while insecurity about global trade may take a toll, Voorhoeve believes consumer sentiment remains strong.

“Brexit is not really helping; we have some trade tensions that put some insecurity in the world,” he said. “But at the same time, I think we see still a fairly good consumer spending. We see fairly good consumer confidence. And at the end of the day, that all supports our business.” 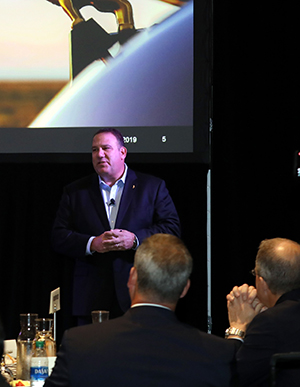 Measured optimism is compelling some suppliers to invest in manufacturing capacity for the future. Hendrickson, for one, broke ground in April on a 180,000-square-foot facility in Ohio to produce trailer suspensions. During an Oct. 28 presentation, CEO Gary Gerstenslager noted that with long-term outlooks remaining positive for freight, it’s important for companies to be ready when things eventually ramp back up.

“If you want to maintain the market share you have, you have to build that facility. And that’s the long-term view we have,” he said.

Attendance figures for NACV were not available at press time, but the show featured more than 470 exhibitors, up slightly from the 439 that participated in the inaugural event in 2017 at the same venue, organizers said. About 6,000 attendees visited NACV two years ago.