But Data Management Is Essential to Success 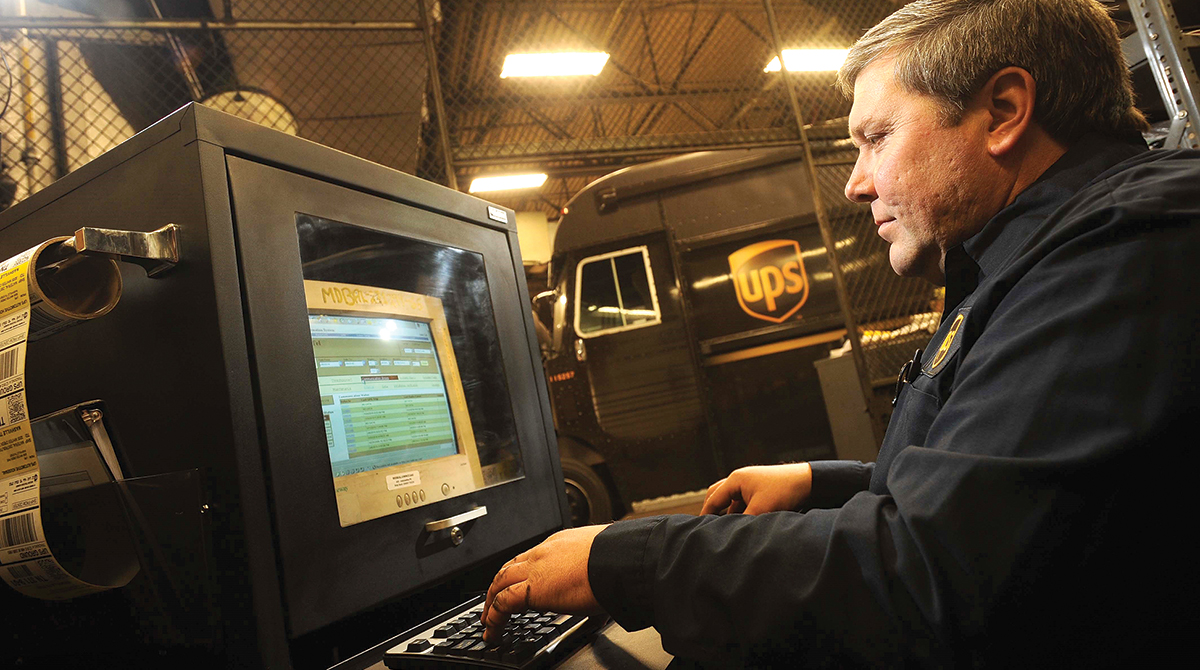 A growing number of motor carriers are taking advantage of remote diagnostics to streamline vehicle maintenance and reduce downtime, but fleets must know how to filter through the data to use this information effectively.

Remote diagnostics services, which are available through all major truck manufacturers and various component and technology suppliers, enable fleet managers to monitor engine fault codes and maintenance issues while the truck is on the road.

Ralph Gallagher, an automotive engineer and manager at UPS Inc., credited the technology with reducing his company’s vehicle failure rate from one per 400 days of service to one per 1,000 days. The data has helped the automotive management team prioritize maintenance activities and flag problems for immediate repairs. The detailed failure feedback has enabled build-specification improvements for components such as turbochargers, coolant tanks and radiator pressure caps.

Open the spigot slowly. If the floodgates are opened too quickly, the natural human response is ignore everything and go back to ‘how we have always done it.’

UPS, which ranks No.1 on the Transport Topics Top 100 list of the largest for-hire carriers in North America, began using remote diagnostics earlier than many other fleets. It began beta testing the technology in Class 6 vehicles in 2004 and incorporated it in all new builds in 2007. By 2012, the company had completely integrated remote diagnostics in about 80,000 vehicles.

From his screen, Harris can view all of his trucks’ locations across the country. Vehicles with active fault codes are represented by red triangles. Harris can see where the vehicle is located in relation to a maintenance shop, notify the manager that it’s coming and inform the driver.

The system also shows how many times a fault has occurred on a piece of equipment. For instance, if a truck is on the road with a faulty headlight, Harris can contact the driver in real time, thus preventing a safety violation. 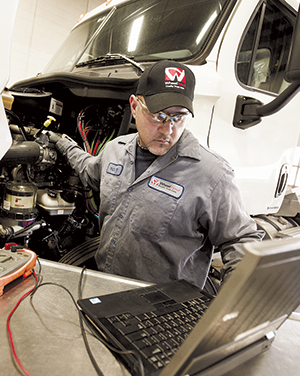 He also noted that the carrier can see a repair order and what was done to correct an issue. A couple of times, a technician has simply cleared the fault without determining what was wrong. That ability to check up on the work serves as an administrative and training tool. It also allows the fleet to see if a code reappears soon after the vehicle has left the shop, allowing it to file a rebuttal on the bill.

Robert Braswell, executive director of the American Trucking Associations’ Technology & Maintenance Council, said remote diagnostics became a topic of conversation at TMC in the early-to-mid-2000s, but interest has reached a new level the last couple of years. Today’s networks can deliver information faster and cheaper. Because of emissions and integrated powertrains, vehicles are being equipped with instruments to transmit information to the back office.

Altec manufactures, sells and supports aerial devices, digger derricks, cranes and other products. It also has a rental fleet and a fleet of service vehicles.

Braswell said only a small percentage of carriers are using remote diagnostics, with larger fleets involved in TMC more likely to see its value. For smaller fleets, the subscription model is a turnoff. Truck manufacturers offer the service free at first and later begin charging a fee. Use will increase as more companies purchase new trucks equipped with the technology, he said. Second and third owners later will subscribe.

The U.S. Postal Service also is completing a pilot program to test the technology’s usefulness. Spokeswoman Kim Frum said USPS is evaluating the data to determine if it will improve fleet management.

Making sense of the data collected by a vehicle can be challenging.

UPS’ Gallagher said the company ensures it doesn’t become overwhelmed by vigilantly comparing its maintenance practices against road calls with an emphasis on the data it might have missed.

Altec’s Calhoun cautioned that fleets should not overwhelm their staff members with too much information too soon.

“Open the spigot slowly,” he said. “If the floodgates are opened too quickly, the natural human response is ignore everything and go back to ‘how we have always done it.’ ”

USA Truck’s Harris said fleets should filter their systems to display only the most important information.

“In our world, there’s so much data coming across,” he said. “I want to see critical faults that are coming up on equipment — something that’s going to really hinder the operation of that piece of equipment.”

Penske Truck Leasing has been using telematics for years. In 2015, the fleet built a platform allowing it to aggregate data from across its systems. One of the first uses of that data was to remotely diagnose vehicles, said Bill Combs, vice president of connected vehicle strategy and experimentation. 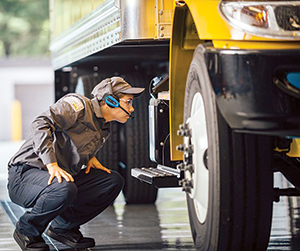 Because Penske runs trucks from multiple manufacturers, it built its own remote diagnostic capabilities and user-facing functionality into its systems.

Penske has developed scenarios that identify vehicles at risk of a breakdown and then coordinates repairs at a convenient time for fleet customers, said Joe Mlachak, director of vehicle diagnostic applications. Based on the code’s severity, it can schedule the driver to visit a nearby repair facility or wait until they return home.

“It has had a very positive impact on our cost, but more importantly it has helped our customers’ over-the-road experience when a light comes on in the dash or an issue arises,” Mlachak said.

UPS’ Gallagher said the future will bring machine-learning capabilities that can analyze fleet compositions, assess failure rates more accurately and shift the focus from scheduled to predictive maintenance. Thus, the sensors will alert fleets to a looming problem before the part fails.

However, Harris is skeptical of that concept. USA Truck’s fleet has an average age of 2.5 years, with most vehicles under warranty. Harris said truck manufacturers will be reluctant to replace a component before it fails, and the data doesn’t show when that might happen.

Altec’s Calhoun looks forward to when integrated vehicle health management, or IVHM, becomes more common. IVHM allows the vehicle’s programming to see when the system is degrading and adjusts its operating capabilities to protect the equipment or extend its life.

Braswell said condition-based maintenance capabilities will let the vehicle itself provide its health status. He sees more standardization occurring in how information is reported between manufacturers and suppliers. Organizations such as TMC and SAE International will lead that change.

Colby Shaw, corporate service director for Kenworth Sales Co., said fleet customers are more commonly using the service. Through Paccar Solutions, Kenworth Sales can obtain a satellite view of a truck’s location and pull the codes. Shaw said prior to the more widespread adoption of remote diagnostics, customers would call saying a truck was parked beside the road with a red check-engine light, or it had been de-rated or shut down. The only options were to send a hook or a mobile repair truck. Now, the dealership’s technicians can look up the VIN, determine the location, see the problem and decide what to do. 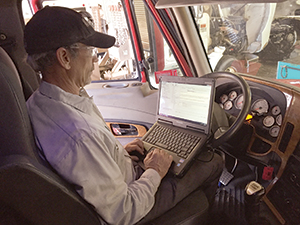 Shaw said fleet customers are becoming more aware that the service is available through a dealer, but only time will lead to greater acceptance.

Victor Cummings, vice president of service operations at Rush Enterprises, said the larger the fleet, the more likely it uses remote diagnostics. More carriers are embracing the technology as it becomes more user-friendly.

Greg Arscott, president of the Southeast division of The Pete Store, said the Peterbilt dealer can ensure that parts and technicians are ready. An integrated service management system shows the truck has been checked in, diagnosed and fixed. Problems can be managed in real time.

“In the olden days … we might be the last person to know that a truck was down on the other side of the country, or maybe we’d only know when there was an issue, as in it was taking too long or the fleet felt like they weren’t getting the service they needed,” he said.

“We’re in a position where we can actually tell a customer that they’ve got a truck down,” he added, “or the truck might be going down because we know there’s a potential problem and can help manage that repair right from the outset.”

Arscott noted that adoption varies by fleet application. Regional and local fleets don’t see the same value in remote diagnostics because they see their trucks every night. Adoption tends to increase as a fleet grows and as it covers more ground. Most fleets have the technology available, but the percentage of customers that use it to manage their business is in the 50% range. Five years ago, it was an emerging technology and almost a novelty.

Arscott said one tipping point is having enough of the fleet connected. When fleets reach 75%-80% connectivity as part of their natural buying cycle, they reach a critical mass.

He believes over-the-air software updates will drive further adoption. A small fleet may not see the value of remote diagnostics, but updating without having to park and wait can benefit all carriers. Meanwhile, the dealership can focus on trucks that really need attention.

“It really drives value for fleets beyond, ‘Where is my truck and is there anything wrong with it?’ ” he said.