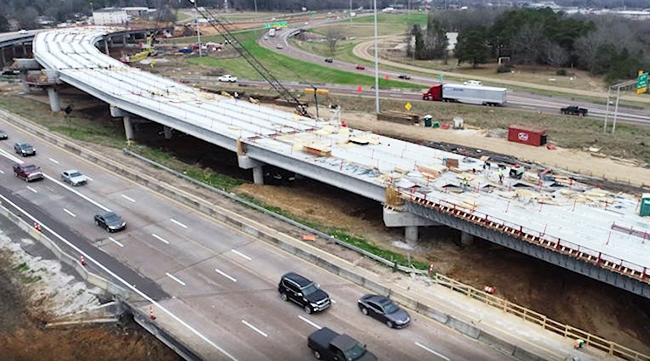 Mississippi Department of Transportation crews are pressing on with work to replace a bridge carrying Interstate 20 through the state capital.

Running across central Mississippi, I-20 is the state’s primary east-west route. Specifically, the project’s focus is the I-20 bridge between Terry Road and Gallatin Street in Jackson. The interstate passes between those roads for fewer than two miles in a highway configuration that includes I-55 as well as U.S. Route 49 and Route 51.

MDOT spokesman Michael Flood confirmed the project remains on track despite disruptions caused by the winter weather that gripped Mississippi in mid-February. The weather event, which brought ice and freezing temperatures to the area, hampered crews’ ability to work and receive deliveries, Flood said. As of Feb. 19, the city of Jackson was contending with 13 water main breaks and a “boil water” notice remained in effect.

“Crews anticipate pouring the bridge deck in the coming weeks as weather allows,” Flood told Transport Topics. “Overall, the project is on track to be completed as scheduled, [in] summer 2022.”

The $42.2 million project is a major undertaking for MDOT. The replacement bridge is being constructed on a new alignment to keep traffic closures at a minimum.

According to MDOT, crews have completed the substructure of the new bridge. The substructure distributes the load to the bridge footings. Workers also recently installed metal bridge deck forms, which are meant to hold the concrete in place. Other ongoing work includes slope stabilization efforts and drainage structure installation.

December marked a milestone for the project as crews put in place the largest prestressed span in MDOT history. The concrete beams weighed about 200,000 pounds each and are approximately 170 feet long, according to MDOT.

“This project is a major investment into Mississippi’s transportation infrastructure,” said Willie Simmons, commissioner for the Mississippi Transportation Commission’s central district. “Once complete, the new bridge will improve travel conditions along the I-20 corridor.”

Isaac Howard, an engineering professor at Mississippi State University, identified the I-20 bridge as a vital corridor for travel. Howard, who also serves as director of the university’s Construction Materials Research Center, said interstates 20 and 55 are key arteries for Mississippi travelers and traffic moving across the south.

“[The I-20 bridge in Jackson] means everything for traffic moving through that area,” Howard told TT. “It would disrupt freight, traffic [and] commerce for all of central Mississippi if there was no bridge. If there’s no bridge, there’s no highway.”

Simmons advised drivers to limit distractions and operate their vehicles slowly when traveling through the work zone. He said drivers should be on “high alert” for roadside crews for the remainder of the project.

Howard said that some traffic congestion is inevitable when a full bridge replacement is underway in a busy corridor.

“It puts a perspective on waiting five minutes while someone’s family is out there actually working on the bridge,” Howard said. “You really want them to take their time and do it the right way. It wasn’t magic that brought you the food that you ate. It was a road or a rail line or a port or a truck.”