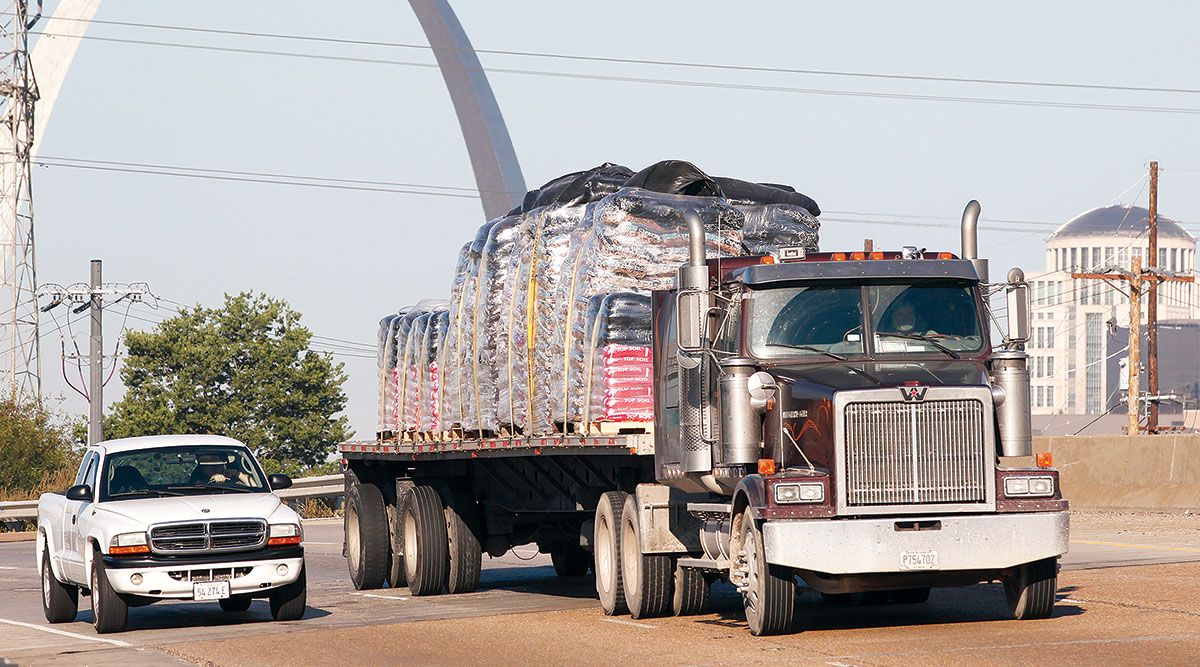 Truck tonnage rose 4.8% in May compared with one year ago, the largest year-over-year gain since November 2016, according to the monthly American Trucking Associations index, suggesting that the freight market has tightened in recent weeks.

“After three straight declines totaling 2.6%, truck tonnage snapped back in May,” said ATA Chief Economist Bob Costello. “One month does not make a trend, but the nice gain last month fits more with the anecdotal reports I’ve been hearing from fleets, at least more so than three straight months of decreases.”

The not seasonally adjusted index, which represents the change in tonnage actually hauled by the fleets, was 145.3 in May, which was 8.5% higher than the April level.

The FTR Trucking Conditions Index was 7.03 in May, unchanged from April but significantly better than the 1.7 reading one year ago. The index takes into account fuel prices, rates, demand and truck utilization. Anything above zero is a positive environment. Double-digit figures indicate an extremely robust or depressed market. Like the ATA Tonnage Index, the FTR index is weighed toward contract freight over spot markets.

“Conditions still seem to be fairly stable and just a little bit more positive. May 2016 was a low point in our index,” said Jon Starks, FTR chief operating officer. “For the month of May, truck utilization was one of the key drivers upward. Rates began to contribute positively to the result. Pricing isn’t getting any worse, and it’s starting to slightly improve.”

The Truckstop.com Market Demand Index — a spot market indicator — rose to 35.3 in the latest weekly update compared with 15.9 one year ago. The dry van index was 29.7, flatbed was 65.3 and reefer was 14.3. The three figures indicate that the spot market favors commercial fleets, according to Truckstop’s delineation of a pro-truck versus a pro-shipper market.

“All the numbers for all the segments are showing that this year is significantly improved over last year,” Starks said.

The DAT Trendlines report — also a spot market indicator — shows spot market loads were up 100% last month versus May 2016. The load-to-truck ratio, or the number of loads for every one available truck, rose 109% in dry van, 117% in flatbed and 98% in reefer year-over-year.

The Cass Freight Truckload Linehaul Index increased 1.1% year-over-year to 122.7. Before April, the readings contracted for 13 consecutive months. The index, which isolates the linehaul component of truckload pricing per mile, is calculated using information from bill payments through a St. Louis bank. The base of 100 is benchmarked to January 2005.

Morgan Stanley’s Truckload Freight Index, a measure of supply and demand for truckload services, continued a rise that began in March in the latest update on June 20. The index has been higher than 2016 levels since January, and it surged past 2015 levels in May, but it remains slightly lower than the 10-year average.

“We were expecting a seasonal uptick in this week’s update, given improving soft data and a seasonally strong June, though the magnitude of the outperformance exceeded our expectations,” Morgan Stanley analyst Ravi Shanker wrote. “Some of the demand outperformance was likely attributable to a peak produce/beverage season.”

“Things are moving, and we’re able to be selective about what freight we take and what we leave for other carriers to run,” one carrier told Morgan Stanley.

“Truckers need to rejoice; rates are going up and will go higher. Adept shippers will lean on their relationships with carriers, if they have good relationships to lean on,” a freight broker added.

“We are preparing ourselves for a difficult June and expect to see elevated rates through Independence Day. After that, we will assess the market and adjust accordingly,” another broker said.

In other economic news, the Institute for Supply Management reported the Purchasing Managers Index inched up 0.1 percentage point to 54.9% in May. ISM measures new orders, inventory levels, production, supplier deliveries and employment. Any level above 50% means expansion.

The Federal Reserve’s Industrial Production Index rose to 105, unchanged sequentially but higher than the 102.8 in May 2016.

New home construction in May dropped 5.5% sequentially to 1.09 million units on a seasonally adjusted annual basis. It also was 2.4% lower than one year ago.

The U.S. Census Bureau announced retail sales dropped 0.3% sequentially but were 3.8% higher than May 2016. The inventory- to-sales ratio remained at 1.37 for April (a lagging one month indicator), a figure that hasn’t changed since December 2016.