Market Gets Harsh Reminder That COVID Is Its Elemental Risk 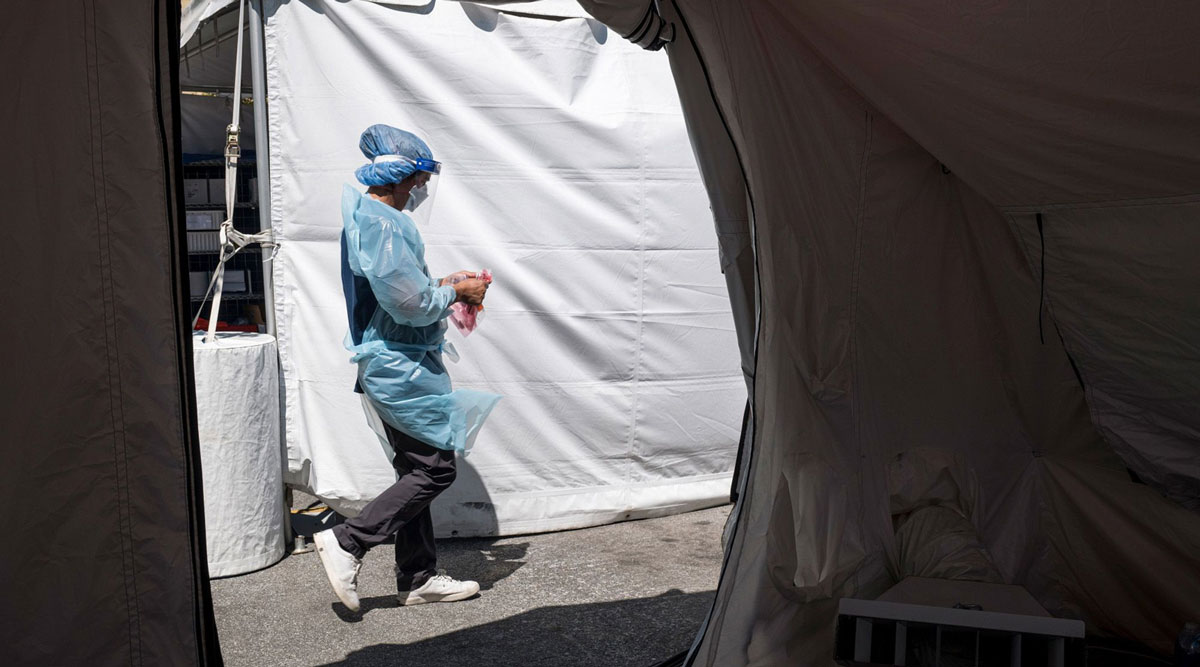 A public health worker walks to a tent to administer a COVID-19 test in Martinez, Calif., on Aug. 4. (David Paul Morris/Bloomberg News)

In 24 hours, investors have learned the jobless rate dropped, Tesla Inc. built more cars than forecast and that someone is back making huge options trades in tech megacaps. None of it mattered in markets captivated by news that not even the White House is safe from COVID-19.

Volatility surged, with internet and software stocks erasing two rousing sessions and the S&P 500 falling as much as 1.7%, as traders weighed the implications of the president’s positive test result. The tech-focused Nasdaq 100 fell as much as 3.1% amid declines for companies including Apple Inc., Microsoft Corp. and Amazon.com Inc. The CBOE Volatility Index, known as the market’s fear gauge, jumped the most in a month before paring the increase.

The Oct. 2 news on the virus and its ever-present companion, stimulus, ignited a cacophony of divergent market analysis. Will the diagnosis speed or impede stimulus? Do investors need more or fewer hedges for the election as a result? Does Donald Trump getting sick make a more severe lockdown likely, or will it ease concerns should his case prove mild?

All of it represented uncertainty, the one quantity investors can be said with any certainty to dislike.

“The COVID virus takes priority over everything else that’s going on in the market — you see it playing out before us,” said JJ Kinahan, chief market strategist at TD Ameritrade. “COVID, because it affects every area of our life, including the jobs report, is the No. 1 story, and any positive or any negative is what’s going to send the market reeling on bad news and rallying on really good news.” 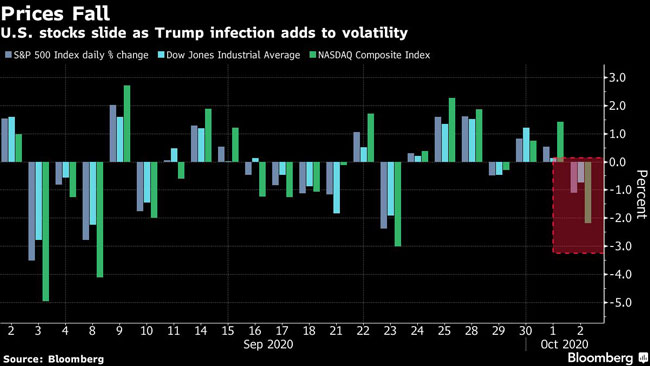 In classic 2020 fashion, investors returned to their favored stay-at-home plays Oct. 2. Peloton Interactive Inc. jumped more than 4.8% to a record before trimming that. The at-home workout company’s weekly gain reached 12%. Its shares now have risen for seven weeks straight, a record.

Some of those trades eased after House Speaker Nancy Pelosi said Trump’s diagnosis makes it clear the virus is a problem and increases the chances for a stimulus agreement. As the broader market pared gains, a Bloomberg basket of stay-at-home stocks that had been beating a group of companies that benefit most from an economic reopening by a percentage point gave up its lead.

The president’s test also amplifies recent gloomy developments around the virus as big cities once again turn into hotspots. New York reported the most new cases since May, while London is said to be at a “tipping point” with infections continuing to rise.

Case counts are spiking in the Midwest, and there are nascent increases in the Northeast. A rise in testing helps explain the recent bounce in cases, though positivity rates also have begun to inch higher, suggesting that the virus remains prevalent, said Oscar Munoz, macro strategist at TD Securities. 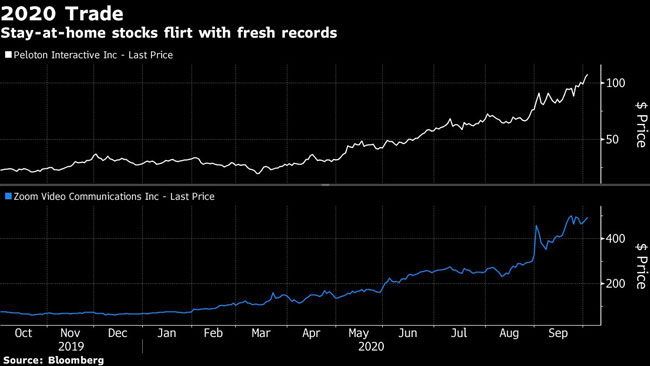 Economists at Bank of America said the virus situation has become more concerning, and case counts and positivity rates are at “untenable levels” in numerous states. Colder-weather months could contribute to a resurgence, which would pose a risk to the economic recovery, Stephen Juneau and Michelle Meyer wrote in a report.

“The economy continues to recover, but the next few months will be crucial to monitor as stimulus fades and more activities are moved indoors,” they said.

Thousands of job cuts this week showed that many companies still are wrestling with readjustments due to the outbreak. On Oct. 2, nonfarm payrolls data showed job gains slowed last month and many Americans quit looking for work, suggesting the recovery is slowing as the country struggles without fresh fiscal aid.

Investors are all over the map on whether progress is likely on another congressional stimulus deal. U.S. Pelosi said Oct. 2 the president’s diagnosis underscores the seriousness of the pandemic and may impact negotiations for a new package, adding that she’s optimistic a bipartisan bill can emerge.

The way Peter Mallouk, president and CEO of Creative Planning, sees it, the lack of new stimulus thus far could have ripple effects throughout the economy.

“We’re so far from the past stimulus that a substantial part of the economy would really be wrecked if it had to hang on on its own for four or five months,” said Mallouk, whose firm oversees about $56 billion in assets. “So the more certain we are that this is going to take longer than expected to resolve, the more likely we are to see more stimulus. The events overnight underscored it for everybody and made it easier for politicians to get something through.”