Many Trapped in Florida as Ian Heads to South Carolina 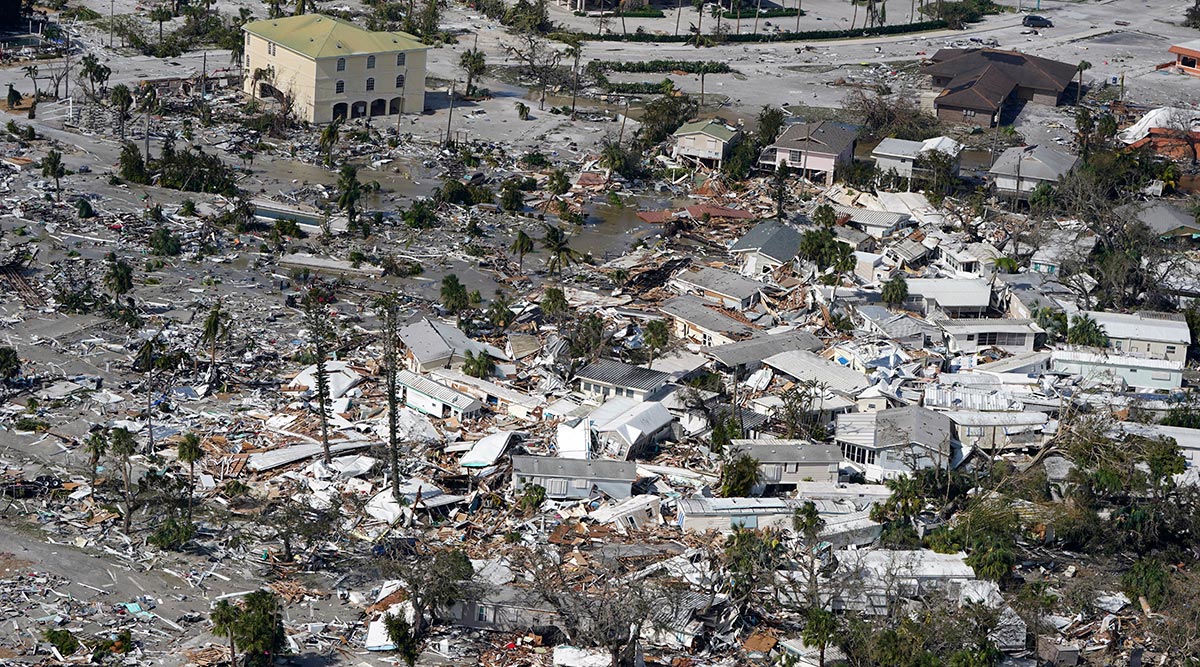 PUNTA GORDA, Fla. — Rescue crews piloted boats and waded through flooded streets Sept. 29 to save thousands of Floridians trapped after Hurricane Ian destroyed homes and businesses and left millions in the dark.

The destruction began to come into focus a day after Ian made landfall in Florida as one of the strongest hurricanes ever to hit the U.S. The storm flooded homes on both of the state’s coasts, cut off the only bridge to a barrier island, destroyed a historic waterfront pier and knocked out electricity to 2.67 million Florida homes and businesses, nearly a quarter of utility customers. At least one man was confirmed dead.

Ian struck Florida as a monstrous Category 4 storm, with 150 mph winds that tied it for the fifth-strongest hurricane ever to hit the U.S.

Even after weakening, Ian’s tropical storm-force winds still reached 415 miles from its center. Forecasters predicted the Atlantic waters would strengthen it to a Category 1 hurricane before it makes landfall Sept. 30 in South Carolina.

A hurricane warning is in effect for the South Carolina coast. #Ian is over the Atlantic and will strengthen again to hurricane status before making landfall Friday. Surge, flooding rain, damaging wind all ahead. Keep tuning in to @weatherchannel for updates and live coverage. pic.twitter.com/bp8G8UB0EL — Jacqui Jeras (@JacquiJerasTV) September 29, 2022

The National Hurricane Center warned storm surge of 6 feet or more was possible from Daytona Beach, Fla., to north of Charleston, S.C. Rainfall of up to 8 inches threatened flooding in the Carolinas and Virginia.

“It doesn’t matter what the intensity of the storm is. We’re still expecting quite a bit of rainfall,” Robbie Berg, senior hurricane specialist with the National Hurricane Center, said in an interview with the Associated Press.

The Florida Highway Patrol shut down the Florida Turnpike in the Orlando area and said the main artery in the middle of the state will remain closed until water subsides.

“We’ve never seen storm surge of this magnitude,” Florida Gov. Ron DeSantis told a news conference. “The amount of water that’s been rising, and will likely continue to rise today even as the storm is passing, is basically a 500-year flooding event.”

A Hurricane Warning has been issued for the entire South Carolina coast.

Our latest track has #Ian approaching the SC coast on Friday and moving farther inland across the Carolinas Friday night into Saturday. pic.twitter.com/5iWq7kStlt — The Weather Channel (@weatherchannel) September 29, 2022

Though downgraded to a tropical storm by the morning of Sept. 29, the National Hurricane Center said storm surge and flooding rains remained a threat as Ian crept across the Florida peninsula and emerged in the Atlantic Ocean north of Cape Canaveral. Forecasters predicted Ian would regain some strength while turning northward.

A hurricane warning was issued for the South Carolina coast, where the storm was expected to again make landfall, having already hit Cuba and Florida.

Sheriffs in southwest Florida said 911 centers were inundated by thousands of stranded callers, some with life-threatening emergencies. The U.S. Coast Guard began rescue efforts hours before daybreak on barrier islands near where Ian struck, DeSantis said. More than 800 members of federal urban search-and-rescue teams were also in the area.

Unbelievable amounts of water. This is NOT near the coast. This is CENTRAL FLORIDA! @weatherchannel #Ian @CityofKissimmee #flooding #HurricaneIan #Ianflorida #IanRescue For more updates go to https://t.co/AcRNA256uc and the Weather Channel app. You can also follow me on twitter pic.twitter.com/bae9SAy2nI — Heather Tesch (@HeatherTesch) September 29, 2022

In the Orlando area, Orange County firefighters used boats to reach people in a flooded neighborhood. A photo the department posted on Twitter showed one firefighter carrying someone in his arms through knee-deep water. At an area nursing home, patients were carried on stretchers across floodwaters to a waiting bus.

Firefighters on boats and National Guard soldiers in a tall truck rescued Joseph Agboona and his neighbors after water rose to the windows in his Orlando home.

“We we’re happy to get out,” said Agboona, who grabbed two bags of possessions, not knowing what will be left when he eventually returns. “It was very, very bad.”

“I was terrified,” Bartley said. “What we heard was the shingles and debris from everything in the neighborhood hitting our house.”

She said her 4-year-old daughter grabbed her hand and said: “I’m scared too, but it’s going to be OK.” The girl was right. The storm ripped away patio screens and snapped a palm tree in the yard, Bartley said, but left the roof intact and her family unharmed.

Authorities confirmed at least one Florida death — a 72-year-old man in Deltona who fell into a canal while using a hose to drain his pool in the heavy rain, the Volusia County Sheriff’s Office said. Two other storm deaths were reported in Cuba. 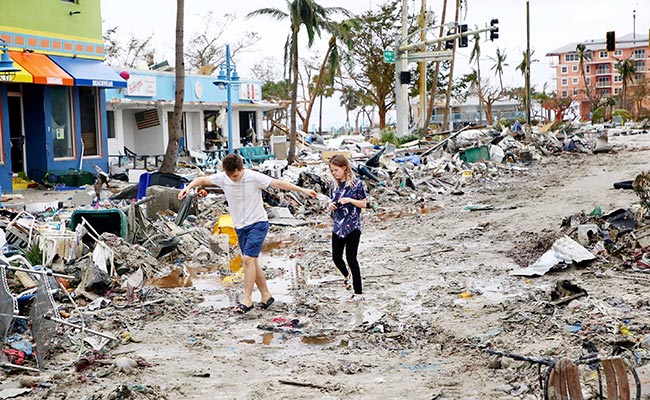 Lee County Sheriff Carmine Marceno said his office was scrambling to respond to thousands of 911 calls, but many roads and bridges in Fort Myers and the surrounding area were impassable.

“It crushed us,” Marceno told ABC’s “Good Morning America.” “We still cannot access many of the people that are in need.”

Emergency crews sawed through toppled trees to reach stranded people. Many in the hardest-hit areas were unable to call for help because of electrical and cellular outages.

“Portable towers are on the way for cell service. Chances are your loved ones do not have ability to contact you,” said the sheriff’s office in Collier County, which includes Naples. “We can tell you as daylight reveals the aftermath, it’s going to be a hard day.”

A chunk of the Sanibel Causeway fell into the sea, cutting off access to the barrier island where 6,300 people normally live. It was unknown how many heeded orders to evacuate, but Charlotte County Emergency Management Director Patrick Fuller expressed cautious optimism that worst-case scenarios might not have been realized.

No deaths or injuries have been confirmed in the county, and flyovers of barrier islands show “the integrity of the homes is far better than we anticipated,” Fuller said.

South of Sanibel Island, the historic beachfront pier in Naples was destroyed, with even the pilings underneath torn out, as towering waves crashed over the structure. “Right now, there is no pier,” said Penny Taylor, a Collier County commissioner.

In Port Charlotte, a hospital’s emergency room flooded and fierce winds ripped away part of the roof, sending water gushing into the intensive care unit. The sickest patients — some on ventilators — were crowded into the middle two floors as the staff prepared for storm victims to arrive, said Dr. Birgit Bodine of HCA Florida Fawcett Hospital.

One Bridge Damaged by Ian Reopens, and a Truck Is Among First to Cross It