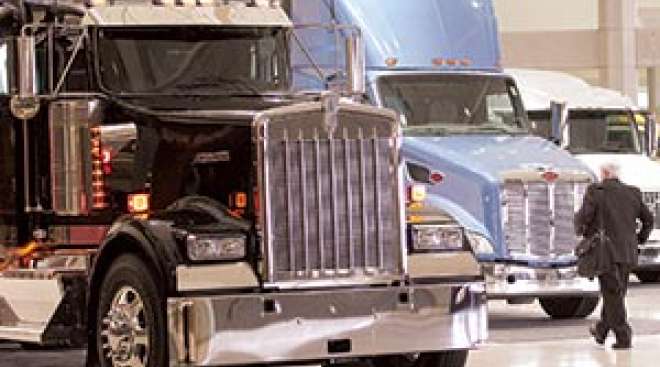 Kenworth Trucks and Peterbilt Motors will return to the Mid- America Trucking Show in March after their one-year hiatus, and, so far, these Paccar Inc. brands will be the only North American heavy-duty truck makers to attend.

The two original equipment manufacturers made separate announcements within minutes of each other on Oct. 17 about MATS.

“Kenworth is excited to be a part of the 2017 Mid-America Trucking Show,” said Kenworth GM Mike Dozier, adding the company would use the opportunity for “displaying our industry-leading products and technologies that are focused on supporting the needs of their businesses, as well as the comfort, safety and productivity of the driver.”

MATS takes place annually in Louisville, Kentucky, and is scheduled next year for March 23-25.

In interviews with Transport Topics, several other major industry suppliers disclosed their marketing plans for 2017, too.

The five other heavy-truck OEMs had previously announced shifts for next year to the new North American Commercial Vehicle Show in Atlanta.

The commitment to MATS by the Paccar companies neither eliminates the possibility of a presence at the inaugural NACV Show, Sept. 25-29, nor guarantees it.

MATS has been an annual event since 1972, and NACV is planned only for odd-numbered years.

Independent engine maker Cummins Inc. and brake and safety systems manufacturer Bendix Commercial Vehicle Systems both said they will split their attention evenly between MATS and NACV. Cummins and Bendix are both long-time supporters of MATS.

“We will be at MATs and NACV in 2017. Both will have an important place in our programs in 2017, and we’re looking forward to each event,” said spokeswoman Barbara Gould for Bendix.

“For 2017, Cummins plans to attend at every industry trade event where our OEM partners and end customers expect us to be. As the market leader we are expected at every show,” said on-highway spokesman Mario Sanchez-Lara of the Cummins engine business.

Kenworth and Peterbilt are major Cummins customers, as is Navistar International Corp., which will exhibit at NACV.

Great Dane Trailers, a charter exhibitor at MATS, is flipping to NACV, the company said Oct. 19.

“We support the NACV Show’s focus on creating an exhibition that responds to the changing business environment and our customers’ needs. We believe this show will encourage engaging displays of trailer and truck body innovation,” President Dean Engelage said.

“We look forward to using the show to demonstrate how Great Dane offers innovative business solutions that ensure safety and efficiency, two of our core fundamentals,” Engelage added in a statement.

Craig Bennett, Utility Trailer Manufacturing Co.’s senior vice president of sales and marketing, said, “We are currently planning on attending both shows. They will serve different segments of the trucking industry.”

Wabash National Corp. is not going to one and still deciding on the other.

“As in previous years, we will not be attending MATS,” said spokeswoman Dana Stelsel of Wabash National Corp., adding that no decision has yet been made on NACV.

NACV is owned and operated by the U.S. subsidiaries of Newcom Business Media of Toronto and Deutsche Messe AG of Hanover, Germany.