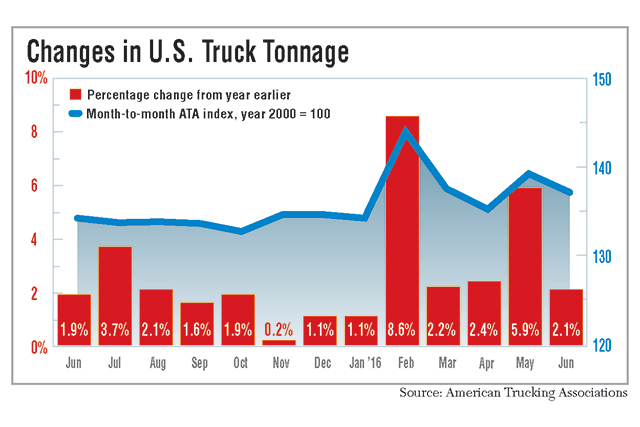 This story appears in the July 25 & August 1 print edition of Transport Topics.

June’s 2.1% year-over-year increase in American Trucking Associations’ tonnage index represents another upward tilt in the uneven 2016 freight market that experts characterize with words such as “choppy,” “seesaw” and “zigzag.”

The index uses business activity from the year 2000 as a baseline of 100.

“The seesaw pattern continued again in June with tonnage falling after a good rise in May,” said Bob Costello, ATA’s chief economist. “Looking ahead, I expect the freight environment will remain choppy,” he said of the July 19 report.

First-half tonnage’s up-and-down pattern included May’s 5.9% increase and an 8.6% February gain, interspersed with four other months that averaged 2% growth, year-over-year. Since that February spike, tonnage has declined in three of the past four months.

In fact, year-over-year tonnage rose about 2% in eight of the tonnage reports since June 2015.

The June Cass Freight shipment report, primarily based on trucking, moved opposite from tonnage. Shipments fell 4.3%, year-over-year, and rose 1.7% sequentially.

Spot markets tracked by load board operator DAT were strong, improving year-over-year for the first time in 2016. June loads rose 29% from May, partly due to the seasonal increase in produce shipments.

Costello stressed good news, saying that trucking is benefiting from a diverse freight market, including stronger consumer shipments, weaker industrial markets and the inventory overhang that has been weighing down tonnage since mid-2015. Costello believes it could continue until year-end.

“The further we progress through the [reduction in inventory], the better freight will get,” he said.

Jumbled freight trends are in contrast to stronger June economic indicators. The Purchasing Managers Index reached 53.2, tops in 2016. Retail sales rose 0.6%, and building supply store sales rose 3.9% from May to June. Industrial production rose more slowly at 0.6%, but that was the best mark since February.

Costello cautioned that the PMI increase will be only a small help to trucking, with a looming future decline due to the stronger dollar.

Meil believes the index needs to top 54 or 55 to give a strong growth signal.

“Strong retail sales in a month may lead to better truck freight the following month as they replenish stores,” Costello said. “They don’t necessarily match up month for month or week for week.”

Freight markets currently are being held back by the strong dollar that is hurting U.S. exports and the need for trucking. Inventory troubles are another factor, Meil said.

“It’s fair to say that if you are guided by the numbers, and negative polling of the two leading presidential candidates, you can’t help but conclude that this is discouraging to John and Jane Doe on Wall Street but also for business leaders who are asking, ‘Do I want to take a big step in this environment?’ ”

Meil said he thinks the overall business malaise, including a glut of trucks and other heavy equipment, will continue.

“The smallest fleets are enjoying a bit of the spillover,” she told TT. Spot market van freight topped the year-earlier period for the first time since December 2014.

The June pace continued into early July, breaking a traditional pattern, before softening later in the month.

“We are in a bit of uncharted territory,” Dorf said. “After a prolonged lull, things are starting to come up. If this trend holds up, the third quarter could be better than last year, and so could the second half.”

She said strong individual markets include Memphis, Tennessee, to Columbus, Ohio, where rates rose 15 cents per mile in a single week, far above the typical move of a penny or two. Dorf said the increase reflects back-to-school products because Columbus is a retail center.

On the other hand, markets such as Mexico-U.S. freight remain uneven.