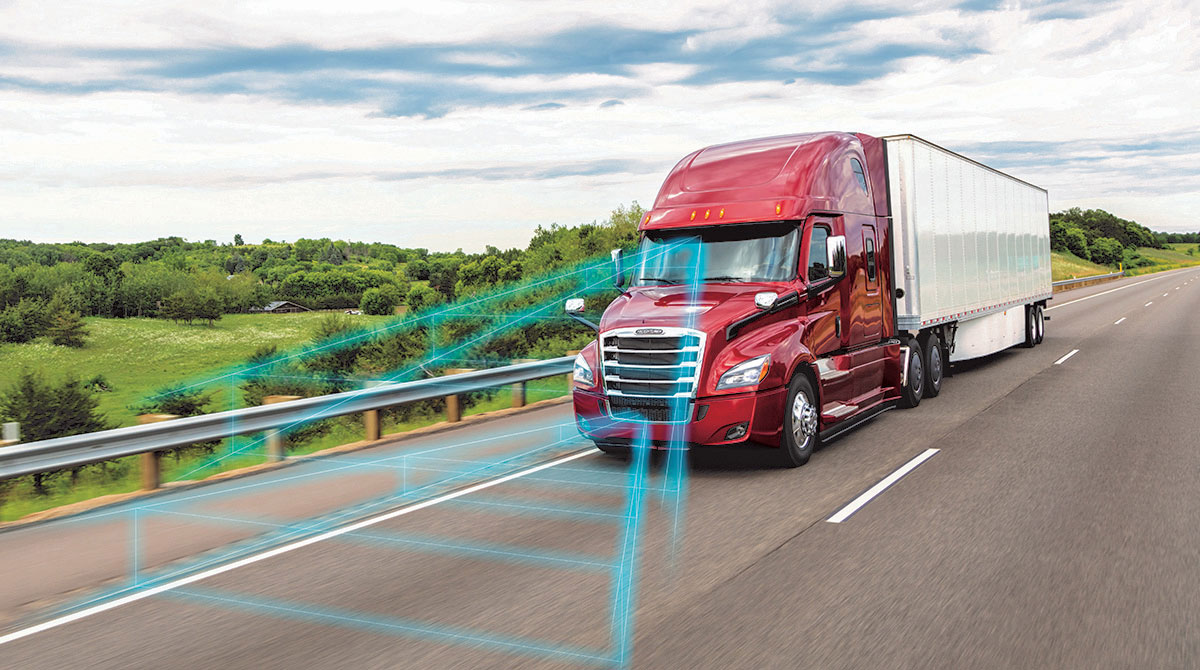 Truck makers offer a range of safety technologies such as automatic emergency braking, but not all motor carriers choose to adopt these systems. (Detroit)

It’s likely too soon to answer that question, but efforts by federal regulators to require such technology on new trucks are quietly progressing. In recent weeks, the National Highway Traffic Safety Administration has said it is moving toward a proposed requirement for automatic emergency braking on heavy trucks as soon as next year.

Some trucking trade organizations, however, are hoping that education, data and ongoing research efforts underway through a federal program called Tech-Celerate Now will hasten acceptance and adoption of these safety technologies on a voluntary basis.

“The program is one of several strategies the FMCSA is pursuing to ensure that today and tomorrow’s large truck fleets are as safe as technologically possible,” said Shashunga Clayton, director of FMCSA’s Office of Outreach and Education.

Clayton added, “The agency will also be working in close collaboration with NHTSA on the integration of automatic emergency braking technology in large trucks as well as reviewing data collected through NHTSA’s recently announced standing general order requiring crash reports for vehicles with [advanced driver-assistance systems] and [automated driving systems], including large trucks.”

Last month, NHTSA issued a “standing general order” requiring manufacturers and operators of vehicles equipped with SAE Level 2 driver-assist systems or SAE Levels 3-5 automated driving systems to report crashes. NHTSA said the action will enable it to collect information necessary for it “to play its role in keeping Americans safe on the roadways, even as the technology deployed on the nation’s roads continues to evolve.”

The safety technologies included in the Tech-Celerate Now program range from automatic emergency braking and adaptive cruise control to active steering systems, lane-departure and forward-collision warning systems and onboard cameras.

“None of these technologies are regulated, as of today,” said Ross Froat, ATA’s Director of Technology and Engineering Policy. “We’re being very proactive in figuring out how they could be regulated, and if they should.” 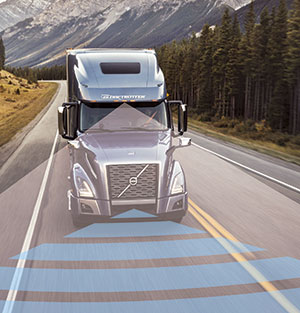 “The adoption rate is better than in years past, but we still have a long way to go,” said Dan Horvath, ATA’s vice president of safety policy. “The most successful adoption of safety technologies that I’ve seen over the years has been when fleets start with pilot programs, and then move from the pilot program to doing it fleetwide. But during the process, fleets need to make sure drivers have buy-in.”

“One of the most important things is technologies that are not liked by truck drivers are probably not going to see huge leaps of adoption by fleets,” Murray added. “The last thing a fleet wants to do with this ugly driver shortage is put in a technology that’s going to push away drivers.”

Suppliers of braking and safety technologies are well aware of the importance of driver acceptance.

“Training is half the battle. To help carriers understand the capabilities of the systems, the post-sales support is very critical,” said Lance Hansen, vice president of aftermarket sales, fleet service and field operations for Bendix Commercial Vehicle Systems.

One of the major efforts involved in the Tech-Celerate Now program is to get a better sense of industry adoption rates.

Last year, ATRI, ATA and OOIDA worked on baseline statistics for carrier adoption and acceptance rates for safety technologies. The organizations collected data from a survey of 250 “TMC fleets” — those TMC members reporting for mostly large fleets that tend to be early adopters of technologies — and a survey of more than 700 independent owner-operators. 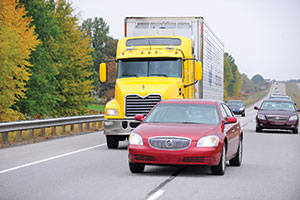 “We don’t necessarily see a ton of return on investment,” said Andrew King, a research analyst with the OOIDA Foundation. “When it comes to our guys, we have a much different adoption rate than the larger carriers.”

The OOIDA Foundation survey showed that the highest adoption rate among owner-operators was 57% for road-facing cameras. “A lot of that has to do with the insurance discounts,” King said.

Other owner-operator adoption rates were 21% for automatic emergency braking, 24% for forward-collision warning, 18% for lane-departure warning and 10% for driver-facing cameras, King said.

“When you have owner-operators who have been in business for 20-plus years and have never had an accident, or if they did and it wasn’t their fault, the technologies don’t necessarily resonate with them,” King said.

Even among larger fleets, some of the technologies do not yet have major penetration, ATRI’s Murray said.

Braswell said some drivers continue to harbor concerns that automatic emergency braking takes over control of driving the truck, a notion that experts say is not accurate.

“As one truck driver pointed out, the vehicle’s reaction is to start braking when the best solution might be turning out of a collision situation,” Murray said. “That’s a legitimate concern. But what they don’t sometimes understand is the driver has the last step in the process. The driver can easily overtake the technology’s braking. The driver is the last decision-maker in the process.”

As for the inward-facing cameras, many drivers regard cameras aimed at their faces as a “Big Brother” or privacy issue, Braswell said. 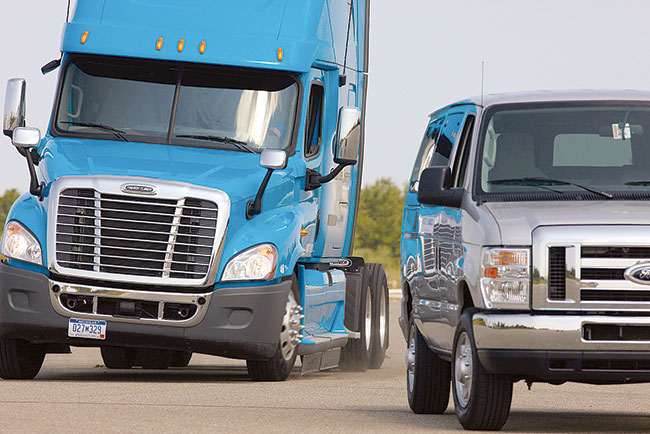 Truck makers and their suppliers have been introducing increasingly advanced active braking and steering capabilities to assist drivers. (ZF)

Braswell said air disc brakes are very popular with many carriers because they can stop a truck faster than traditional drum brakes. Among the TMC motor carriers surveyed, the adoption rate for air disc brakes was about 45%, he said.

Carriers and drivers generally like forward-facing cameras since they can document what happens in the event of a crash.

Some newer technologies, such as lane-keep assist, have low carrier awareness, according to Braswell.

“With our advanced driver assistance systems, we’re seeing take rates with equipment manufacturers north of 50%,” Beyer added. “I can understand some of the reticence, but it’s indisputable from the total owner cost of ownership perspective. These systems do pay for themselves.”

Indeed, a number of studies have concluded that the technologies at low and high speeds significantly reduce the number of front-to-rear accidents and injuries.

Yet, the initial cost of these systems remains an obstacle to adoption for many. The top three considerations for adoption of safety technologies are cost, insurance rates and driver acceptance, according to the Tech-Celerate Now survey.

“I think on the front end it’s sticker shock,” said Brandon Knight, managing principal of industry for CliftonLarsonAllen, an accounting firm commissioned by ATRI to develop a white paper on ways to recover up-front costs.

“The up-front cost is significant,” he said. “Maybe you’re a little apprehensive to jump into some of these technologies, but look what it does to the likelihood of claims or accidents.”

While there may not be any immediate savings on insurance premiums, over time a reduction in the number of crashes can ultimately lower premiums, experts said.

Then there are potential paybacks from depreciating the tech equipment. If a company pays $2,500 for a safety system, for example, “that’s $2,500 of additional expense that we could depreciate in a current year if we wanted to — or we could depreciate that out over a few years,” Knight said.

In addition, Knight said there are discussions underway with federal officials for government tax incentives for adoption of some of the safety technologies.

“One of the biggest issues we face in the program and as an industry is both drivers and carriers think there could be an insurance premium discount or benefit associated with this,” ATRI’s Murray said. “Unfortunately, commercial insurance in trucking does not generally give front-end discounts like you get from a State Farm or a Liberty Mutual with your car. So we buy these and we don’t get immediate discounts, but what the commercial insurance model says is if you buy those, and you have fewer crashes, you won’t pay as much.”

Despite some challenges, ATA’s Froat said driver-assistance technologies are working, and quickly getting better.

“I feel that technology in trucks is in a good state right now,” Froat said. “I also believe that through FMCSA’s Tech-Celerate Now program that it will be in a better state than it would be without it. I believe that these technologies are being adopted by larger motor carriers, and I believe that mid[size] to small motor carriers are considering them — maybe testing one or two of them.”