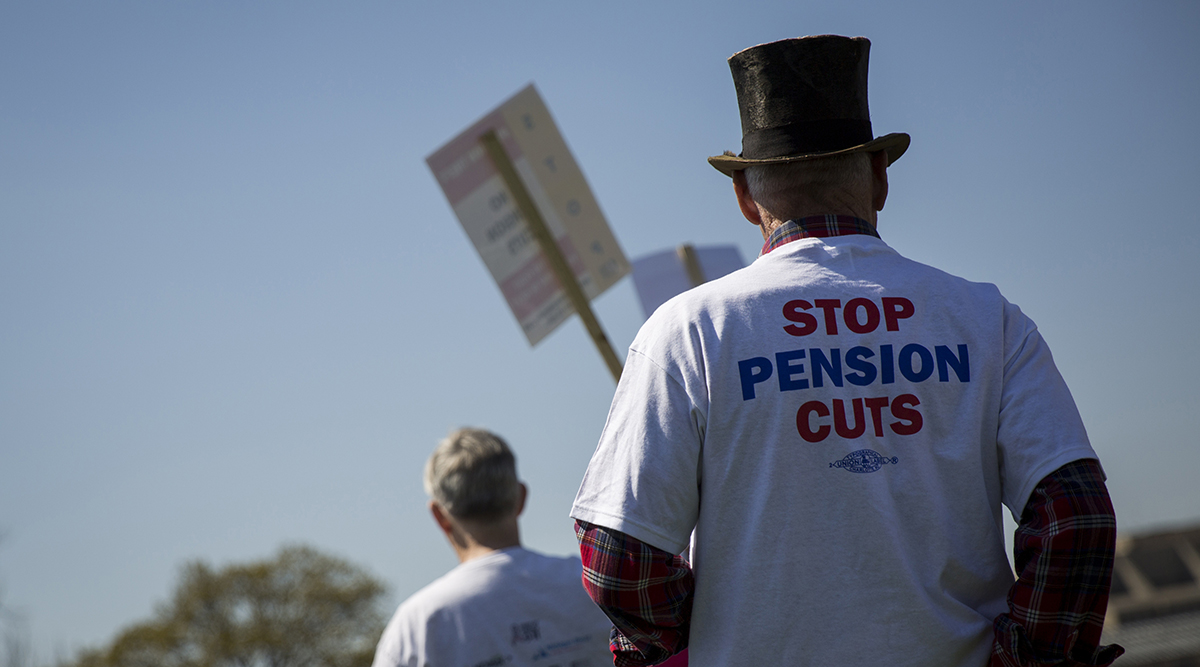 Members of the International Brotherhood of Teamsters attend a rally in Washington, D.C., in 2016. The demonstrators are protesting a plan by the Central States Pension Fund to reduce payments to retirees. (Drew Angerer/Bloomberg News)

Jim Onley logged more than a million miles behind the wheel during his more than three-decade career as a truck driver, but a letter delivered to his New Milford, Ill., home in April stopped him in his tracks.

Onley retired in 2002 when his employer, Consolidated Freightways, went bankrupt and closed its doors. The company was a member of the Central States Pension Fund, the nation’s fourth largest multiemployer pension fund, which told its nearly 400,000 pensioners in April that it will run out of cash by 2025, and possibly sooner.

There are more than 1,000 multiemployer pension funds in the U.S., and about 100 of them — of which Central States is the largest — are projected to run out of money within 20 years. The magnitude of these failing private sector pensions is far smaller than the looming catastrophes facing thousands of underfunded local and state government pensions across the country. Nevertheless, if all endangered multiemployer pension funds were to go under, some 1.2 million active and retired workers in the U.S. would be left with a fraction of the pension benefits they were promised.

In many cases, endangered multiemployer pension funds haven’t fully recovered from downturns in financial markets during the last decade. Another reason the funds are collapsing: Many companies that used to pay into the pension funds have either left or gone out of business, such as Consolidated Freightways, the company Onley once worked for. Trucking companies and factory workers — two industries that have shrunk considerably in recent decades — have traditionally made up the bulk of Central States members.

“There’s fewer people paying into the fund and there’s still all these people like me collecting a pension,” said Onley, 78. “I’m just worried about my pension drying up because I think I’m probably going to live to be 100.” 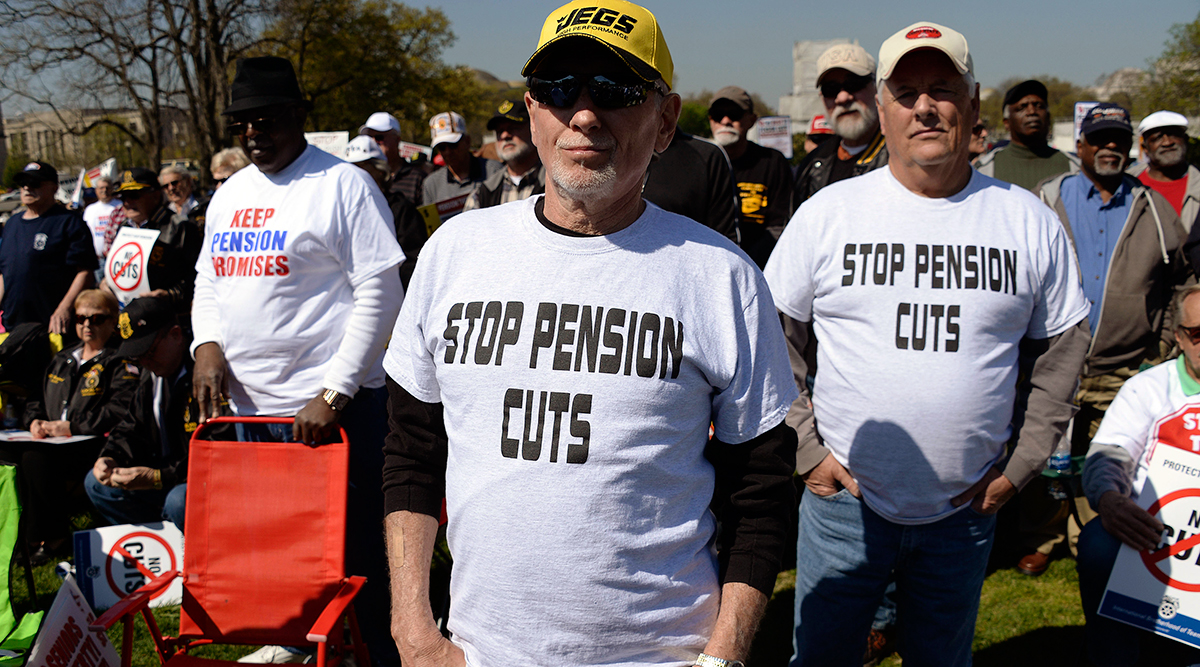 “If those pensions fail, the economic impact in the Rockford area and nationwide would be just devastating,” said Eric Calvert, secretary and treasurer of Teamsters Local 325 in Rockford.

Calvert estimates that 80% of the local’s 1,300 members in the Rockford area are affected by the looming collapse of Central States. He’s urging his members who are affected to contact their representatives in Congress and demand a solution to the problem. A bipartisan 16-member Congressional committee is tasked with crafting legislation by the end of November to do just that.

That’s not all. A Central States collapse would also push the government’s pension insurance program into insolvency sooner than projected. The Pension Benefit Guaranty Corporation multiemployer program funnels cash to pensions that run out of money so they can pay benefits to retired workers. The program is expected to run out of money within 10 years.

It’s not yet clear what type of solution Congress will settle on. Possibilities include raising employer contributions, reducing pension benefits or some form of what amounts to a government bailout of the Pension Benefit Guaranty Corporation so it can prop up failing pensions.

UPS and the International Brotherhood of Teamsters have pitched similar proposals that would effectively have the federal government sell bonds and use the proceeds to provide low-interest loans to failing multiemployer pension plans. Pension funds would be required to invest the proceeds into safe investments such as annuities, and the money would be repaid within 30 years.

Bustos is among Democratic leaders in Congress who endorsed this concept last fall as a means to prevent any cuts to retirees’ benefits. Members of failing multiemployer plans “did the right thing every step along the way, but they’ve gotten a raw deal,” Bustos said when Democrats unveiled their plan in November. Democrats acknowledge, however, that the loans wouldn’t be enough to cover shortfalls of all failing multiemployer plans and that Congress would need to appropriate more money to bolster the Pension Benefit Guaranty Corporation. That would be cheaper, they say, than reviving the pension insurance program should it fail — a scenario that the Congressional Budget Office estimates would cost $101 billion over 20 years.

“There are many ways to skin the cat,” said J.P. Aubry, director of research at the Center for Retirement Research at Boston College. “But there’s really just three parties that are involved in this problem: the employers, the employees and the government, which is the taxpayer.”

Active and retired employees in many multiemployer pension plans have already been subject to benefit cuts over the past decade, Aubry said, and many employers have scaled up their contributions, too.

“There’s no free lunch in my mind,” Aubry said. “Whether you’re talking about selling bonds or higher employer contributions or benefit reductions — you’ve made a promise of $76 billion over what you have. That’s the pain that needs to be spread in some way.”

Onley said the pain shouldn’t fall entirely on the shoulders of retirees.

“It’s not our fault that Central States made some bad decisions,” Onley said. “I just want some answers. I want someone to tell me what they’re going to do to fix this.”