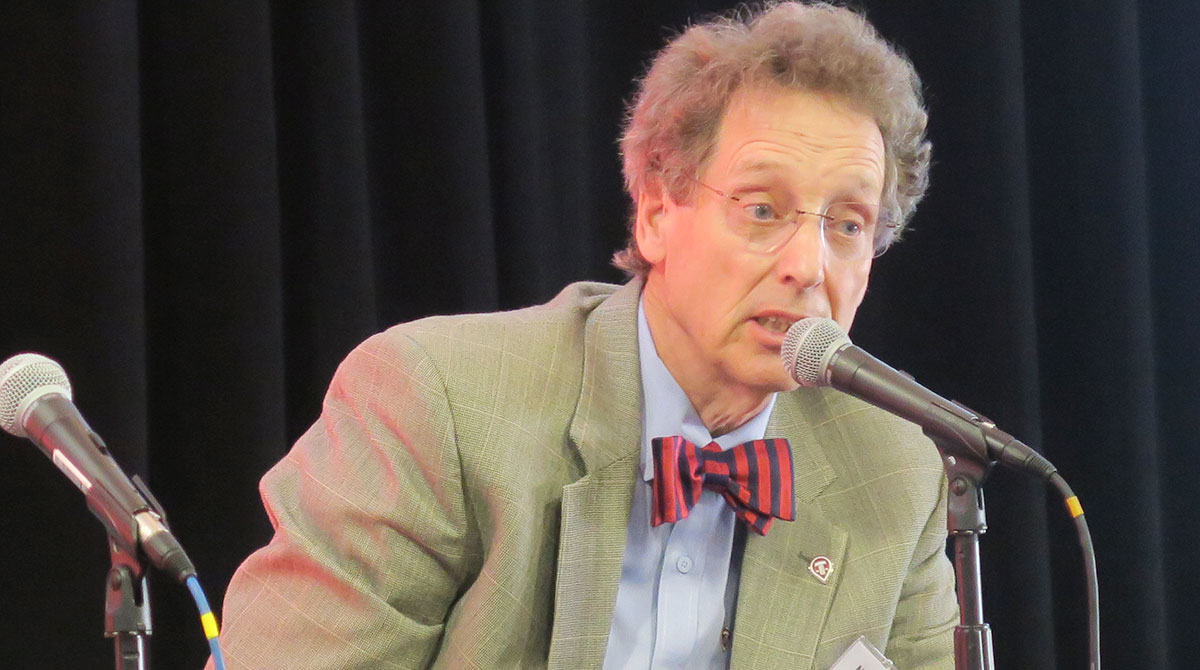 PALM DESERT, Calif. – The strongest freight market in the past 50 years won’t last much beyond this year, a prominent industry economist said here last week.

“Take as much as you can,” Noel Perry told attendees at the Transportation Intermediaries Association conference April 11, “but don’t bet the company on next year being as good.”

It’s been nine years since the last economic recession, and barring a war or global financial crisis, Perry said there’s “no question we can sustain another couple years” due to strong spending by consumers and businesses and continued borrowing by the United States to finance government spending. After that, he said the odds favor an economic downturn and a quick return to normalcy in terms of supply and demand for trucking services.

Currently, demand for trucks far outstrips supply in most parts of the country, with companies like Truckstop.com and DAT Solutions — another freight-matching company — reporting record-high ratios of loads to trucks for freight on the spot market.

Perry said a federal mandate that truck drivers use electronic logging devices to record hours of service is a minor factor in the current capacity crunch. He noted that “self-enforcement” has been occurring for several years as most large trucking companies installed the devices ahead of the mandate.

“The economy is the defining event, not ELDs,” Perry insisted.

Although some drivers have cut back on the miles they run, Perry said he believes that by next year any constraint on truck capacity goes away as carriers hire more drivers and adjust shipping schedules and routes.

“History shows that the supply of drivers will be adequate,” Perry said, noting that firms added 80,000 truck drivers in the fourth quarter and with equally strong numbers reported in the first quarter, “we can easily catch up by the end of the year.”

In terms of economic growth, Perry said any increase in gross domestic product of 3.5% or more would be really good for trucking, growth from 1.5% to 3.5% would be OK and anything below 1.5% would be bad.

While President Donald Trump has stated a goal of boosting economic growth to 4% or more, Perry said that will be difficult to achieve; in part, because more of the U.S. economy today is made up of slower-growing services rather than manufacturing.

“You should not expect a return to the 1950s unless we profoundly change the way we do things,” Perry said.

Economic recoveries end for two reasons, Perry said. One is an external shock, such as the Arab oil embargo in 1979. The other is overbuying, which leads to surpluses that are corrected only by cutting back on production.

Automobiles are in the overbuying category, Perry said, since production has exceeded the projected level of replacement demand for several years.