The U.S. average retail price of diesel jumped 6.3 cents to $2.882 a gallon as oil climbed to its highest price since June 2015. The spike in oil came amid announced increases in demand and plans to tighten crude supplies further in 2018.

Prices for trucking’s main fuel rose in all regions.

Gasoline and diesel inventories fell for the week ending Nov. 3, and both are in the lower half of the average range for this time of year, EIA reported. 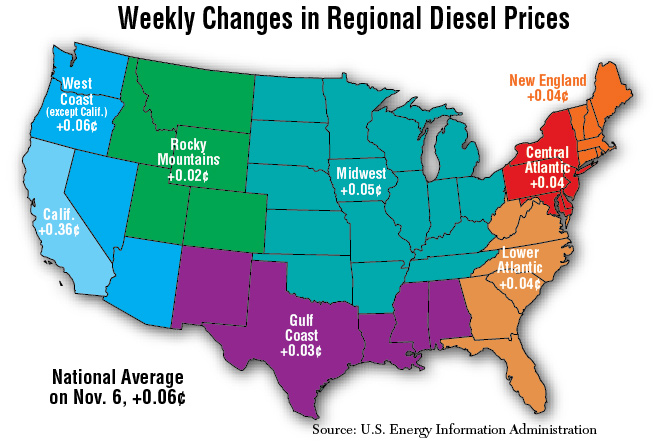 One truckload carrier is fueling portions of its fleet with diesel while its other trucks use compressed natural gas, and manages against price volatility year-round, supported by fuel surcharges.

Diesel fuel surcharges that are in place protect his carrier from virtually all movement up or down, Paper Transport Inc. President Jeff Shefchik told Transport Topics. 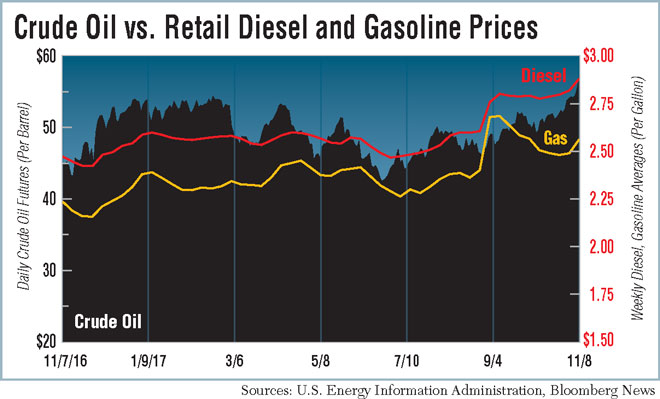 “I think managing price increases in diesel is really a long-term play in doing all the right things about managing your miles per gallon,” he said. “You can’t turn that off or on with the moves in the market. It’s spec’ing the right trucks, managing your drivers.”

Also, as diesel has started to climb, CNG prices have not moved, Shefchik said.

“I don’t think there is enough of a [price] gap, yet, to get people on the bandwagon and start switching to CNG, especially since the 50-cent-a-gallon tax credit that was in place in years past for CNG is not in place this year. That makes a big difference, and we never know if Congress is going to re-enact that retroactively,” Shefchik said.

The CNG tax credit expired Dec. 31, 2016. PTI has fuel surcharge programs for CNG, too, which vary by customer, he said.

Meanwhile, Arizona is looking to become the first state in more than 50 years to be allowed to use publicly maintained rest areas to sell diesel and gasoline and other services.

Arizona Gov. Douglas Ducey, in a Nov. 6 letter to U.S. Department of Transportation Secretary Elaine Chao, asked that Arizona be exempted from an “archaic” federal law that prohibits commercial activity on the state’s rest areas [other than those grandfathered in].

Arizona is seeking approval from DOT for a pilot project at a rest area through an agreement with a private sector partner.

However, such a project, if expanded, would displace many of the restaurants, travel plazas, truck stops, convenience stores and other businesses that exist at highway exits throughout the state, according to the National Association of Truck Stop Operators.

“Rather than privatizing a government function, this proposal would transfer sales away from the private sector to the government,” Natso CEO Lisa Mullings said in a statement.

While the Organization of Petroleum Exporting Countries and its allies, including Russia, are seen prolonging their output curbs past March to clear a global glut, the sustainability of crude’s current rally will depend on whether there’s enough demand to soak up supply, according to Bloomberg News.

At the same time, China raised the quota for use of overseas oil by nonstate companies in 2018 by 63% versus the prior year, according to a statement from the Ministry of Commerce, Bloomberg reported. The increase is equivalent to 1.1 million barrels a day, which is more than what OPEC member Algeria pumps.