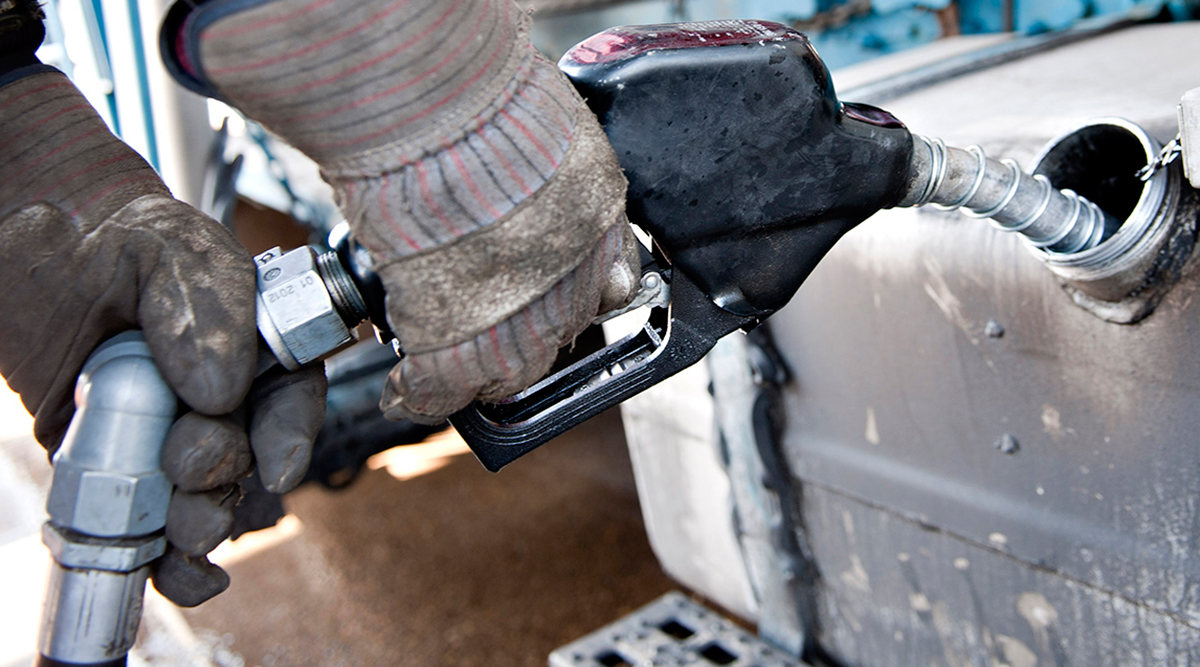 Trucking’s primary fuel is 60.7 cents a gallon less than it was a year ago. (Daniel Acker/Bloomberg News)

Diesel fell for the second consecutive week, by six-tenths of a cent to $2.427 a gallon from $2.433, the Energy Information Administration reported July 27.

With the decrease, the price of trucking’s primary fuel is 60.7 cents a gallon less than it was a year ago.

Meanwhile, the average price of gasoline also dropped, by 1.1 cents to $2.175. Gasoline is 54 cents a gallon cheaper than a year ago.

The cost of diesel decreased in eight of the 10 regions of the country surveyed by EIA, increasing in California and New England. Diesel moved up eight-tenths of a cent in California to $3.256 from $3.248. Still, diesel is 68.4 cents a gallon less expensive there than it was a year ago.

The biggest drop came along the Gulf Coast, where diesel fell 1.5 cents to $2.183 a gallon compared with $2.198 the previous week. The lowest price nationwide is in the Gulf Coast region, which is home to much of the nation’s oil and gasoline production and a large share of the refining capacity.

The West Coast, not including California, saw a drop of 1.1 cents from last week. A gallon of the fuel in that area now is $2.586 compared with $2.597 the previous week. Diesel is 60 cents a gallon less expensive there than it was a year ago.

American Trucking Associations Energy and Environmental Affairs Counsel Glen Kedzie told Transport Topics that the decline in diesel prices shows that even as trucking is holding its own during the pandemic, there is an abundance of the fuel. That’s because 480,000 school buses and 36,000 privately owned motorcoaches have been parked for months because schoolchildren are staying home and the over-the-road bus industry has been crippled.

“Oil is in a state of flux right now. We don’t know when a vaccine is going to be coming, when it comes. That’s the big driver in this,” Kedzie said. “There’s been an oversupply of diesel. It’s going to be unsettled until the whole virus thing is figured out. There’s no big demand for diesel.”

Another factor stabilizing oil prices is the agreement between Russia and OPEC members to production cuts. Those nations agreed to the deal in April when oil prices plunged.

The oil-producing nations slashed production by 9.7 million barrels a day in April, about 10% of global daily supplies, and some additional cuts were promised later in the summer. But the agreement is due to expire at the end of July.

Kedzie forecasts oil will remain stable for the foreseeable future.

“You’re going to see little ups and downs. We’re in the $40-$45 bracket, which is a good place to be,” he said, referring to the price of a barrel of oil on world markets.

The weekly Baker Hughes rig count shows domestic oil production continues to fall. On July 24, the industrial service company said two more rigs shut down, and now 251 are operating in the U.S.; that represents a 73.4% drop-off from 946 a year ago.

Internationally, 781 rigs are operating, but 1,138 were in service last July.

Steve Rush, CEO of Wharton N.J.-based Carbon Express, a liquid bulk and flatbed carrier, told TT that even with the declining price of fuel, his company isn’t saving much because fuel has never been a profit center in his business.

“We look at the miles, and we charge by the mile, rather than a percentage, because what’s a percentage, a percentage of what? It’s always a crapshoot,” he said. “The only time we run into a fuel problem is when we deal with brokers. You can’t get a fuel charge on them, no way, no how. They won’t pay a fuel surcharge.”