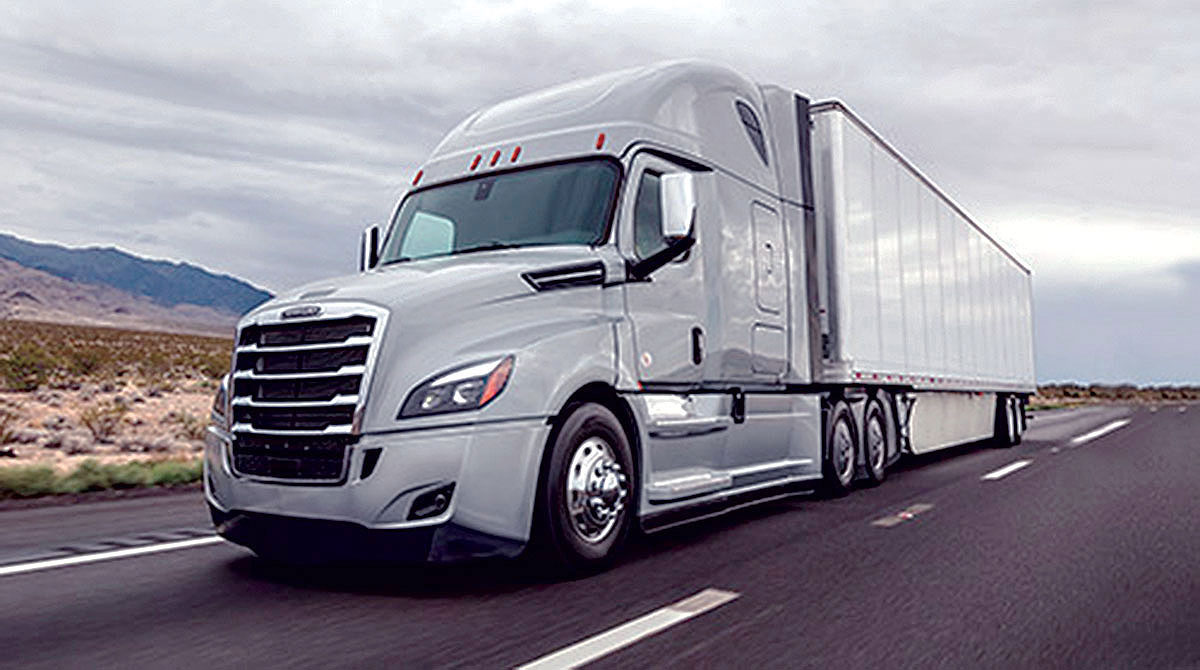 Class 8 U.S. retail sales in December rose 15.5% compared with a year earlier, and reached the high point for the year, WardsAuto.com reported Jan. 12.

December also was the best sales month since September 2019.

December is typically the best sales month of the year amid performance bonuses and the need to move inventory to avoid taxes on any units that remain at year end, said Steve Tam, vice president at ACT Research.

“That aside, the truck makers are trying their darnedest to clear some of these red-tag or incomplete trucks — that probably bore some fruit,” he said, leading to better-than-expected sales.

“So kudos to them for that,” he said. “It was a stronger-than-expected push at year end.”

Ake agreed the number indicated sidelined, incomplete trucks were finished, shipped and actually sold, “which is quite an accomplishment.” 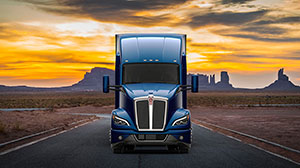 He said the truck makers apparently got some important parts deliveries early in the month.

He said some reports deliveries especially on commodity materials have improved.

Truck makers’ respective 12-month market shares remained largely the same — except for Kenworth Truck Co., a unit of Paccar Inc., whose share fell to 14.6% compared with 15.7% a year earlier.

“Overall 2021 saw robust freight and vocational demand due to the strength of a growing economy,” said Jonathan Randall, senior vice president of sales at Mack. “Consumer spending, manufacturing and residential construction all contributed to Mack’s strong December and 2021 performance.”

In December, Freightliner, a unit of Daimler Trucks North America, remained the market leader with 8,315 sales, up 19.1% compared with a year earlier, and notched a leading 33.6% share.

The largest increase in year-over-year sales compared with the 2020 period belonged to Volvo Trucks North America, which climbed 81.2% in December to 3,657 units. That earned it a 14.8% share. VTNA is a unit of Volvo Group. 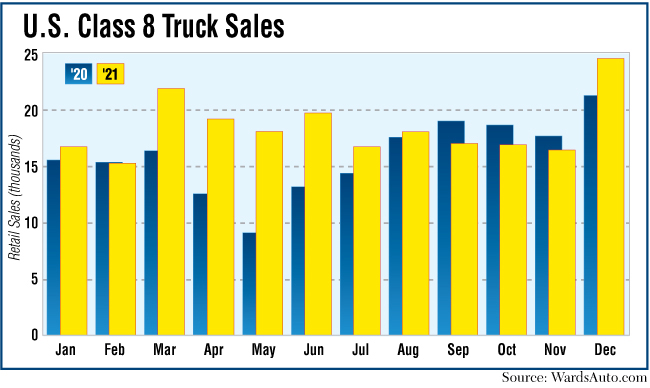 “We are very happy with how 2021 ended,” said Magnus Koeck, vice president of the strategy division at VTNA.

December was the truck maker’s best month of the year, Koeck said. “Knowing we had eight weeks of an employee strike during the summer we are very pleased we managed to increase our year-over-year U.S. market share by 0.3% to 10% compared with 2020. Going forward, we expect the industry will continue to face supply chain constraints as well as labor shortages. This will impact the retail numbers in 2022 as demand continues to outpace supply.”

But Kenworth saw December sales fall 12.8% to 3,680 compared with a year earlier. Nonetheless, it notched a 14.9% share — the second highest overall in December.

International, a unit of Traton Group’s U.S. subsidiary Navistar, had sales drop 6.2% to 2,131 compared with a year earlier. It earned an 8.6% share.

Meanwhile, the price of steel is expected to stabilize in the first quarter then fall throughout the year, said Steve Latin-Kasper, senior director of market data for NTEA — The Association for the Work Truck Industry, during a recent online presentation. Aluminum is near its price peak.

Those trends could help truck makers in their efforts to set a firm price for new trucks.

But labor market imbalances will just get worse as we go through this decade, he said. “As we get to 2025, it will be the first year in a long time that the United States labor market registers fewer new entrants to the market than retirees. So as bad as labor market issues are right now, we haven’t seen the worst of it in all likelihood.”

Ake agreed: “The domestic sources [for truck parts] are having problems making enough units just because they still can’t get enough workers to make those units.”

That comes as the overall manufacturing sector has heated up, he said.

As of December, manufacturing recovered 1.2 million of 1.4 million jobs lost in March and April of 2020, according to the Bureau of Labor Statistics.

“If the truck component suppliers could start supplying, magically, next month then the truck makers would have to hire significantly more people, and that would be a problem. The idea is all this gradually improves throughout the year and the production numbers go up,” Ake said.

ACT is expecting an 11% increase in sales in 2022 compared with last year.

“It will be lumpy; there is an inherent assumption of progress with the supply chain,” Tam said. “But there’s also an air of caution.”

Other truck makers did not respond to a request for comment.