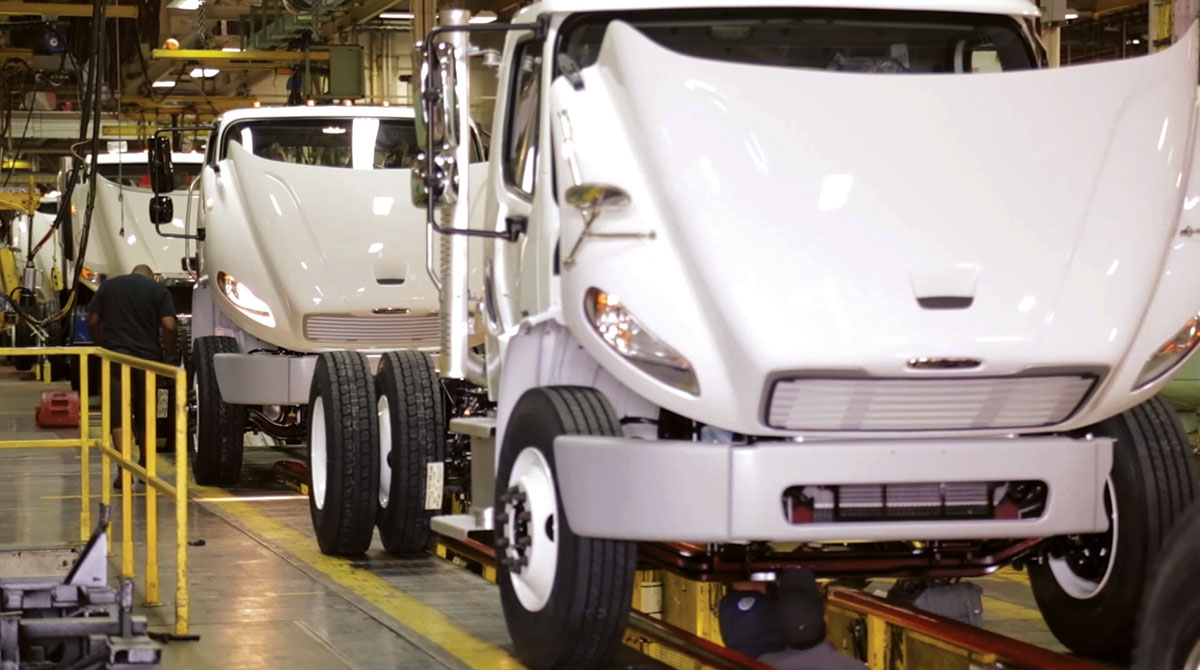 Freightliners in production at the Mount Holly, N.C., plant. (DTNA via YouTube)

Preliminary net Class 8 orders for October, typically a bellwether month, were nearly 40,000 and the highest in 24 months, ACT Research reported.

“What we saw was kind of the normal seasonal spike that is becoming relevant again. OEMs probably all have their books open for next year’s equipment. And I think you saw the big fleets coming in and negotiating their trade packages for the year,” ACT Vice President Steve Tam told Transport Topics.

Preliminary NA Class 8 net orders in October were 38,900 units, up 27% from September and a 78% improvement from year-ago October.https://t.co/GqYdILtTVl#truck #semitruck #trucking #transportation pic.twitter.com/VAOvksS39o

Scarce capacity and strong consumer freight growth has led to truckers’ profitability in that space “being crazy good right now,” he added.

North American Class 8 replacement levels are about 20,000 a month.

Saying an inflection point has been reached, Tam forecast trucks will begin entering fleets faster than others leave. That will have the effect of pulling the next peak of the cycle that much closer — with eventually too many trucks for too little freight.

Meanwhile, unemployment remains high and the emerging recovery from the pandemic-driven recession is viewed by some as a K-shaped event — with some people and businesses benefiting from conditions and others much less so.

“There’s a real bifurcation in the marketplace,” Tam said. “We will get back to where we were, and then some,” provided there are no more major disasters.

“October was a very impressive month. The fleets are still expecting business to be as strong as it is now out through at least the middle of 2021,” said Don Ake, FTR vice president of commercial vehicles. 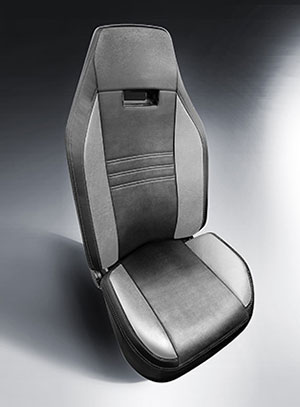 He added that the orders were even higher than OEMs were expecting, and now small and medium-size fleets will take their cue from what the big fleets ordered in October.

Ake said big fleets placed the orders with the confidence they will be able to add enough drivers to fill the seats, despite reports that drivers left the industry amid hardships as the pandemic spread and many have not returned yet.

“I think that’s the way the industry has operated for the last five years,” he said.

In the meantime, one freight brokerage executive said he anticipated rates staying on the high side through the first half of 2021.

“Seventy percent of our business is in the food and beverage space, meaning it’s time-sensitive. Sourcing carriers with newer equipment gives us more confidence that our customers’ products will be delivered on time due to less mechanical failures,” Humrichouser said.

Jefferies Equity Research analyst Stephen Volkmann wrote in a note the COVID-19 recession is likely to accelerate the shift in logistics share “from smaller to larger fleets, who tend to be less volatile in their order activity.”

While orders climbed, one OEM announced a redesign to the seats in three heavy-duty models.

The redesigned seat back contours to better line up with the driver’s spine, according to the Greensboro, N.C.-based unit of Volvo Group. The Mack Premium Comfort 2.0 seat also offers lumbar adjustments and heat options. It is standard on all Mack Anthem, Pinnacle and Granite models for all trim levels in the driver and passenger seat positions.

“Mack also changed the stitch lines on the seat back to support the new contour,” Russoli said. 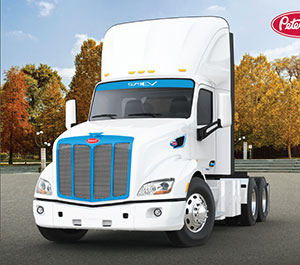 The Peterbilt 579EV is eligible for a $150,000 voucher through the state of California. (Peterbilt)

Another OEM opened its order board for the first time for its heavy-duty, battery-electric truck.

Peterbilt Motors Co. said its 579EV model sold to customers in California is eligible for a $150,000 voucher through the state.

With a range of 150 miles, it is available in a tandem drive configuration with Meritor 14Xe e-axle motors providing power through the drive inverters. Production is expected to start by the second quarter of 2021, according to the company, a unit of Paccar Inc.

Tam said there is a natural progression in the process of introducing alternative-fuel commercial vehicles.

“We finally have some product offerings,” he said, “but we don’t have much in the way of adoption. If memory serves, in the whole Classes 4-8 realm, there are maybe a few thousand electric vehicles on the road today, and the largest chunk of those are buses, not trucks.”