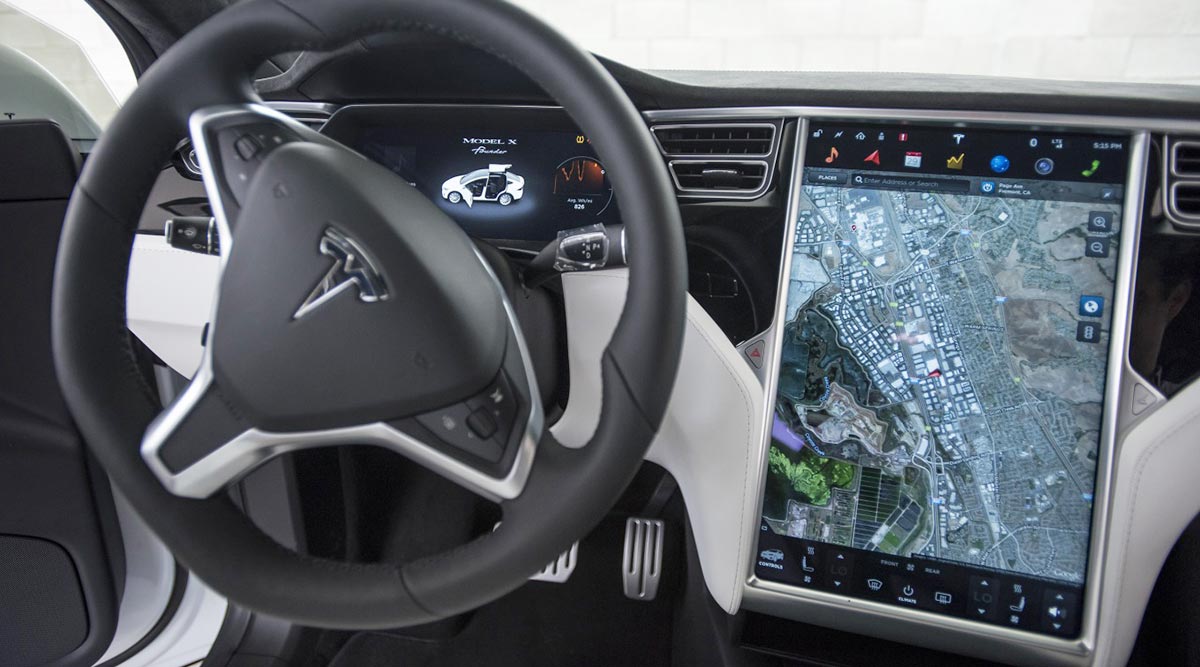 A look at the technology outfitted in a Tesla vehicle. (David Paul Morris/Bloomberg News)

Tesla Inc.’s calling used to be bringing affordable electric cars to the masses. Elon Musk is now ripping up the script, vowing to pair self-driving technology with a sharing service that will make it crazy for consumers to buy other cars.

The CEO said that by the middle of next year, 1 million Teslas will be on the road that are fully capable of driving themselves. During an hourslong investor day presentation focused on autonomy, Musk said customers will be able to put their cars onto a shared network of robotaxis, which will be able to get around without a human inside.

Even for Musk, 47, who’s never shied away from outlandish predictions, the timeline is hugely ambitious. Alphabet Inc.’s Waymo, widely thought to be a leader in the autonomous space, has shied away from letting its autonomous vehicles roam without safety drivers. But with Tesla facing mounting concerns about demand for its electric cars, Musk said both the company and its customers will reap major monetary benefits once self-driving robotaxis are ready for prime time.

“The fundamental message that consumers should be taking today is that it’s financially insane to buy anything other than a Tesla,” Musk said April 22 at Tesla’s headquarters in Palo Alto, Calif. “It will be like owning a horse in three years.”

The catch for Tesla investors is that all this is going to be costly in the near term. When asked how much autonomous technology is costing Tesla, Musk responded: “It’s basically our entire expense structure.”

Our new Full Self-Driving Chip houses 6 billion transistors and is capable of processing up to 2300 frames per second – a 21x improvement over previous gen hardware pic.twitter.com/39g39lv638 — Tesla (@Tesla) April 23, 2019

Whereas Tesla has said in the past that it expects to be cash-flow positive in every quarter beyond the first three months of this year, Musk now says the goal is to be cash-flow neutral while it is building up a fleet of self-driving vehicles that will make their way into the robotaxi service.

“Between now and when the robotaxis are fully deployed throughout the world, the sensible thing for us is to maximize the number of autonomous units made and drive the company toward cash-flow neutral,” Musk said. “Once the robotaxi fleet is active, I would expect to be extremely cash-flow positive.”

For years, the promise of Tesla hinged on bringing a $35,000 Model 3 sedan to the mass market. Earlier this month, Tesla made it impossible for customers to order that version of the Model 3 online. Customers who choose to lease a Model 3 aren’t going to be able to buy the car at the end, as leased cars ultimately will be be used in the company’s network.

When one analyst told Musk that it sounded like Tesla was making a massive balance-sheet commitment to autonomy and asked about the company’s financing strategy, the CEO dropped a hint that a fund raise may be in the offing.

“It was a curated route, and it did a great job,” Loup Ventures analyst Gene Munster said. “It showed me that Tesla has made a lot of progress. If you were there in person, it was hard not to drink the Kool-Aid. They’ll capitalize on this to raise money, and that de-risks the business.”