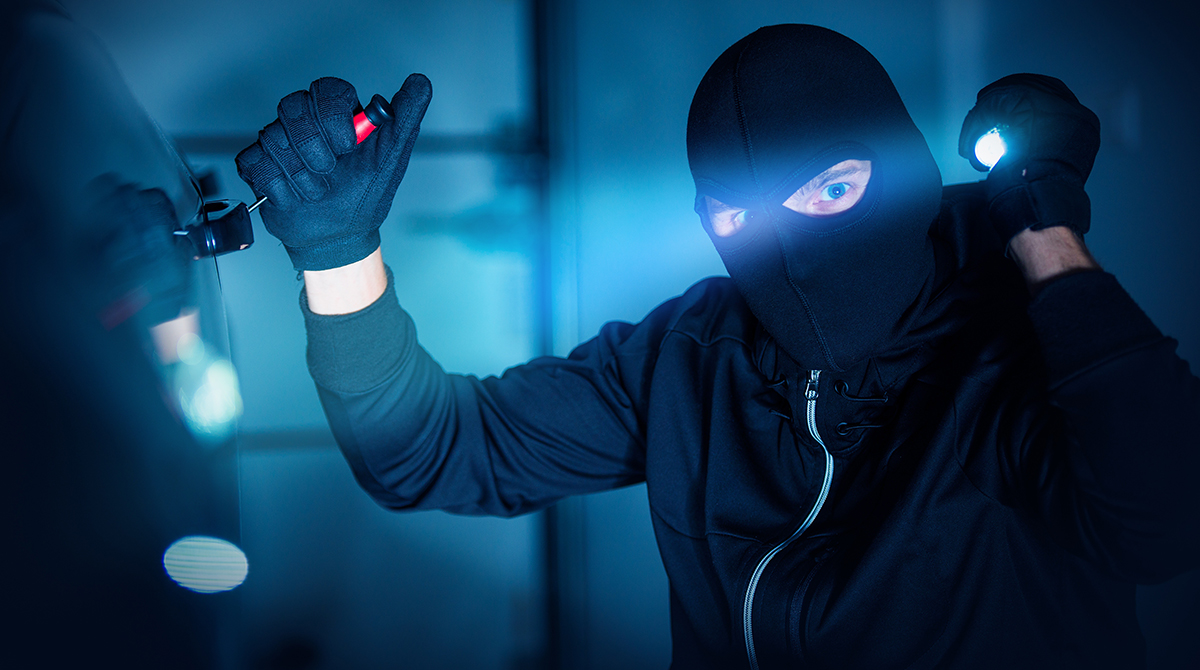 Thieves stole $17.2 million worth of cargo in the United States and Canada during the second quarter of 2017, down from $35.1 million in the year-ago period, data tracking firm CargoNet reported.

The number of thefts also declined, to 296 from 375 in the second quarter of 2016, according to CargoNet.

While California and Texas remain first and second as the most popular states for thieves, both recorded drops in the number and value of thefts, with declines of 53% and 51%, respectively. 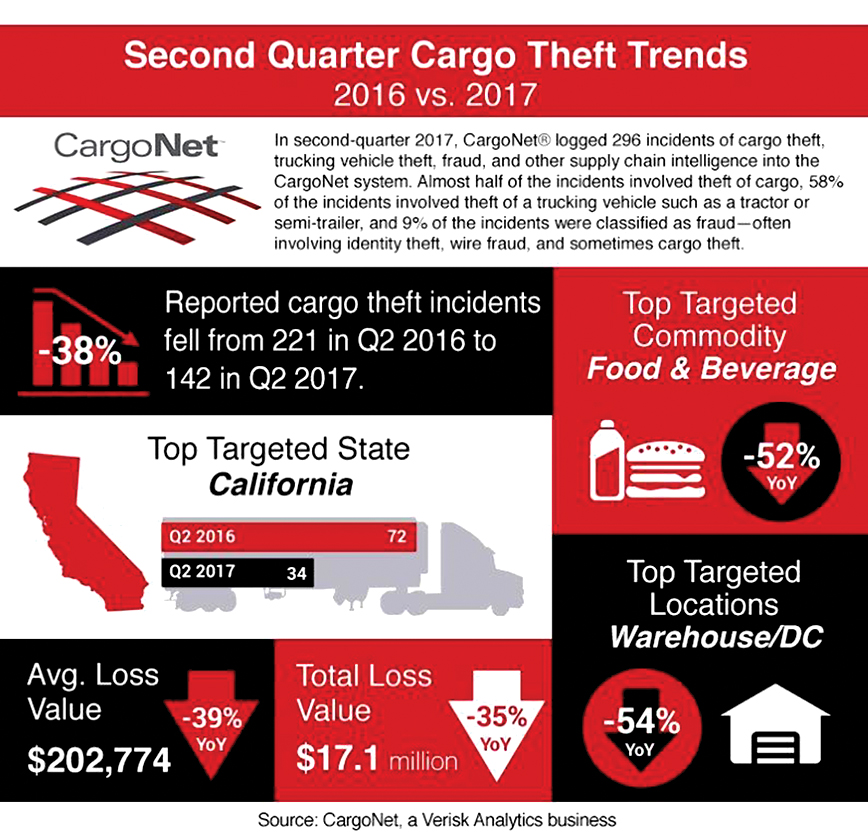 CargoNet said that the food and beverage category remains the most active, accounting for 20% of thefts. While that is a decline of 5% versus year-ago levels, thefts of second-place household goods rose 4%, accounting for 19% of thefts. Electronics lands in third place, with 11% of thefts, versus nearly 15% for the second quarter of 2016.

While the reported declines are welcome news, Scott Cornell, transportation lead and crime and theft specialist at The Travelers Companies Inc., noted that reporting and enforcement can affect the numbers. CargoNet’s members report voluntarily, and sometimes that means underreporting of thefts, he said. “I’m not saying all of the decrease is due to a lack of reporting, though,” he noted. “I think a big part is due to the arrests, and [to] some [extent] the underreporting or change in reporting, the fluctuation.”

In terms of enforcement, high-profile busts can raise alarm among thieves.

Cornell said that from 2016 into early 2017, “there were a ton of arrests made for cargo theft” such as in Georgia, California and Florida. “Florida and Georgia worked very well together, with the Miami Dade and Georgia task forces making numerous arrests. In Southern California, the [Los Angeles Police Department] made numerous arrests and that will reduce cargo thefts.”

In California, enforcement on a specific type of crime netted results, said Keith Lewis, vice president of operations at CargoNet. “Last year and the year before, California was getting killed with fictitious pickups, what some call ‘strategic thefts,’ ” Lewis said. He described the scenario where a “bad guy” would go on a load board using a stolen ID and steal a load. “There are about 38 fewer or so this year, and that’s attributed to a gallant effort by the California Highway Patrol and a lot of local agencies out there working together.” He noted the arrest last year of a group focused on stealing “high-end” nuts — pistachios, walnuts, almonds. “Through hard work with California law enforcement ... quite a few arrests were made,” Lewis said.

Lewis noted that California has been joined by Georgia and Florida, CargoNet’s fifth most-popular state for theft, in going after criminals. “In Georgia they have a new, very strict, very defined cargo theft penalty, and they had convictions last year and early this year of [members from] one local organized group and one other group from South Florida,” he said.

Cornell cautions, however, that cargo thieves are resilient. “Usually it does not take long for new organizations or groups to backfill those vacancies” after a wave of arrests are made. It typically takes anywhere from six months to a year before new activity starts to creep up, he said.

Cornell added that unlike in auto theft and some other criminal activity, some states no longer have specific enforcers to address cargo. In Texas, he pointed out, they have eliminated cargo thief-specific enforcers. “The state is in the top three or four for cargo theft; it’s always in that top category but doesn’t have a dedicated task force,” he said.

Steve Schiesl, compliance director with Hub Group, which is based in Oak Brook, Ill., said “the industry itself has gotten smarter in detecting potential cargo theft organizations.”

Technology is helping, he said, pointing to a GPS tracking system in Hub Group’s 33,000 containers. The company employs door sensors on containers that send alerts to Hub’s telematics group if a unit is stolen and the door has been opened.

“We had an incident in which we worked closely with CargoNet, where a unit was stolen in Florida. Our telematics group was able to detect exactly where the door was open and where thieves were checking the freight to see what they had.” The cargo, Schiesl noted, was barbecue grills. “It turns out the FBI had been tracking a cargo theft ring using that location. That door sensor sent off the exact longitude and latitude [of the attempted crime] and recovered four loads intact. We also were able to catch the thieves in action with other carrier loads and break up that cargo ring.” He added, “The load itself may not have had a high dollar value, but they were the type of items that could be easily resold by a thief. What can be resold is most interesting to cargo thieves.”

The numbers of trucks and trailers stolen in the United States and Canada also declined last quarter, with thieves snagging 110 tractors and 109 trailers. Thefts of tractors were down 17% and thefts of trailers declined 29% compared with year-ago levels. More intermodal chassis and containers were stolen, 25 in the second quarter this year compared with 21 in the same period in 2016.