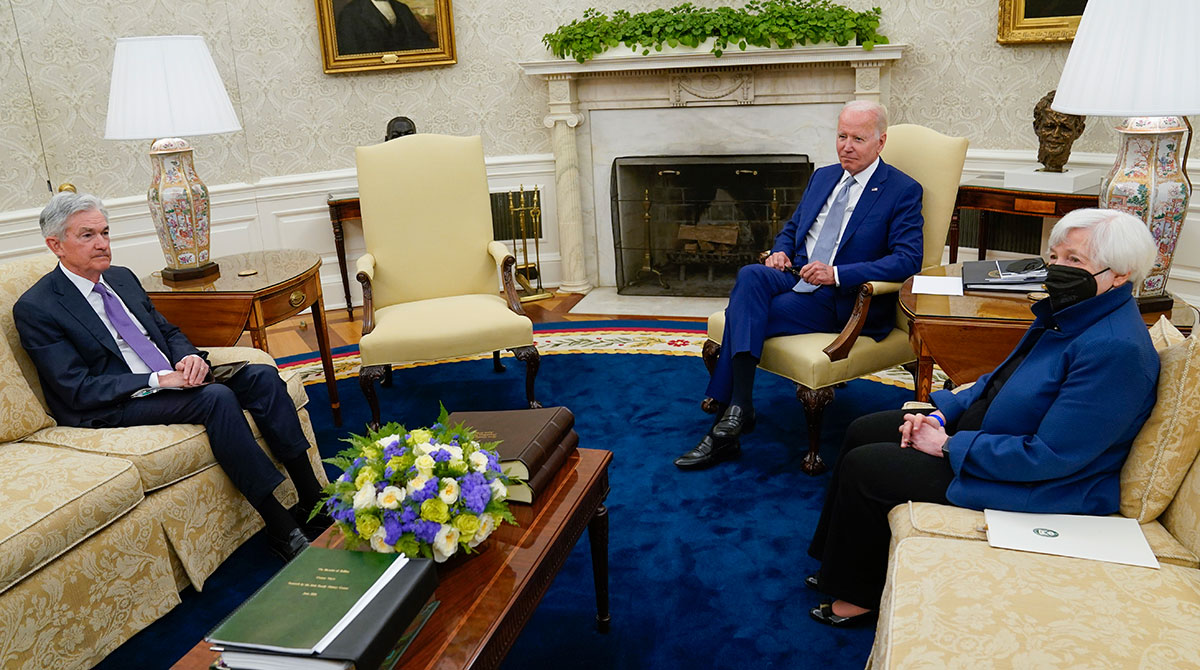 WASHINGTON — Focused on relentlessly rising prices, President Joe Biden plotted inflation-fighting strategy May 31 with the chairman of the Federal Reserve, with the fate of the economy and his own political prospects increasingly dependent on the actions of the government’s central bank.

Biden hoped to demonstrate to voters that he was attuned to their worries about higher gasoline, grocery and other prices whiles insisting an independent Fed will act free from political pressure.

Like Biden, the Fed wants to slow inflation without knocking the U.S. economy into recession, a highly sensitive mission that is to include increasing benchmark interest rates this summer. The president said he would not attempt to direct that course as some previous presidents have tried.

President Biden’s economic plan has led to one of the strongest job markets in U.S. history.

While this next phase of growth will look different from the last year, @POTUS’s top economic priority is addressing inflation and lowering costs for families. https://t.co/dC4qAXKxwx — The White House (@WhiteHouse) May 31, 2022

“My plan to address inflation starts with a simple proposition: Respect the Fed, respect the Fed’s independence,” Biden said.

The sit-down was Biden’s latest effort to show his dedication to containing the 8.3% leap in consumer prices over the past year. Rising gas and food costs have angered many Americans heading into the midterm elections, putting Democrats’ control of the House and Senate at risk.

Biden is running out of options on his own. His past attempts — oil releases from the strategic reserve, improving port operations and calls to investigate price gouging — have fallen short of satisfactory results. High prices have undermined his efforts to highlight the low 3.6% unemployment rate, leaving a growing sense of pessimism among Americans.

The meeting was the first since Powell was renominated in November by Biden to lead the central bank and came two weeks after his confirmation for a second term by the Senate.

It also represented something of a reversal by Biden as inflation weighs heavily on voters’ minds. The president asserted in April 2021 that he was “very fastidious about not talking” with the independent Fed and wanted to avoid being seen as “telling them what they should and shouldn’t do.”

The White House, along with the Fed, initially portrayed the inflation surge as a temporary side effect caused by supply chain issues as the U.S. emerged from the pandemic. Republican lawmakers were fast to criticize Biden’s $1.9 trillion coronavirus relief package from last year as pumping too much money into the economy and causing more inflation. That narrative also has held some sway with leading economists who say the financial support was excessive.

Inflation has shown signs of moderating but is likely to remain far above the Fed’s 2% target through the end of this year. Gas prices are expected to keep rising, particularly now that the European Union has agreed to cut off 90% of its oil purchases from Russia. That will force the EU to buy more oil from elsewhere, and it drove oil prices to $115 a barrel May 31.

This was only the fourth meeting between the president and the Federal Reserve chair, though Powell breakfasts as often as once a week with Treasury Secretary Janet Yellen, who also attended the meeting along with Brian Deese, the White House National Economic Council director.

Ahead of the meeting, Biden suggested that he and Powell were aligned on addressing inflation.

“My predecessor demeaned the Fed, and past presidents have sought to influence its decisions inappropriately during periods of elevated inflation,” Biden said in an op-ed posted May 30 by The Wall Street Journal. “I won’t do this. I have appointed highly qualified people from both parties to lead that institution. I agree with their assessment that fighting inflation is our top economic challenge right now.”

In contrast, President Donald Trump repeatedly attacked Powell after the Fed chair oversaw moderate interest rate hikes in 2018 and continued his public criticism even as Powell cut rates in 2019.

Biden’s endorsement of the Fed’s policies — a stance echoed by congressional GOP leaders — gives Powell important political cover for a series of sharp interest rate hikes intended to rein in higher prices. Yet the higher rates could cause layoffs, raise the unemployment rate and even tip the economy into recession.

Amid worries that the U.S. economy may repeat the high, persistent inflation of the 1970s, the cooperation between Biden and Powell represents a crucial difference from that time and could make it easier for the Fed to restrain higher prices. In the early 1970s, President Richard Nixon pressured Fed chair Arthur Burns to lower interest rates to spur the economy before Nixon’s 1972 re-election campaign. Nixon’s interference is now widely seen as a key contributor to runaway inflation, which remained high until the early 1980s.

“That’s why comparisons to the 1970s are wrong,” said Sebastian Mallaby, a senior fellow at the Council on Foreign Relations and author of a biography on former Fed Chairman Alan Greenspan, “The Man Who Knew.” “The president’s essay was striking because he explicitly backed the Fed.”

Biden faces an increasingly global challenge as energy and food costs have jumped after Russian President Vladimir Putin ordered the invasion of Ukraine in February. Simultaneously, China imposed lockdowns tied to coronavirus outbreaks that further strained supply chains. This has left the European Union nursing record inflation and the risks of a recession, while U.S. consumers are increasingly disgruntled by gas prices averaging a nominal record of $4.62 a gallon.

Powell has pledged to keep ratcheting up the Fed’s key short-term interest rate to cool the economy until inflation is “coming down in a clear and convincing way.” But those rate hikes have spurred fears that the Fed, in its drive to slow borrowing and spending, may push the economy into recession. That concern has caused sharp drops in stock prices in the past two months, though markets rallied last week.

Biden, in his op-ed, indicated that the record-setting pace of job creation in the aftermath of the pandemic would slow dramatically, suggesting more moderate levels of 150,000 jobs per month from 500,000. That, he said, would be no warning of weakness but “a sign that we are successfully moving into the next phase of recovery — as this kind of job growth is consistent with a low unemployment rate and a healthy economy.”

Employment Costs in US Increase by More Than Forecast