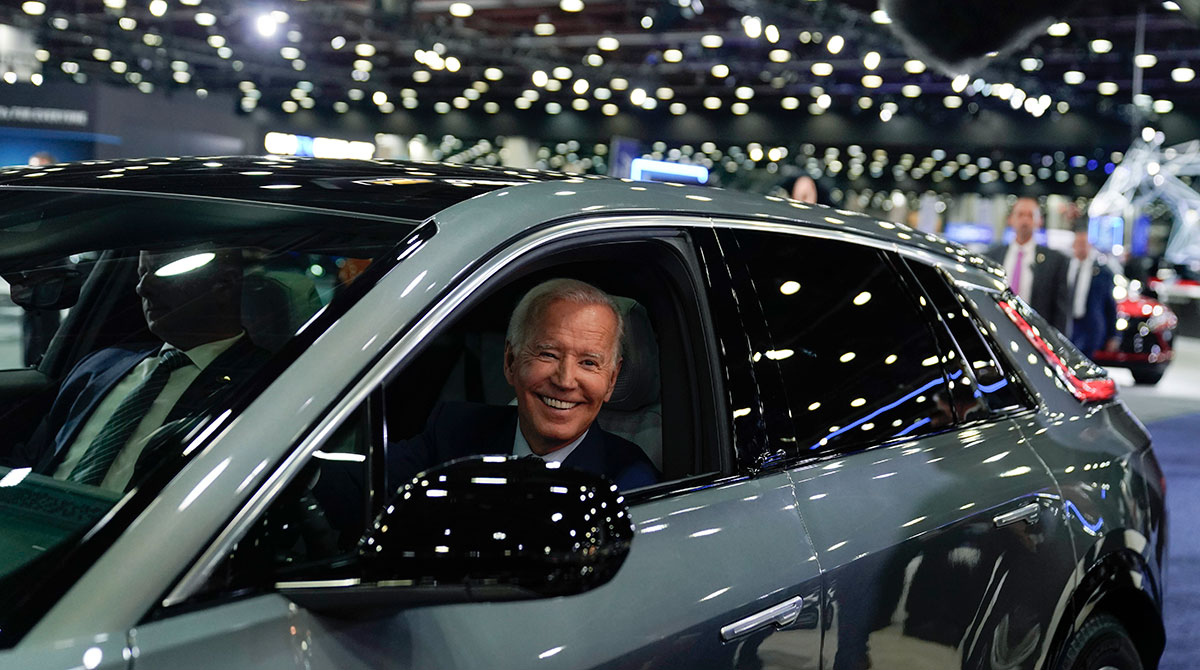 WASHINGTON — President Joe Biden, a self-described “car guy,’’ often promises to lead by example on climate change by moving swiftly to convert the sprawling U.S. government fleet to zero-emission electric vehicles. But efforts to eliminate gas-powered vehicles from the fleet have lagged.

Biden last year directed the U.S. government to purchase only American-made, zero-emission passenger cars by 2027 and electric versions of other vehicles by 2035.

“We’re going to harness the purchasing power of the federal government to buy clean, zero-emission vehicles,” the president said soon after his January 2021 inauguration. He has since used photo ops — taking a spin in Ford Motor Co.’s electric F-150 pickup truck, or driving GM’s Cadillac Lyriq electric SUV at the Detroit auto show — to promote their potential. Cabinet officials have hawked a first set of Ford Mustang Mach-E SUVs in use at the departments of Energy and Transportation.

The White House frequently describes the 2027 timeline as on track. But the General Services Administration, the agency that purchases two-thirds of the 656,000-vehicle federal fleet, says there are no guarantees.

Then there is the U.S. Postal Service, which owns the remaining one-third of the federal fleet. After initially balking and facing lawsuits, the agency now says that half of its initial purchase of 50,000 next-generation vehicles will be powered by electricity. The first set of postal vehicles will hit delivery routes late next year.

Climate advocates say that agency can do even better.

About 30% of U.S. greenhouse gas emissions come from the transportation sector, making it the single-largest source of planet-warming emissions in the country.

Electrification of the federal fleet is a “cornerstone” of Biden’s efforts to decarbonize the federal government, said Andrew Mayock, chief federal sustainability officer for the White House.

“The future is electric, and the federal government has built a strong foundation ... that’s going to deliver on this journey we’re on over the next decade,” he said in an interview.

Excluding the Postal Service, about 13% of new light-duty vehicles purchased across the government this year, or about 3,550, were “zero emissions,” according to administration figures provided to The Associated Press. The government defines zero emissions as either electric or plug-in hybrid, which technically has a gas-burning engine. That compares with just under 2% in the 2021 budget year and less than 1% in 2020.

Nationwide, about 6% of new car sales are electric.

When it comes to vehicles actually on the road, the federal numbers are even smaller. Many of the purchases in recent months won’t be delivered for as long as a year due to supply chain problems.

Currently just 1,799 of the 656,000-vehicle federal fleet are zero-emission vehicles.

“It hasn’t been exactly a fast start,” said Sam Abuelsamid, principal mobility analyst for Guidehouse Insight. “It’s going to be challenging for them probably for at least the next year or two to really accelerate that pace.”

The agency pointed to a limited EV supply from automakers with big upfront costs. In addition, it said the needs of agencies are often highly specialized, from Interior Department pickup trucks on large rural tribal reservations to hulking Department of Homeland Security SUVs along the U.S. border.

Agencies also need easy access to public EV charging stations. The White House has acknowledged agencies are “way behind” on their own charging infrastructure, with roughly 600 charging stations and 2,000 total chargers nationwide.

While Biden’s bipartisan infrastructure law provides $7.5 billion to states to build out an EV charging network of up to 500,000 chargers over several years along interstate highways, no money from that law was earmarked for federal agencies’ specialized needs. Money for charging stations must be allocated in each department’s budget.

Meeting Biden’s goal for the federal fleet is contingent on industry increasing production as predicted beginning in 2025 and 2026, analysts say. By that time, the effects of big federal investments to build public chargers and boost EV manufacturing in the U.S. will likely be felt alongside tougher rules for automakers to curtail tailpipe emissions.

The White House has declined to set a specific goal for EV purchases in 2023, but Mayock said he expects the number to be higher than 13%.

While the Postal Service is an independent agency, it plays an essential role in fleet electrification, not only because it owns 234,000 vehicles in the federal fleet, but also because the familiar blue-and-white mail trucks are by far the most visible federal vehicle, rolling into neighborhoods across America each day.

The agency plans to buy up to 165,000 of next-generation vehicles over a decade. The Postal Service remains “committed to reducing our carbon footprint in many areas of our operations and expanding the use of EVs in our fleet is a priority,’’ said spokesperson Kim Frum.

White House officials say government EV purchases can only increase exponentially after a near-zero baseline a few years ago under President Donald Trump, who sought to loosen fuel economy requirements for gas-powered vehicles and proposed doing away with a federal tax credit for electric cars.

At a recent EV demonstration at a Federal Law Enforcement Training Center outside Washington, officers test-drove EVs outfitted for police use, including the Ford Mustang Mach-E. Officers were impressed with the EV’s acceleration and “nimbleness,″ Mayock said, calling the test drives “a big change-management moment for the government.