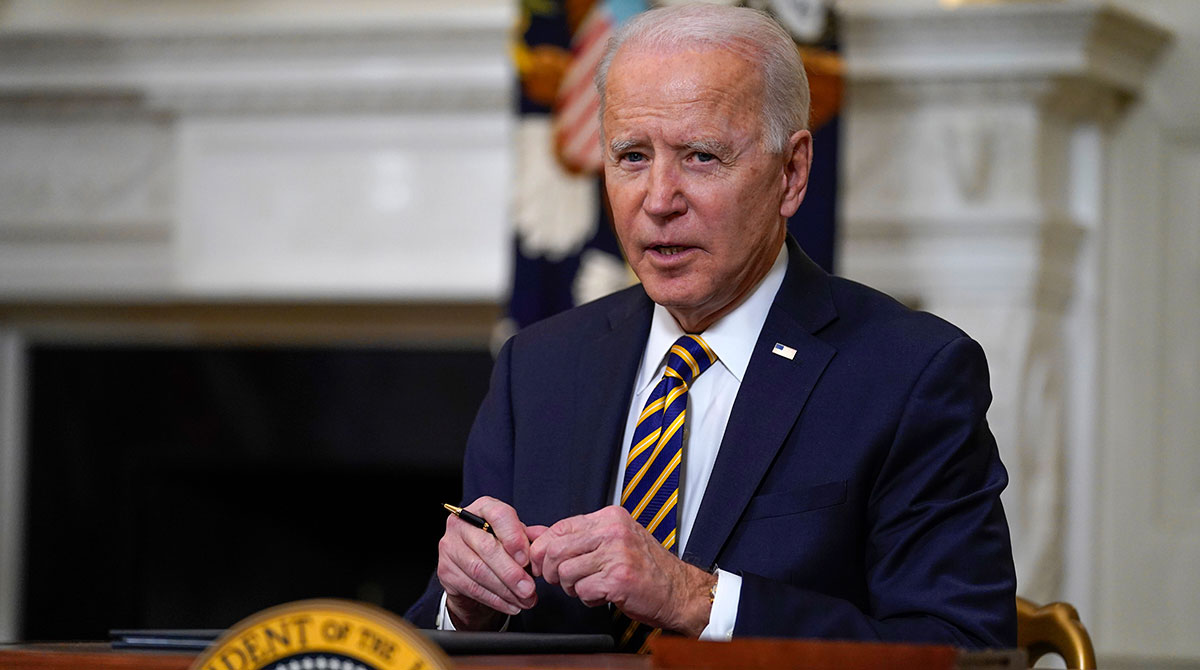 President Joe Biden said his administration has made strides toward relieving U.S. supply chain disruptions, as he met Nov. 29 with the leaders of major retailers including Walmart Inc. who assured him they have ample inventories for the holiday season.

The meeting, and Biden’s remarks, were intended to reassure Americans anxious about the lingering pandemic and its impact on the economy. Polls indicate a majority of voters believe the country is headed in the wrong direction, despite reduced unemployment and growing economic output under Biden.

“We’ve seen some progress” in tackling logjams at ports, Biden told the business leaders who gathered at the Eisenhower Executive Office Building. He said his administration’s discussions with port companies and labor unions have contributed to a 40% decrease in the number of containers sitting at docks for eight days or longer.

“We keep building on that progress,” he said.

Record U.S. demand for imports is contributing to an unusually steep increase in consumer prices this year. The White House said in a blog post Nov. 29 that imports are up 16% year-to-date compared with the nation’s previous peak, in 2018, but that stocks at grocery and drug stores nonetheless are at nearly the same level as before the pandemic.

The blog post also noted further operational improvements at the ports of Los Angeles and Long Beach, Calif., which together are the nation’s busiest. Companies operating the ports will eliminate fees for shipping containers picked up at night and on weekends, instead of during peak hours, while one of the world’s biggest ocean carriers is offering as much as $200 per container in incentives for shippers to help clear the ports’ backlog by retrieving their goods faster.

Biden’s session with retailers came on the heels of the start of the holiday shopping season over the weekend. The meeting also included executives from businesses that sell electronics, toys, clothing and other items that are common gifts.

“I want to hear from each of you about what you’re seeing this holiday season,” Biden told them. “How well prepared are you to have products you need on your shelves? And how you’ve innovated and hired to overcome the supply chain challenges and keep workers safe from COVID-19 so that American people can have a holiday season they’ve been long hoping for.”

Biden added that he was especially interested in how small businesses are managing supply chain issues and in “how the federal government can continue partnering with you all to keep shelf stock so American consumers can get what they need.”

McMillon told Biden, “While we’re all concerned about the supply chain, we have more inventory than we did a year ago and have the inventory that we need to be able to support the business.”

He said port and transit delays “are improving.”

“There are a few items — as are every year with the hottest toys or things in electronics — that we wish we had more of, but generally speaking we’re in good shape,” he said.

With his approval ratings flagging, Biden has been working to show both empathy and action in tackling supply chain issues, as well as inflation and its impact on American pocketbooks as the U.S. enters its holiday season.

The U.S. consumer price index, a broad survey of inflation, increased 6.2% last month from October 2020, the fastest annual pace since 1990. While many economists believe the abnormal inflation is due to unprecedented consumer demand after the pandemic shutdowns, Republicans have blamed Biden and his economic policies.

Biden postponed a speech on supply chain troubles and the economy planned for the afternoon on Nov. 29 to ensure he had enough time with the retail CEOs, a White House official said. He’ll deliver the speech Dec. 1 instead.

Project at Port of Tacoma Aims to Relieve Congestion