Autonomous Trucking Startup Gatik Is Ditching the Driver in Canada 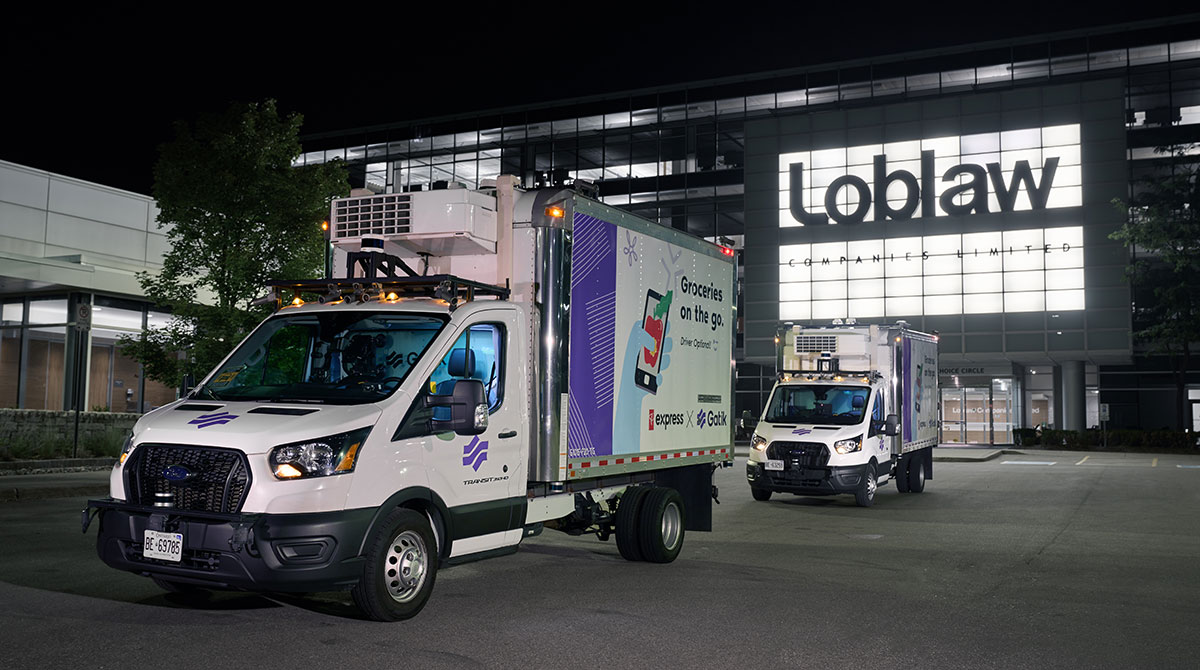 Loblaw Cos. Ltd. via Business Wire

Gatik AI Inc., a California-based autonomous driving startup focused on middle-mile deliveries, said Oct. 5 that it is taking the humans out of a 7-mile truck delivery route it runs for grocery giant Loblaw Cos. Ltd., Canada’s largest retailer.

Five-year-old Gatik has been operating driverless trucks in Arkansas for more than a year as part of a partnership with Walmart, but this is its first fully autonomous foray north of the border. The Canadian leg runs from a Loblaw fulfillment center northwest of downtown Toronto to one of the company’s nearby Real Canadian Superstores.

“This is the outcome of what we’ve been doing the last few years,” said Gatik CEO Gautam Narang. “Four-way intersections, bicyclists, pedestrians — the truck encounters all those things.”

Gatik’s progress is born of pragmatism. Rather than training its algorithms to handle any potential driving route in a defined area — as competitor Cruise accomplished with its ride-hailing service in San Francisco and Waymo managed in Phoenix — the company is focused on short, static routes that delivery trucks repeat on a loop. That use case provides a lower bar to clear in terms of autonomous safety, but it also maps a potential business model: Massive retailers like Walmart and Loblaw know how much they’re spending to schlep goods from warehouses to stores, and can easily model the financial gains from cutting human drivers out of the equation.

“At the moment, it’s cost-neutral for us,” said David Markwell, Loblaw’s chief technology and analytics officer. “As the number of trucks expands, and as the economics improve, we see savings over time.” Markwell said automated routes have been particularly useful for responding to an increase in the immediacy of grocery orders.

Gatik engineers and algorithms study a route for months before letting the robots steer, and are able to program specifically for certain sticky points. With no passenger, there’s nobody to get frustrated, for example, if the rig takes three rights instead of a left. And while the trucks still have human chaperones — one dedicated human per truck — they patch into the vehicle from a remote location. If the truck runs into trouble, it executes a “graceful recovery,” essentially pulling over and pinging its overseer like a lost teenager dialing dad.

To run driverless routes in Canada, Gatik received special approval from Ontario in April. More recently, Loblaw hired a third-party firm to stress-test the autonomous system, including with attempts to hack into it remotely and take control of a vehicle. Once Gatik passed the audit, Loblaw’s board of directors gave its driverless trucks the green light.

The Canadian routes bring Gatik’s fleet of trucks to just over 30, though it expects to triple that number by 2024. A few months ago, the company partnered with Georgia-Pacific, a unit of Koch Industries, to ship toilet paper and other paper product to Walmart and Sam’s Club stores in and around Dallas. Koch Disruptive Technologies, another arm of the family-owned empire, led an $85 million Series B funding round for Gatik last year.