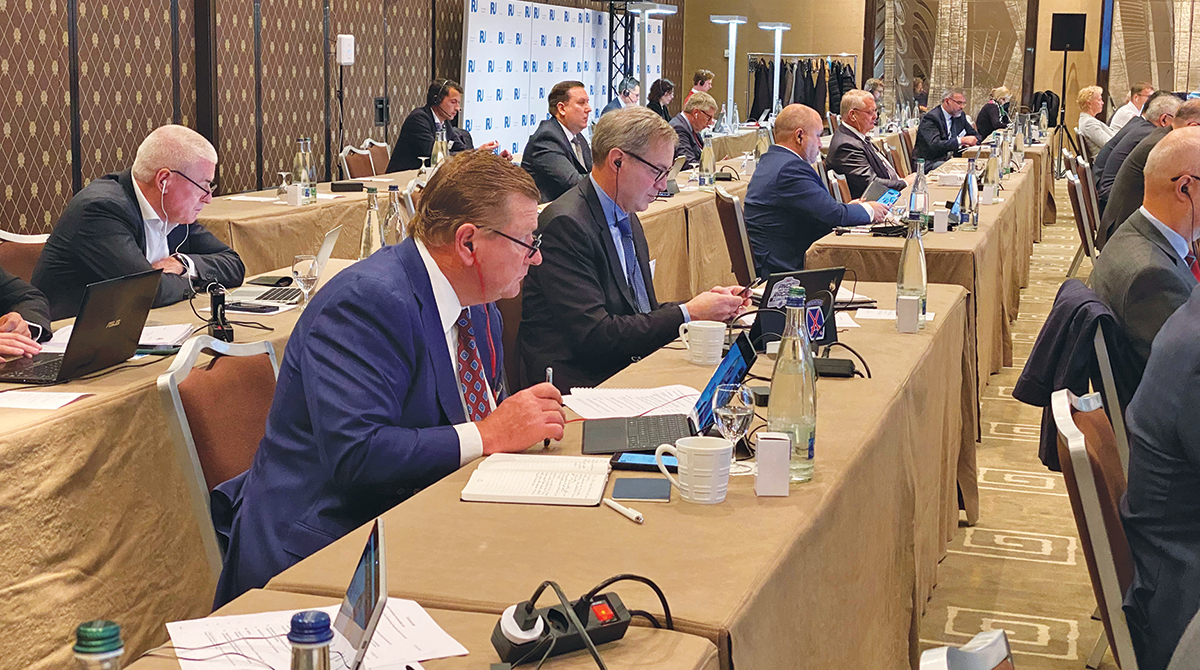 Sumerford (left) and Spear at a meeting at the conference. (American Trucking Associations))

Transportation leaders from around the globe discussed shared challenges during the first in-person meeting in two years of the International Road Transport Union, with supply chain snarls, a shortage of drivers and environmental issues at the top of the agenda.

The organization, which supports drivers and transport companies from around the world, held the meeting Nov. 4-5 in Geneva. The meeting included representation for the United States from American Trucking Associations, along with other North American leaders and representatives from Asia, Africa, South America and Europe.

“It was an opportunity to come together and discuss issues similar to what we do at MCE,” ATA President Chris Spear told Transport Topics, referring back to his group’s Management Conference & Exhibition annual meeting, held this year in October. Spear attended the IRU event with ATA Chairman Harold Sumerford Jr. and ATA Chief Economist Bob Costello. “We probably did not have one meeting that did not center around the driver shortage issue,” Spear said. “It’s chronic around the world and I think it’s amplified by the pandemic and the pressure it has put on the returning workforce.”

Earlier this year Costello said the U.S. is short 80,000 truck drivers, most notably for over-the-road duty in which drivers can be away from home for days and, in some cases, weeks.

“Not only do other countries have these issues, but they’re for the same reasons — it’s a high average age of drivers,” Costello told TT. “One of the things we talked about is that the European Union and the IRU are trying to lower the age for drivers from 21 to 18, like we just did in the infrastructure package.”

The $1 trillion infrastructure bill signed Nov. 15 by President Joe Biden included a provision to launch a program to train drivers younger than 21 to operate interstate, something that was previously prohibited by law. 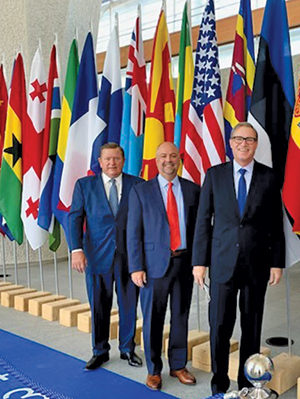 Costello added, “China has a labor shortage — a driver shortage — and it’s for the same reasons, lifestyle and time away from home. We’re all very similar in that regard.”

In the United Kingdom, some say a driver shortage estimated at 100,000 has been worsened by Prime Minister Boris Johnson’s actions to pull the country out of the European Union. Since January, after the UK completed the final stage of Brexit, employers who previously could freely recruit European workers no longer can, and critics say that is worsening the labor shortage.

The challenges U.S. truckers face to find safe parking may be worse in Europe, the ATA executives said.

“We saw this personally when we were driving on the highway,” Costello said. “There’s a lack of safe and secure parking in Europe. The trucks were lined up, even worse than they are in the U.S.”

Spear added, “I think they lack space, even more than we do, because Europe is so condensed. Real estate is probably in more demand there than it is here.”

Leaders at the meeting broadly agreed that issues contributing to global supply chain backups won’t be fully resolved until mid-2022 or later, possibly into the third quarter.

“They were very interested in the much more collaborative modes in the U.S., and I explained to them that trucks and trains are much more complementary than competitors,” Costello said.

In August 2019, the EU adopted standards for heavy-duty trucks that set targets for reducing average CO2 emissions from new trucks beginning in 2025, with tighter limits coming in 2030.

“Europe is moving so quickly and there is a growing disconnect between their ability to meet those technology timelines for adoption,” Spear said. “We have to have this conversation. They need to stop — in the U.S. and Europe — chasing rainbows and unicorns and start having a realistic discussion how we can go green, and how quickly we can actually do and manage those expectations with the American people and the European citizens, respectively.”

Spear noted that the ATA has a strong working relationship with the U.S. Environmental Protection Agency and its new administrator, Michael Regan.

“We at ATA have demonstrated here in the U.S. our willingness to shape sound, lasting policies with our federal regulators,” Spear said. “We have been at the table. We are moving our industry in this direction.”