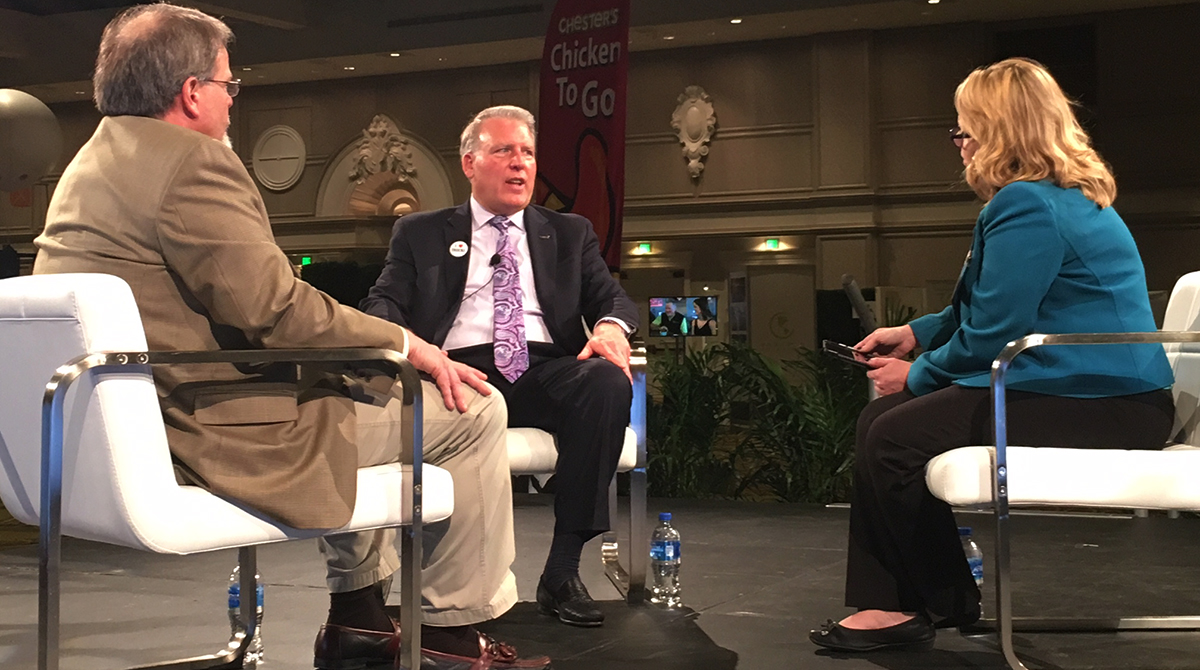 NASHVILLE, Tenn. — Two fleet executives doubt fully autonomous or electric trucks will revolutionize the longhaul truckload industry in the near future, foreseeing instead a gradual evolution for these technologies.

Speaking at the Natso Connect conference, TCW Inc. President and American Trucking Associations Chairman Dave Manning likened the future of automated trucks to airplanes, in which pilots remain actively engaged in the takeoff and landing but let computers handle routine portions of the flight. Such a scenario would qualify as Level 3 or Level 4 automation on the Society of Automotive Engineers five-point scale for automated technology.

Level 5 is complete automation without a steering wheel, accelerator or brake pedal.

“Drivers perform too many functions besides navigating the vehicle on the road,” Manning said. “They do the pre-trip [inspection] and fuel the truck. [For] Hazmat, someone has to be present with the load. Intermodal interchanging at the ports and railroads, a driver has to be there. When you get to the customer, someone has to sign the paperwork,” he said.

Dean Newell, vice president of safety and driver training with Maverick Transportation, said that while some of his fleet is graduating from Level 1 to Level 2, or to partial automation, there are situations in which full automation would be inadvisable.

The two were equally skeptical about electric vehicles becoming popular in over-the-road truckload, but saw potential for regional fleets that only travel a few hundred miles.

Tesla Inc. CEO Elon Musk boasted that the all-electric Class 8 Tesla Semi, slated to go on sale next year, will drive 500 miles on a single charge. The company also is collaborating with Anheuser-Busch, PepsiCo and UPS Inc. to build charging terminals for their distribution centers, according to Reuters.

Musk said on a recent earnings call that Tesla will manufacture 100,000 Semis annually within four years. But Tesla also unveiled the Model 3 to fanfare in March 2016, yet has fulfilled no orders almost two years later.

Manning and Newell also are skeptical about the Tesla Semi accelerating from 0 to 60 miles per hour in 20 seconds when carrying 80,000 pounds (five seconds when empty).

“That’s great until you think about how the cargo can weigh 40,000 pounds and the trailer is only 13,000. Under the current configuration, truckers would have a hard time containing the cargo inside the trailer because there will be a huge differential in the torque,” Manning said.

For Maverick Transportation, a flatbed carrier, the torque and the weight of the cargo may cause a major traffic problem.

“We haul steel and big-plate glass, so I don’t want to see a truck take off [that quickly] because I’m going to have glass or steel coils all over the road,” Newell said. “There will be applications that it’s going to work, but for the typical OTR fleet I don’t see it.”

In a panel discussion with Natso President Lisa Mullings, the executives also discussed how the electronic logging device mandate could exacerbate the frustration of truck drivers finding open spaces at nearby truck stops.

To address the shortage, Newell urged truck stop operators to provide accessible and frequently updated information about how many spaces are available at each of their locations. He noted that electronic logging devices will place a driver in service if a truck travels more than 5 miles per hour or travels a degree of longitude or latitude, making it imperative that drivers be able to quickly locate parking.

“In Oklahoma City, you have truck stops on the east side and west side. [So if] I’ve got 10 hours of drive time that I’ve already used, I have one hour left. If I knew how many parking spots were available on the west side inside the cab, my driver can make an informed decision to get over there,” he said.

Manning added, “If a driver spends 30 or 45 minutes finding a place to park, on a paper log that may not even show up but on an electronic log that will show up. There is zero tolerance to go over the 11 hours, so drivers will have to stop in advance.”