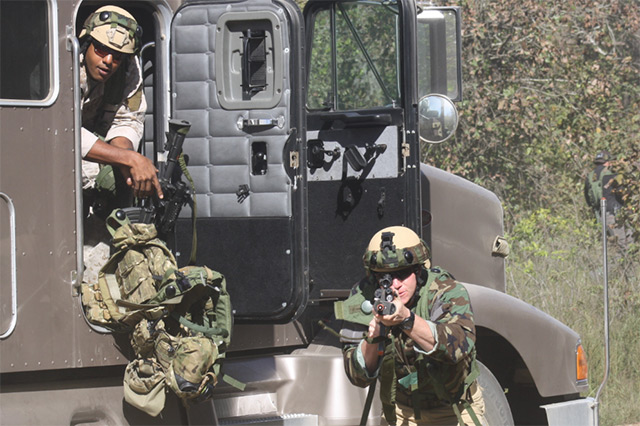 Arkansas 549 in Fort Smith, Arkansas, may not directly connect Kansas City to Lafayette, Louisiana, as Interstate 49 yet, but it has served as a smooth training ground for the National Nuclear Security Administration's Office of Secure Transportation.

No live nuclear warheads are used in the night-time training sessions that have occurred on Arkansas 549 since October when the highway closings were first publicly announced. The 6.5-mile stretch of interstate-quality highway at Chaffee Crossing opened last July. Arkansas 549 connects U.S. 71 in Fort Smith to Arkansas 22 in Barling.

Since it is lightly traveled and able to be completely closed off, the new road has proven a perfect training ground for training the office's nuclear warhead transporters.

"549 has given us a real unique opportunity to train in by far the most realistic environment," said Kerry Clark, acting deputy assistant administrator for the Office of Secure Transportation within the U.S. Department of Energy.

Clark said no nuclear waste is ever transported by the division, but interstates are the primary routes used when moving nuclear arms and warhead components by heavily armed convoys throughout the year. Most live nuke operations take place in the Southwest. Only props are used in the training exercises, Clark said.

In an effort to demystify the weekly night closings on Arkansas 549, Clark held a press briefing May 4 at the OST logistics office at Chaffee Crossing. However, since OST's operations are highly classified only the most relevant information could be provided.

Al Stotts with the National Nuclear Security Administration's Office of Public Affairs said avoiding accidents with the public is another goal of the briefing.

The Office of Secure Transportation is based in Albuquerque, New Mexico, with other agent command centers in Amarillo, Texas, and Oak Ridge, Tennesee.

Fort Smith is the headquarters of all the office's training and logistics activities, however, Clark said, and the local facility hosts five units for five weeks of training in intervals. There is a maximum of 75 agents in each unit, with usual numbers ranging from 50 to 60 agents.

Clark said the federal government has spent $211 million in Fort Smith since 2005 in relation to the training facilities, and the office expects to spend $30 million on them in 2016.

The training headquarters were moved to Fort Chaffee in 1999, but the office has had facilities there since the mid-1980s. Two of the office's senior managers are Vietnamese refugees who lived at Fort Chaffee in 1975 after the Vietnam War, Clark said.

Safety and security are the two main goals of the nuke transporters, Clark added. The security half of the mission is addressed by the "training and capabilities of the agents," who usually have military combat experience.

Of the 153 full-time personnel with the Fort Chaffee operation, 31 are federal agents and 121 are contractors working for support services. The local office has more than 15 classrooms at Fort Chaffee and the logistics hub of the office is in the 11400 block of Roberts Boulevard at Chaffee Crossing.

Although weather is a factor in transporting nuclear weapons, the office is more wary of other drivers than anything.

"A drunk driver who crosses the center line and runs into us is the probably the most likely threat we face," Clark said. "One of the beauties of our system is we don't have to go anywhere. If we decide there is bad weather there, then we just don't have to go."

Emergency maneuvers are also part of an agent's training. Clark said agents quickly rack up thousands of hours of training in the armored trucks and specialty trailers made by Honeywell in Kansas City. The office has transported more than 140 million miles over the road without the release of any nuclear material, he added.

"We try to take foreseeable scenarios and test them to that, and the trailers are incredibly robust," Clark said. "The trailer is essentially able to defend itself."

Clark was sure to thank the Arkansas Highway and Transportation Department for its cooperation in closing the highway for nuclear transport training operations.

"It's the ideal spot for training exercises like this," Straessle said.

Straessle, who said he has also mentioned the strip of road to the Arkansas Economic Development Commission's motion picture recruiting arm, said the state highway department expects the federal government to be able to conduct its training operations on Arkansas 549 at least until the state is able to extend the highway farther north.

A new bridge over the Arkansas River would be needed to connect Arkansas 549 north to Interstate 49. A request to fund more than $27 million in preliminary engineering for an I-49 bridge from Alma to Barling has been included in the draft 2016-20 State Transportation Improvement Plan. The bridge and related projects are expected to cost more than $235.4 million.