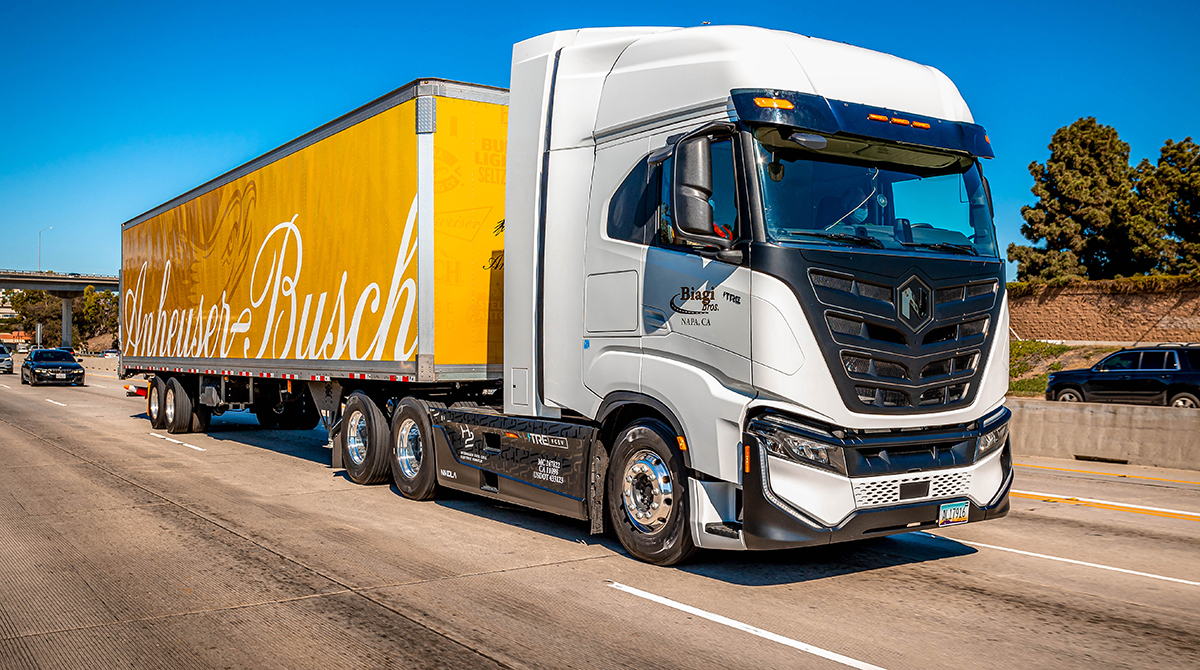 Anheuser-Busch teamed up with fleet partners Nikola Corp. and BYD Motors ahead of the Super Bowl to deliver Bud Light NEXT with zero-emission trucks.

Bud Light NEXT is Anheuser’s first zero carb beer that breaks the barriers of a traditional lager.

The special zero-emission delivery leveraged the technology of both partners to sustainably deliver beer from Anheuser-Busch’s brewery in Van Nuys, Calif., to bars and retailers in Los Angeles using only zero-emission vehicles.

The 2022 Super Bowl was played at SoFi Stadium in Inglewood, Calif., between the Los Angeles Rams and Cincinnati Bengals.

The extended range Nikola Tre hydrogen fuel cell electric vehicle picked up a load of beer from the brewery in Van Nuys, Calif., and delivered it to the Anheuser-Busch AB One distribution facility in Carson, Calif. From there, a BYD battery-electric 8TT day cab tractor delivered the beer to local bars and retailers to be enjoyed by consumers during the big game.

Anheuser-Busch is adding 20 additional BYD electric trucks to the 25 units it already operates across four California beer distribution centers. Of the initial 25 trucks, 21 were deployed in 2020 as part of the Zero- and Near-Zero Freight Facilities/Zero Emission Beverage Handling at Scale project in the state. Zero Emission Beverage Handling and Distribution at Scale is part of California Climate Investments, a statewide initiative that dedicates billions in cap-and-trade funding toward reducing greenhouse gas emissions, lifting the economy and improving public health and the environment, especially in disadvantaged communities.

In February, Anheuser-Busch and Nikola began a 3-month pilot by placing two Nikola Tre alpha FCEVs into daily service within the brewer’s Southern California network. They called the pilot an important step for both companies to refine the production specifications and features of the Nikola vehicles and to demonstrate the viability of fuel cell trucking and hydrogen refilling in beverage hauling.

In 2018, Anheuser-Busch entered into a partnership with Nikola for an order of hydrogen-electric powered semi-trucks to help transition its entire longhaul dedicated fleet to zero-emission vehicles.

Anheuser-Busch noted it has a global net-zero ambition and commitment to reducing carbon emissions across its U.S. value chain by 25% by 2025. — Transport Topics