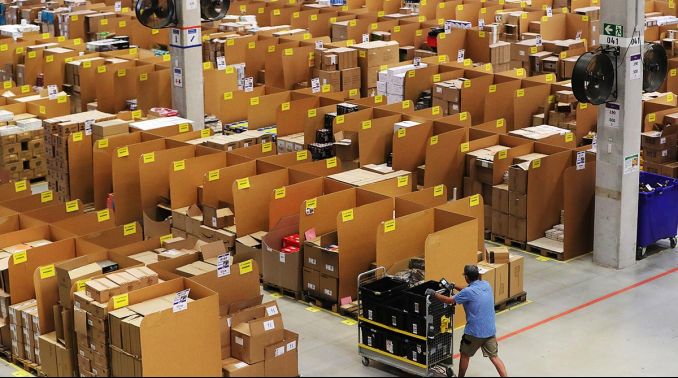 Amazon.com contributed more greenhouse gas emissions last year than some big competitors in retail, logistics and technology, but less than rival Walmart Inc. and the world’s biggest energy companies, highlighting the growing scale and diverse businesses of the conglomerate.

The disclosure by Amazon of its 2018 carbon emissions, 44.4 million metric tons of carbon dioxide equivalent, including purchased electricity and indirect emissions, came Sept. 19, when the company committed to powering all of its business operations by renewable energy sources by 2030, and achieving carbon neutrality a decade later. 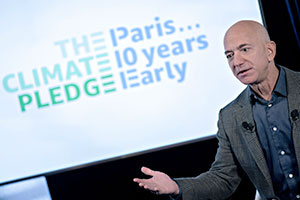 “It’s a big number,” said Bruno Sarda, president of CDP North America, adding that Amazon’s emissions compare with a large power company. “They probably wouldn’t make the top 50, but when you look at what’s up there, it’s mostly all the large fossil fuel companies.”

An Amazon spokesman said the company’s disclosures, which accounted for emissions generated by customer trips to retail stores such as Whole Foods, captured a fuller picture than those of some competitors.

Amazon for years has frustrated climate advocates by refusing to participate in increasingly common corporate social responsibility and environmental disclosures. But employees and shareholders have been pressuring the company to change. A shareholder proposal in May requesting an Amazon climate policy failed — but drew 30% of votes cast.

“We’ve been requesting this information from them for 15 straight years,” Sarda said. “They’re just not big fans of transparency, or using frameworks that others have developed to measure their performance.”

CEO Jeff Bezos acknowledged that Amazon had work to do.

“We’ve been in the middle of the herd on this issue, and we want to move to the forefront,” Bezos said at a news conference in Washington, where he encouraged other companies to set similar goals. “We want to be leaders.”

Some corporate governance and environmental groups praised the Seattle-based company for the steps it announced Sept. 19.

“It’s very important when a company like Amazon or Walmart takes major steps to be proactive on climate,” said Tim Smith, a director at Walden Asset Management and a longtime advocate of corporate action on issues of social responsibility. “I hope they’re getting the message that they received in the votes in the shareholders meeting, and from their customers, that they expect much of them.”

Amazon’s carbon footprint reflects the company’s move from a humble online retailer into a plethora of energy-intensive businesses, including running massive cloud-computing server farms, and, increasingly, hauling its own packages by plane and truck and delivering them to customers’ doorsteps. The figures the company disclosed include emissions produced by Amazon’s own operations, the electricity that powers its facilities and more indirect sources such as the cost of producing Amazon’s packaging and electronic devices.

The company’s turn toward transparency on climate issues wasn’t the first time a major technology company decided to grab the mantle of leadership on climate change. Apple has released an environmental impact report with increasing levels of detail for the past decade and stepped into the spotlight in 2013 when it hired Lisa Jackson, a former U.S. Environmental Protection Agency administrator, as vice president for environment, policy and social initiatives.

Apple started submitting investor disclosure information to the U.K. nonprofit CDP in 2014, the same year that CEO Tim Cook publicly snapped at a critic that if he didn’t like the company’s environmental policies he should “get out of this stock.”